The Seattle Sounders released a mobile app that initially seems redundant with the MLS app. Except for a few notable differences. It works. It has live gameday audio for league and non-league matches for the Senior team. It has fans interacting. It works. The app is being polished prior to development on other platforms, but it is expected to be out during this season on at least one other smart phone OS (either Android or Windows Mobile).

In the mean time the Seattle tech team is redeveloping the mobile web version of their site. It will have news, blogs, video, the full roster, stats and you should expect to see an announcement soon. Oh, again, it WORKS, even in beta.

Our southern brethren took an entirely different angle with their recent mobile app. 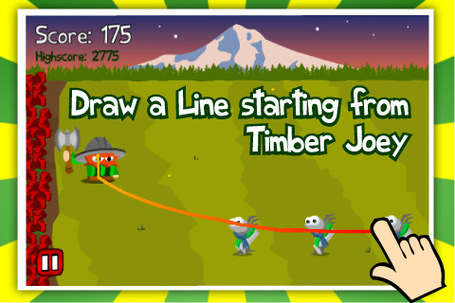 Yep, nothing says Major League Soccer like a game designed around cutting down cartoon versions of a derisive nickname of the opponent. Yes, it is real.

But you know what? It will work for them. Just like their season ticket advertisements aren't about soccer, neither is this. What this is, is an effort to feed their base. They do it well.

They know who they are. From front-office, through the coaches, to the players to the Timbers Army, they know who and what they are.

Both strategies are perfect for their markets. I'm also quite glad I'm in the city I am.