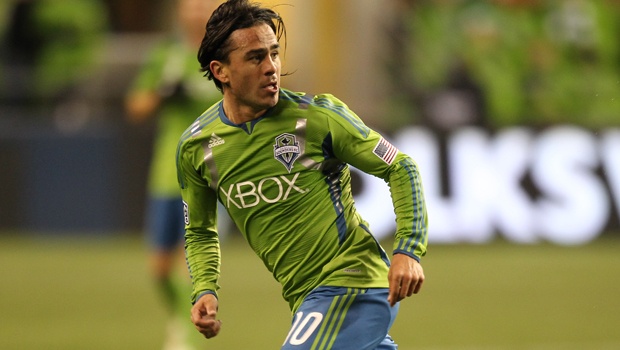 Full points for the first time this season.

Go ahead, take a deep breath. It feels good, no? Seattle are no longer sitting at the bottom of the Western Conference table. After a 2-1 home win over the Chicago Fire, the Sounders can take some relief home now that they are tied for 4th with 5 points total.

Because I didn't get around to the pre-game stuff, I'll go a little more in depth with the post-game review.

First up, I have to talk about where the inspiration came from for today's win. Mauro Rosales is the missing piece we've all been waiting for.

#SeattlesTevez got the start, presumably over Alvaro Fernandez, as Seattle's attack was also without without main goalscoring threat Fredy Montero due to injury. If you had said an attack consisting of O'Brian White, Steve Zakuani, and Rosales was intimidating, let alone entertaining, it would've seemed silly and a bit optimistic. However, from the very start of the game, the Sounders put on a clinic on how to play smart and attractive football. With Rosales anchoring the attack right where the CAM should be, the Sounders were playing the ball from flank-to-flank and from end-to-end freely and at will. Often times you would see Rosales in his own half on the left flank, helping out Leo Gonzales shutting down the Chicago Fire on defense, and then magically reappear to play a give and go on the right side with O'Brian White.

The best players are the ones you don't even see moving across the field, they are just there. Whether it's timing, or ability to read the game, or just pure hustle, Rosales was that guy who was a part of every single play. I'm more inclined to believe it's his experience that allows him to do this. Because when he was subbed off in the second half for Nate Jaqua, the team became sloppy and uncoordinated, and lost the backbone and shape that they were using so well in the first half.

Another positive that Mauro brings to the field is in his delivery. He had one assist for the day, but more importantly, the Sounders had some actual service from the set-pieces and corners. After the loss of Nathan Sturgis from last year, we've lacked a person who can deliver a killer ball, whether from free kicks or from corners. If Mauro wasn't ordered by Sigi to be taking the dead balls, then he was volunteering himself. In any case, I think we have a good thing with Mauro likely to be taking our dead balls from now on.

Another main reason for the win today was our resident Mister Miyagi in the sticks, Kasey Keller who came up big with some monster saves.

Seriously, why do people care if he is old? True masters actually get better with age. Look at Obi-wan, and Jackie Chan. Judging by the fact that Keller had three saves against the Fire that could be contending for Save of the Season, I'm convinced we have a true kungfu/karate/ninja/jedi master in our team. He reads peoples minds.

Anyways, the opposing Chicago Fire team were hardly the best they could be. Diego Chaves did well to capitalize on the lax Seattle defense when he grabbed Chicago's only goal. But other than that, Chicago's team was not too threatening. That being said, I have plenty of good things to say about rookie Jalil Anibaba. After watching his interview, I can tell he's a bright kid and he's got some potential, besides the fact that he is already Chicago's starting right back.

However, Jalil learned a valuable lesson today. Even though he plays for a team called the Fire, he now knows what happens when you play with fire. Specifically, Steve Zakuani, the Akron Zip two years his elder.

You get burned. Sorry kid, but welcome to MLS.

I'll be back later once I find videos of the goals.