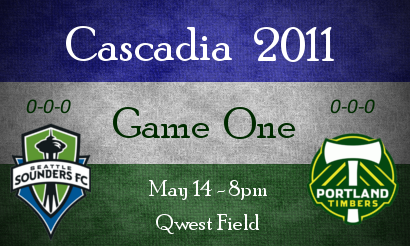 UPDATE: We've finally gotten ourselves together and have submitted the podcast to iTunes. Hopefully, the feed will start showing up there in the next 24 hours. Please subscribe and review it. Thanks. Here's the RSS if you'd prefer that. We're also now on Twitter.

It's almost here, the game Sounders and Timbers fans have been waiting for since the league's announcement that Portland would be getting a team. It's Sounders vs. Timbers everyone! Tomorrow! Kind of hard to believe, no?

We'll talk a whole lot about the Timbers, including a nice long chat with Michael Orr of the Mao Football Show, a twice-weekly Portland Timbers podcast that airs line on Cascadia FM. To keep abreast of the latest in all things Timbers, you'd do worse than to follow Mao Football Show on Twitter. Jeremiah and I talk a bit about the rivalry, the away-ticket issue and the game itself, and we also take a look back at last week's games. We gush about Servando Carrasco just a wee bit.

Hope you enjoy it!

The music you hear at the beginning and end of this podcast is used under an Attribution Non-Commercial ShareAlike 3.0 United States (CC-BY-NC-SA 3.0) License. Music provided by FreeMusicArchive.Org