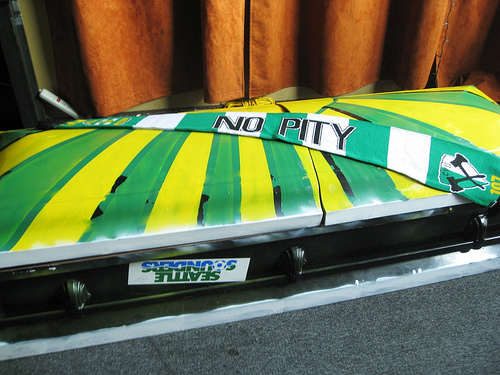 You remember when you were in 4th grade just minding your own business, trying to be bright and smart? And there was that one bone-headed bully, who was a little too small to picking the fights he does and runs his mouth a little too much thinking he's better than you in every way.

He constantly rags on you, steals your homework and copies your notes, but every time it happens the teacher is looking away and no one sees it, and you're always left wondering if there is any sense of justice in the world.

And then one day, outside on the playground at recess, the bully does something to push you over the top, like give you a wet-willy from behind while you're playing truth or dare with the cute girl in class underneath the slide. You get up, turn around, but before you even look up to see that smug, mocking grin, you just know. Shits about to go down.

Who: The Portland Timbers
What: The Rebirth, the Second Coming, the I-5 Rivalry, the Great Northwest Derby, the Cascadia Cup
Where: Qwest Field
When: Kickoff at 8PM May 14th, 2011, ESPN 2 and 97.3 KIRO
Why: Because it's on. Like Donkey Kong.

The mixed feeling of adrenaline, confidence, and impending doom is kind of like the feeling that I've been harboring for the past week. Not that Portland or the Timbers have ever done anything to harm me, per se, but I'm pretty sure the hatred between the clubs is mutual. I've said it before, Vancouver is a great place, and I admire the Whitecaps for the club's history, academy, etc. But Portland. Portland... 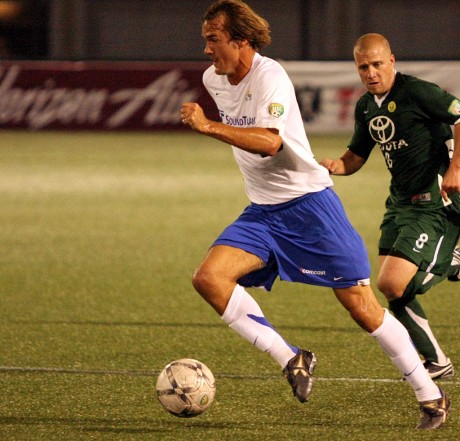 Roger Levesque knows the feeling. He is for all intents and purposes, Mr. Seattle. The Portland Killer. The one thing that all Portland fans have in common. Pure, unfiltered hatred. And for good reason. 10 goals in 12 some games against them dating back to 2003. The story goes that he once put on a Timbers shirt for a friendly game, and the Timbers Army booed him.

Let's get down to business then shall we? The Timbers have had a tough time on the road so far in their inaugural season. They are 0-3-1 on the road, but they have vastly improved since they began the season with a four game road trip. However despite their massive improvement since the start of the season, I don't think at this point in their MLS life that they've played in a stadium like Qwest Field.

Which for me means that records go out the window. Games like these are huge, and the crowds and intensity play into the result much more than a normal season game. No doubt, the level of tomorrow's game might be something altogether new for MLS, again raising the bar for American soccer. I could go on, but you already know what to expect.

In terms of on the field, the Sounders will be boosted with the confirmation of Brad Evans coming back in. Steve Zakuani and O'Brian White were released from the hospital today, where they've both been out for injuries for the past two weeks. Sigi has mentioned that they are questionable and could even feature for the game, but I think it's unlikely and probably not even for the best. Mauro Rosales will also be a game time decision, but he made progress in today's training.

I went to Starfire to watch Portland at the Cascadia Cup, and one of the things that surprised about Portland's team is that their offense is sound (heh). In that, Kenny Cooper single-handedly willed Portland to win, both with individual efforts and with excellent team play. Early on in the season, Kenny Cooper was the default leader by experience, but since March the team has grown and gelled together. One of the few surprises on the attack has been Jorge Perlaza, and Cooper's attack force has been boosted by the addition of midfielder DP Diego Chara.

Which brings up the other point. The rest of the Timbers have matured fairly quickly with the steep learning curve of MLS. Jack Jewsbury has adapted well to anchor the Portland midfield. S@<3 compares him to a poor mans Brad Davis. I am predicting Erik Friberg to sit a little bit ahead of him, so it will be up to Osvaldo Alonso to shut down his distribution.

One thing I would like to see is for the Sounders to have a defensive leader step up. One problem we've had lately is exposure on counter-attacks, and you can expect that to be 99.99% of Portland's game plan. To effectively stop the counter-attack, the defense will have to be organized and efficient. Leonardo Gonzalez is usually the most vocal in the back, so I would like him to step up and offer some direction against a very opportunistic Portland side. 100% focus will be needed to prevent Portland from grabbing an early lead and getting ahead.

I'll be at the game tomorrow on press pass, so hopefully I will have some memorable pictures. If you comment with your section and seat number before the game tomorrow, I'll try and get a good shot of the crowd around you.