Share All sharing options for: Nos Audietis, The Sounder At Heart Podcast: Episode 7 - Talking Tifo With Rob Scott Of ECS 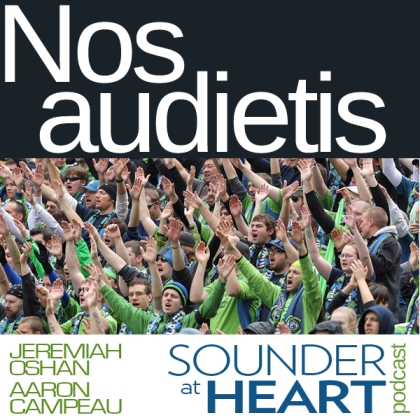 As you might be aware, we had a game last weekend. We spending a good bit of time talking Sounders-Timbers, and we'll also talk tifo with Rob Scott, tifo director of Emerald City Supporters. Rob talks about the process that goes into creating something like we saw last Saturday and he also addresses some of the rumors floating around about the display's creation. Rob's a cool guy that was great to talk to, and if you've ever wondered about the decision making and creative processes behind tifo, this is a conversation you'll want to check out. This podcast was recorded almost immediately after John Spencer's comments about Sigi Schmid and the news about the Sounders-Union game being moved to accommodate Philadelphia playing a friendly with Real Madrid, so we talk a bit about both of those issues as well.

There's another game this weekend, and Jeremiah spoke to Andy Edwards of the Daily Wiz, SB Nation's Sporting Kansas City blog. He and Jeremiah tried something a bit different in interviewing each other for use on both of our podcasts, but we think it turned out quite well. Andy is knowledgeable and frank about Sporting KC and if you've been wondering what's going on with a team a lot of people expected to be pushing for a fairly high playoff spot, this is a great place to start. There's a lot to talk about this week so we've got another hefty one for you, but we think it's well worth your time. Hope you agree!

Also, do us a huge favor, click on the logo and review us on iTunes.

Music: "Lazy" - Gosprom ("Lazy" Single) The music you hear at the beginning and end of this podcast is used under an Attribution Non-Commercial ShareAlike 3.0 United States (CC-BY-NC-SA 3.0) License. Music provided by FreeMusicArchive.Org