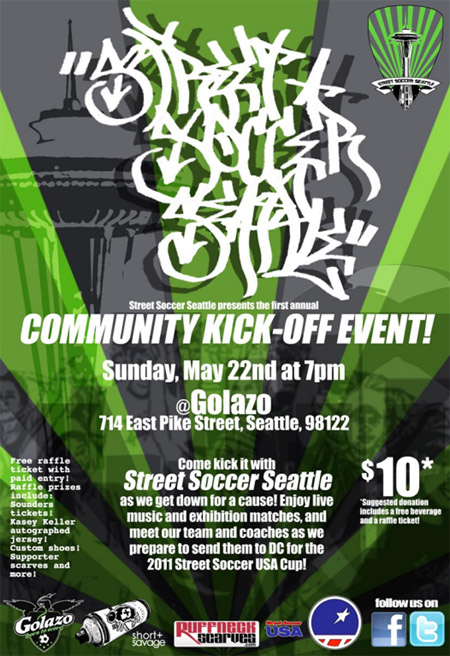 This Sunday, Street Soccer Seattle will be hosting a kick-off party for people to join the new supporters club for the team, Empowerment FC.

If you guys remember the article I did a while back, you'll know that this is for an insanely good cause. Not only will this be an opportunity to support the Street Soccer team as they fund-raise to compete in the national tournament in June, but it will be a genuinely good time.

For the event, they have partnered with everyone's favorite energy drink, Golazo Energy (way better than Red Bull), and the event will be at Golazo's new headquarters inside the old BMW dealership in Capital Hill.

There will be tons of fun going around,

They will also be selling memberships for the new supporters group. $50 for new members, $40 for students. Members get benefits and a supporters scarf, in addition to an infinite supply of good karma.

And just as a reminder of how powerful your involvement and support with Street Soccer Seattle really is, here's a small fact. Over 75% of the players that participate with Street Soccer for a year have moved on to housing and full employment.

Let that marinate, and then get all your friends out to the party this weekend.

A facebook page for the event is right here.