Autopsy of a Goal

Share All sharing options for: Autopsy of a Goal

Brek Shea's game-winning goal looked simple and straight forward, even graceful and easy, but it had a lot more to do with the bumbling tactical and positional blunders of the Sounders midfield and defense that gifted the youngster with the open door.

Yes, I did this on MS Paint. Now sit up and pay attention. If your name is 'Jeff', 'Zach', 'Erik', or 'Osvaldo', then maybe even take some notes.

Lately I've been drawing a lot of charts and graphs. So I'm switching it up, and turning onto the Sounders defense (or lack thereof) to analyze just what exactly happened. It's not as simple as Friberg's missed challenge. Because of every great goal, there is a great gaping hole.

This may look complicated at first, but check it out. 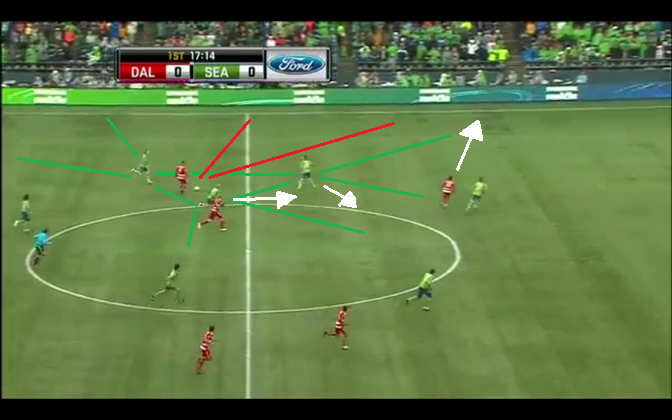 - It starts with Andrew Jacobson who picked up the ball from before the halfway line after Erik Friberg bobbled a header straight at the ground. Jacobson begins dribbling towards the left-hand side.

- For some odd reason, the entire midfield and defense is expecting an unusually quick counter-attack, so Alonso and Zach Scott start back tracking.

- Meanwhile, Fabian Castillo is being sneaky up top. The red lines represent Jacobson's passing window, so Castillo starts making moves towards it, taking Jeff Parke with him.

- The green lines effectively show the area and angles of the field that Alonso, Friberg, and Scott have shut down. When this is all beginning, they have him in a triangle, which is pretty good for starting a defensive play. Note Brek Shea moving past Alonso's back, completely covered in Alonso's angle. 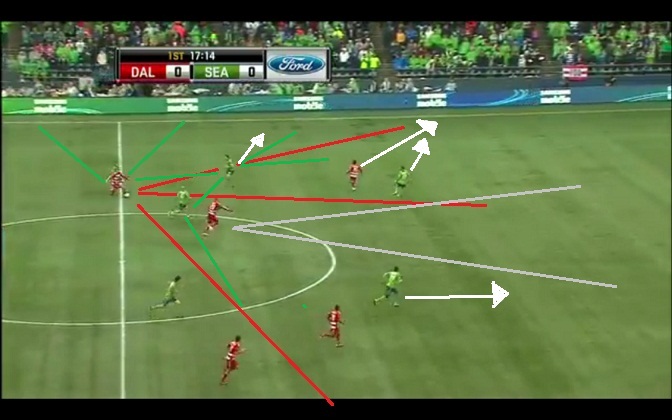 - One thing about triangles is that you don't break them. It's one of the rules of soccer, there's geometry everywhere. And for who knows what reason, Erik Friberg decided to ignore it. Instead of pressing from behind and shadowing him out towards the left-side, he comes around from the outside and pushes Jacobson towards the center of the field. Wrong move. Suddenly, Jacobson is out his little triangle of containment.

- Notice how immediately, there are three red lines coming from Jacobson and the ball. They are not exactly clear passing lanes, but they are there nonetheless.

- At this point, Alonso has stopped moving with Brek Shea (allows follow your man!), and a tiny gap appears. The grey lines represent the window of the field that Brek Shea has between him and the goal.

- Fabian Castillo is still moving out towards the left, still dragging Parke with him...

- And perhaps the biggest blunder of this all, for some reason, Zach Scott decides to backtrack towards the line. But wait! Right as he is moving to shut down the lane to Castillo, he turns! 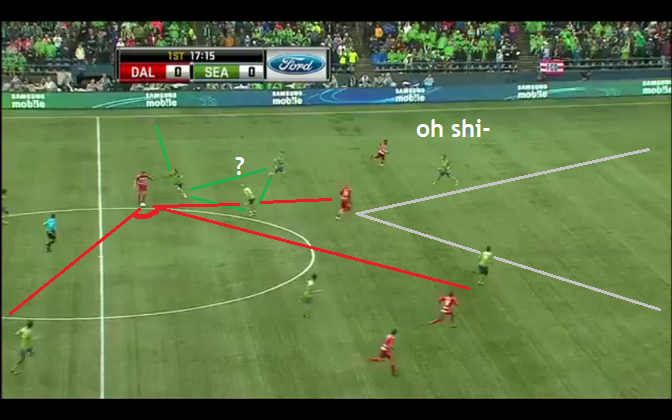 - Jacobson is now completely out the triangle and uncontained, and is now dribbling in open field. However, his passing lane is covered within a leg's reach by Friberg, who is now on the wrong side of Jacobson, and Alonso. Or so you would think.

- Those grey lines coming from Shea, showing his width of field, are growing.

- Jeff Parke realizes he's just been had, and Fabian Castillo turns to laugh at him. Parke is now in no-man's land. All by himself.

- Another gob-smacking WTF moment is had by Alonso, who literally just stops and stands there. You will notice this in the next figure... 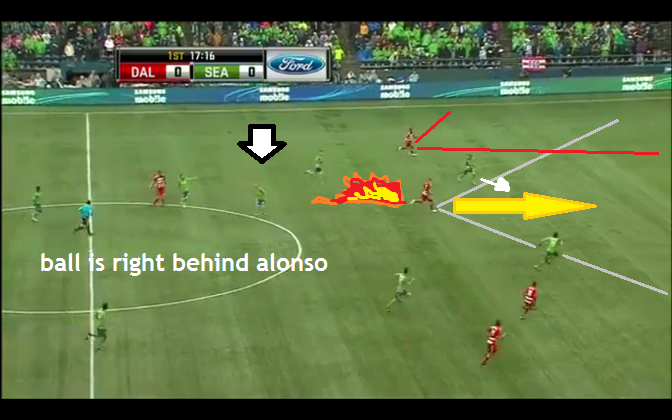 - ... that Alonso has not moved. And somehow, Jacobson threads a ball in between him and Friberg. It was a great pass, but it should not have beat Friberg AND Alonso. At this point, Alonso and Friberg are done. Out. Eliminated.

- Zach Scott, meanwhile, is now day-dreaming about how he'll spend the next couple of games on the bench.

- The red lines from Fabian Castillo indicate that he is still a playable option, but Jeff Parke has made the decision to abandon him and somehow try to get a foot in the path of Brek Shea (white arrow). To indicate the magnitude of the relative vectors, I've made Shea's arrow larger and bright yellow to indicate that he is on a complete tear. Also, those grey lines? They are still getting bigger. 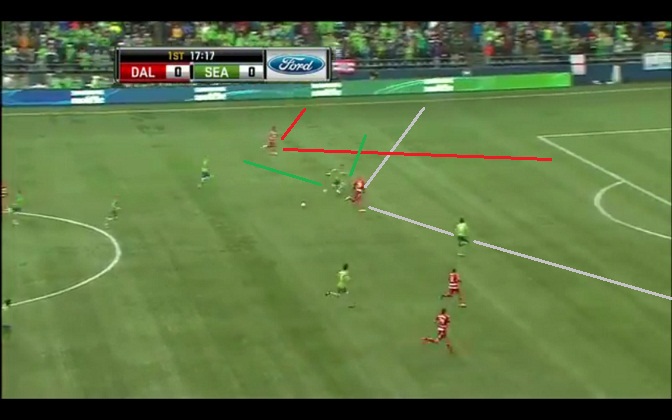 - It was hard to tell in the last picture how fast Shea was moving. Or how slow Jeff Parke is. Either way, at this point in the game, Jeff Parke is out of the picture. That's two midfielders and two defenders rendered completely useless.

- The window that Shea is running into? You could park an airplane in it, it's so massive. 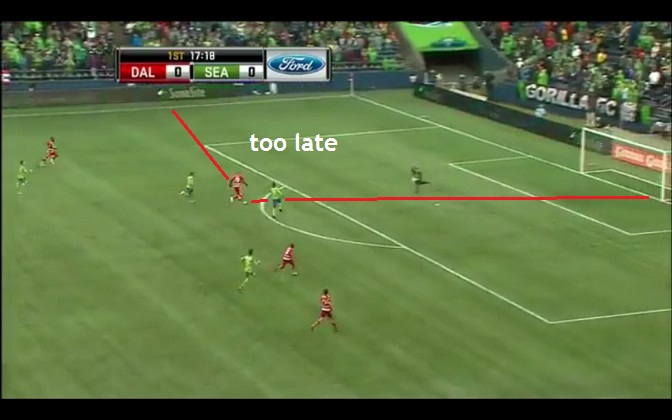 - The mindblowing thing, this is the frame in which Brek Shea finally actually touches the ball. And at this point, it was game over. Literally. Hurtado coming to make the challenge is half a second too late, and Kasey Keller is left hung out to dry by his defense.

So now that the autopsy is complete, the relevant questions to ask are what allowed this goal to happen, and why? As the pictures above plainly show, a whole lot of it has to do with the absolute positional nonsense displayed by a third of the team. I mean, really, you could trace it back all the way to the header that Friberg gave up in the attack.

Because when you look at this picture, it explains everything. This is where everything began to go wrong. 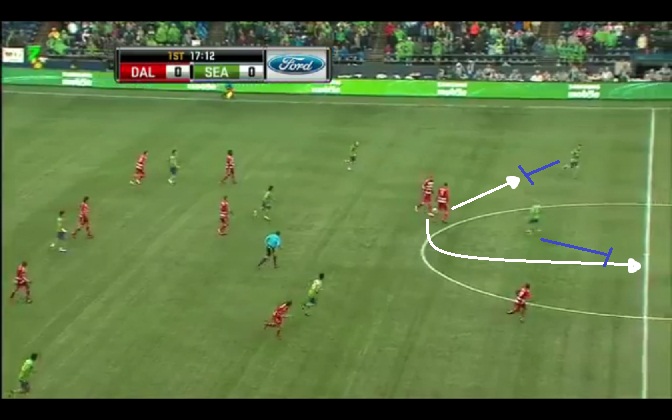 When Jacobson picked up the ball, he was awkwardly standing next to Brek Shea, who was expecting the carry the ball. For this split second, the Sounders stopped watching the ball, and started falling back into positions. Who knows, maybe it was out of habit, trained and ingrained by Sigi to always maintain a structure of formation.

Either way, when there's two players on the ball, you follow the ball. And Zach Scott made the biggest mistake by not watching where the ball was. As you can see by the white arrow, thats where Jacobson eventually went with the ball. Had Scott taken two steps towards him instead of towards his own goal, it would have given Friberg time to help out.

And this is what roasts my nuts. This picture also shows from where Shea made his run. From his own half, he ran completely unopposed. And again, all Alonso had to do was follow Shea's run, maybe poke him in the belly, but instead, he was too busy being caught in the center circle, trying to find his ideal 'DM slot' to be ready for the next play. 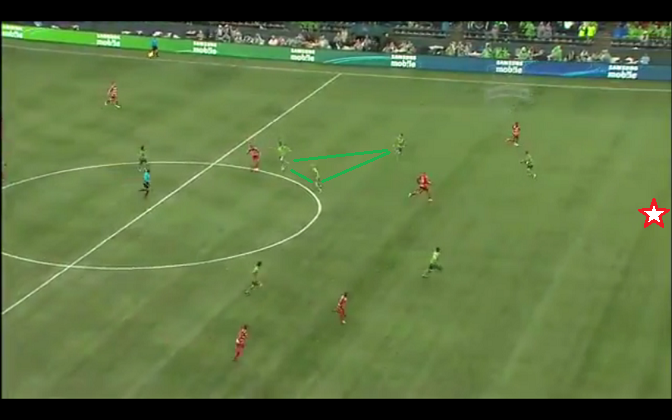 But it wasn't just those two. It was the whole defense. This picture is a different angle of the exact moment Jacobson released the ball, and where Shea was when he made the pass. Nevermind offsides, because Hurtado and Parke were sitting lax on their butts way too far back to hold them off, because the star shows the spot where Shea eventually touches the ball. And scores from.

The point of this post is that this goal sucked, and could have been prevented on so many levels. But no one on this particular play decided to pick up their boots and keep their brains on. Stated simply, it was just a defensive lapse which ultimately cost the team more than just three points.