There were a lot of things working against the Seattle Sounders on Saturday. Before the match even started, there was Real Salt Lake's roughly 350-minute shutout streak and their 29-match home unbeaten run. Shortly after starting, the Sounders lost Alvaro Fernandez to a muscle strain. The weather, once again, turned bad. All things considered, most of us would have been very happy with a point.

Looking at the numbers, that probably would have been a fair result. The Sounders had a slight shot advantage. RSL had a possession and passing advantage. Both teams had several quality scoring chances. And much of those numbers were generated before Jamison Olave's red card.

It would be dishonest to act as though the red card did not influence this match. Our point expectancy shot, though, illustrates that a tie was still the most likely outcome. Let's also not discount what the Sounders did in winning this match. Sure, they were facing an offensively depleted opponent, but RSL's defense was at full strength and they are deep enough to still be considered very good by MLS standards.

The highlights show that RSL still managed to create pressure and probably deserved at least one more goal, but that the Sounders could have score one or two more themselves. It was a fair result. Enjoy it. More quotes over at the Seattle Times. 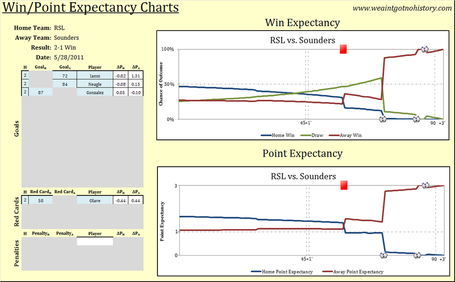 On getting the full three points:

"We came in here last time and gave up a goal at the end, and we came close to doing that again. Being able to hold on was good, but we didn't make it easy on ourselves."

On the play of goalkeeper Kasey Keller:

"[Kasey Keller] came up huge because they were throwing everything forward and with the rain it was a little bit slippery. They were definitely putting balls in the box and putting pressure on us. We didn't do a good job pushing out sometimes, but Kasey did well."

On the first road win at Rio Tinto Stadium for any squad since May 2009:

"It is something we're proud of and something we talked about before the game. We wanted to try and be the team that ended the streak, and it was something that was a goal for us as we went into the game."

"You always remember your first goal. It's defiantly nice. I've had a couple of goals in the Reserve League, but nothing like that."

On being able to hold on late:

"We always want to go up a couple goals and have that insurance. We've had a couple leads and lost a couple leads so we definitely knew we needed to keep going at it and not just pack it in. I got my chance and I took it."

On getting the tough result:

"(The win) ended their streak and hopefully we are at the start of our own streak right now."

On hanging on for the full three points:

"We did everything we could to try and throw it away, but we didn't, so it was great. A lot of credit, it was nasty conditions. RSL is a very good team and they put us under an extreme amount of pressure in the last 10 minutes."

On bouncing back from Wednesday's loss against FC Dallas:

"We were obviously disappointed after the loss the other day at home, so this is a good way to put that out of our minds. (Rio Tinto Stadium) is a tough place, and they hadn't lost at home in 29 games so it's obviously a very difficult place to play. We're proud to be the ones to break that streak."

On RSL's relentless finish to the match:

"Real Salt Lake never quits, and that's a lot of credit to them. They kept coming and they got their goal and almost snuck another one at the end. Like I said, I'm proud of our guys to hold on and keep those three points in difficult conditions."

Overall thoughts on the game:

"I was real pleased with the way we fought and our aggressive mindset to open up the second half, the way we continued to fight when we were down a man and down two goals.  All in all, it's one of those times as a coach that I'm happy with the fight and the spirit and very disappointed with the result."

On the end of RSL's 29-match home undefeated streak:

"All good things must come to an end, I guess.  I'm not quite sure how to feel about it right now, I've been so focused on all of the small things going on with our team lately.  In some strange way I'm pleased with a lot of the play, with the fight of the guys, with the mindset to keep going and never quit."

On the late goal from Nelson González:

"When Nelson [González] comes in to the game like that, down a man, as bright as he was and scores a goal - it will be hard to leave him off the lineup next week."

"[Jamison] Olave has been doing a much improved job in the disciplinary column for the past year and half now. Last year I thought he had a real strong year, this year he's been spot on.  A different referee tonight and that's a yellow card."

On how the game went after the red card to Jamison Olave:

On the positive things that Real Salt Lake can take out of the match:

"The positive is that we did come back and we showed fight. We showed that we are not a team that gives up and that's always how we've been, that's how we are going to continue to be the rest of the season."

On the red card shown to Jamison Olave:

"I don't really know what to think about it. It doesn't look like (Mike Fucito) necessarily has the ball under control yet and [Nat] Borchers was pretty close, enough to make a play or at least try to hold him."

On whether this is a low point for Real Salt Lake this season:

"For sure; it kind of feels like we can't get a bounce to go our way. We keep saying and trying to do the right things and the guys are putting the work in. The effort is good, but it's obviously got to get better at this point."