First-ever loss at DC United. Some head-scratching substitutions. The end of a six-match unbeaten streak. There are obviously reasons for people to fret over the Seattle Sounders' 2-1 loss on Wednesday. But frankly, I'm just not seeing it, especially after going over the quotes, highlights and statistics.

Sure, I felt like we should expect at least a point in that game, but I also felt we played well enough to get it. Sure, I was frustrated by some of the subs, but looking at the post-game quotes, I'm inclined to think Sigi's hands were tied. It was an excrutiating loss in many ways, but it's not one that has drastically changed my opinion of this team.

Mainly, I'm encouraged by the knowledge that one goal was waved off, in my opinion, unfairly. We also had several other very good chances on which United goalkeeper Bill Hamid simply made very good plays.

Defensively, I'll admit to having some more concerns, as both goals were eerily similar and were potentially indicative of systematic breakdowns. As Dave pointed out to me, there's a pretty good argument to be made that the lack of midfield width was at least partially to blame as the fullbacks are being expected to push farther up the field and exposing themselves to counter-strikes more than normal.

Unfortunately, I'm not sure what can be done about that as Sigi's post-game quotes reveal that Mauro Rosales, the team's only true wide midfielder, suffered a hamstring injury that basically rendered him useless for the final 10-plus minutes. Although I am still scratching my head over Leo Gonzalez being brought in instead of Mike Fucito, or some other attacking play, since Rosales' injury appears to have happened after Gonzalez came in.

All Statistics contained in this boxscore are unofficial 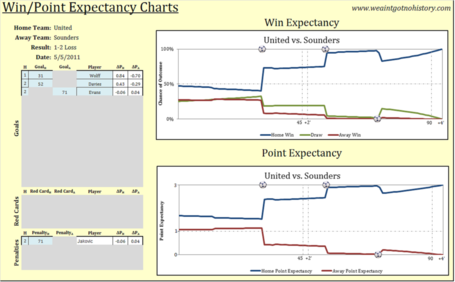 I think we played a team that was extremely motivated. [D.C. United] came out with a lot of energy and we didnt possess the ball well enough at times to take some of that steam out of the game in the first half. We were a little bit careless with the ball and the goals we took were identical. But then in the second half we got back into the game and I really thought at 2-1 we would get the equalizer. Then Mauro Rosales pulls his hamstring so the last twelve minutes he came in he's just standing on the field and can't move anymore. So now we're playing ten against eleven and then they were obviously able to hold onto the ball. If we played eleven against eleven it would have been better at the end, so we're not happy but we've got to move on and get ready for Columbus.

On his side's offensive rhythm:

We were able to get some pressure in the box, but it wasn't cohesive enough and sometimes I think we ran too much. Brad Evans always gives you a good effort and Erik Friberg gives you a big effort, but sometimes I think they ran too much ahead of the play instead of coming in behind the play. So as a result of that, we had too many guys close together and when the ball popped free it seemed like every second ball fell to [D.C.] because we were on top of each other.

We just gave  [D.C.] two easy chances and they finished them both. [The goals] were in a couple good places and they kind of reversed it. I think at the end of the game we were pushing hard, got the goal, had good chances, and unfortunately after we used our three subs we had somebody go down with an injury which kind of took the steam out of our push. We had some good chances at the end to tie the thing up, but it wasn't meant to be. [It's] frustrating because I thought we'd been playing better than we played today and that was a shame. In the end, give D.C. some credit. [They had] good movement up front with Charlie [Davies] and Josh [Wolff] and that made the difference.

On the run of play:

We were stop-and-start the whole game. We just couldn't passing wasn't right, movement wasn't right just compared to how we played the other day against Toronto it just wasn't there and it was frustrating. But in saying that we created enough chances at the end of the game to maybe get something, so you're not going to play great every time you step on the field. Good teams find ways to get results and today unfortunately D.C. found a way to keep a result.

I think we started out a little bit too flat and we knew [D.C. United] was a team with their back against the wall. For us, we didn't play as well as we did last week, especially as far as moving the ball and keeping the ball in possession in our attacking half of the field. We still created a number of chances and it was just a matter of putting them away. We get one back and keep pushing, switching to the 3-5-2 [and got] maybe two or three good looks after that. The headers were on frame [Bill] Hamid made some good saves on different shots and different headers, but we just couldn't pull out the tying goal.

Credit to [D.C. United], it seemed like they were kind of swarming in the midfield and really putting pressure [on us]. For us, the ball was going forward and it was just sent right back down [the field]. The way they played they kind of dropped back to a four-star center midfield, so we pushed a little bit too high and when the ball turned over Dax [McCarty] was free to go. If you give a number ten that much time and space, they're going to pick you apart and two good runs by their forwards and they finished their chances.