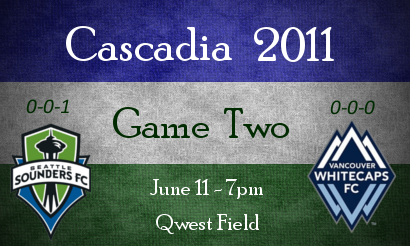 Generally when a team fires a coach midseason, they will schedule it before a series of easier opponents. This gives the new coach a chance to start off his tenure with some good results, and from a PR perspective it makes it easier to convince the fans that the change was for the better based on those results. But when the Whitecaps parted with coach Teitur Thordarson in late May, the upcoming schedule looked like: away at Chivas USA, away at Real Salt Lake, away at Seattle Sounders, home versus Philadelphia Union. That would be a difficult stretch for any club, and the Tommy Soehn era hasn't started off triumphantly.

Of the changes Soehn made to the team, most were telegraphed. He dropped some players that had come up with the Whitecaps and to whom Thordarson had remained loyal and replaced them with offseason acquisitions. So out went Jay Nolly and in came MLS veteran Joe Cannon. Out went Wes Knight and in came Superdraft pick Bilal Duckett. Davide Chiumiento was moved from the wing into a withdrawn forward position where he could distribute to both sides of the field and Camilo moved to the right wing where he could use his pace to run the flank. All told, they were decisions that made sense. It created a formation that should be familiar to Sounders fans. Camilo and Russell Teibert provide dangerous pace and crossing ability on the wings, supported in the middle by a target man in Eric Hassli and a withdrawn playmaking forward in Chiumiento.

The only step that would complete the transformation into a Sounders offense would be the addition of a holding midfielder to clog up the middle. So naturally the Caps went out and got Pete Vagenas. Pete got a lot of stick in Seattle for slowing down the counterattack and he earned the nickname 'Passback Pete' for his strong preference for laying the ball back to the defenders or Osvaldo Alonso rather than playing it forward. But for a Whitecaps team that's struggled to maintain possession all season, his calm passing on the ball may be just what the doctor ordered. It will slow down the Vancouver attack through the middle, as it did with Seattle, but it might allow them to hold onto the ball long enough to create an attack on the flanks.

For Seattle, this game marks the end of Cascadia Cup competition at home. When the season schedule came out most of us were happy to see that the first two games of Cascadia competition were going to be at Qwest. We'd be able to enjoy the atmosphere of the rivalry before anyone else and our supporters groups would set the bar for Portland and Vancouver, which they unquestionably did for the Timbers match. Now that it's nearly over, we'll have to deal with the other consequence of that early schedule, which is that the Cup will now be decided elsewhere. But it should be an advantage to the Sounders to know what away results they'll need to win the Cup, and MLS may see for the first time ever a team pushing for an away win during the regular season to secure a supporters' Cup rather than a league result.

The Sounders' lineup is — as it has been all season — unpredictable. The litany of injuries seems to have mostly subsided as we've settled into being without O'Brian White and Steve Zakuani and the nagging minor injuries to Brad Evans, Nate Jaqua, Mauro Rosales, and Mike Fucito have apparently been dealt with. The exception is Alvaro Fernandez, who's still questionable with the hamstring problem he suffered in Real Salt Lake. But injury questions have been overtaken by selection issues up top.

Between Fredy Montero, Fucito, Rosales, Lamar Neagle, Roger Levesque, Brad Evans, and Nate Jaqua the Sounders have a number of options that could play anywhere up top or on the wing. Based on pure ability, Montero should be a lock for a starting position, but whether to send a message or to shake up the tactics, Sigi has opted to start the Colombian on the bench the past two games. Jaqua would also normally be penciled in when healthy, but his production has been off all year and he's nowhere near the level he was in 2009 when he paired so well with Montero. Sigi loves the big/small pairing up top so it's hard to see him starting on the bench unless Levesque starts in the target man role, which is less likely.

Neagle has played well on the left wing in lieu of Fernandez and had a wonder goal in Real Salt Lake, but didn't produce much in Chicago. Fucito is capable of playing left wing as well if he's not replacing Montero at forward. Rosales has done very well on the right wing when healthy, but last week Sigi started Evans on the wing and played Rosales in a CAM role. The fact that the team didn't generate any goals against a poor Chicago defense suggests that the experimentation will be ongoing. And this doesn't even broach the rotation at center defense or the Tyson Wahl/Leo Gonzalez question at left back. The only positions that are absolute locks on this team due to ability and lack of competition are Kasey Keller in goal, Alonso at defensive midfield, and James Riley at right back. Which is frankly a little strange for a team that wants to be a Supporters Shield contender.