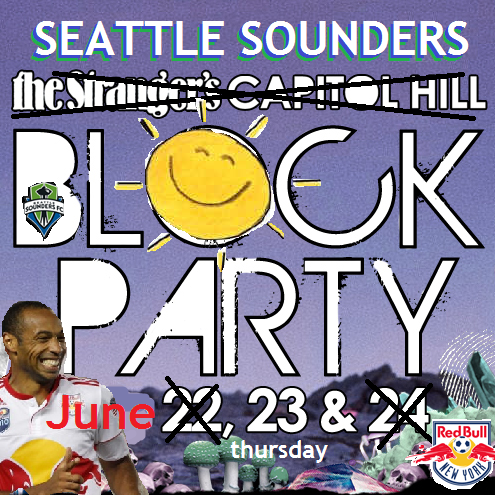 It's officially summer. So why not celebrate the best moment of the year! The special moment when the NBA and NHL have just finished, the start of the NFL isn't until a couple months (or in this year's case, a bit longer), and there's nothing on TV but soccer, soccer, and soccer.

Yup, if you've been anything like me, you've just recently graduated college with no job and are sitting on mom and dad's couch watching Gold Cup, Euro qualifiers, and everything MLS. Not going to lie, after taking a break away from the blog in my hectic final weeks, it's kind of good to take a moment to relax, and more importantly, catch up with all the soccer action. Just please don't tell my mom.

So first off, let me set the mood.

Though it doesn't feel like it quite yet, it's summer, judging by the sunglasses that the Fremont Troll was found wearing after this weekend's Solstice parade. So to help bring it in, the Sounders are hosting their first ever Summer Block Party.

Seattleite's and Sounders fans are no strangers to block parties, and this one is looking to be awesome. There's going to be:

If that's not awesome enough, the team will be bringing out both of the 2009 and 2010 Lamar Hunt U.S. Open Cup trophies to the beer garden for picture taking. That's pretty awesome.

And no block party would be complete without food. The first 1000 fans to show up will be getting free Hawaiian pork sliders. That sounds pretty good, but what's even better is that the Sounders hinted at free Johnsonville sausage samples. Could it be? The return of the Giant Grill Truck? Forget Henry, I want the Grill Truck at Qwest Field!

Oh, speaking of which. This Thursday's ESPN national broadcast will be the first game inside the newly renamed Century Link Stadium. Some are already affectionately calling it the 'CLink', as in a miserable place for undue visitors serving time and receiving punishment. I can't really come up with anything clever (Centaur Stadium?), but hey whatever, Qwest Field, Century Link, Royal Brougham Park, XBox Pitch. Whatever it's called, it's going to be a fun time on Thursday for sure.