How MLS attendance stacks with Brazil and the World

Share All sharing options for: How MLS attendance stacks with Brazil and the World

In case you haven't already seen the many times regurgitated article, an interesting bit of fan claims and journalistic research produced an intriguing comparison.

The Seattle Sounders and the CLink (not sure if I'm used to it yet) are averaging higher attendance numbers than any club in Brazil. And not just that, but attendance numbers throughout the league in MLS aren't as bad as we all thought they are. Heck, even FC Dallas does better than Santos, the legendary club that birthed Pele, and his mohawked teen successor Neymar. Hard to believe? 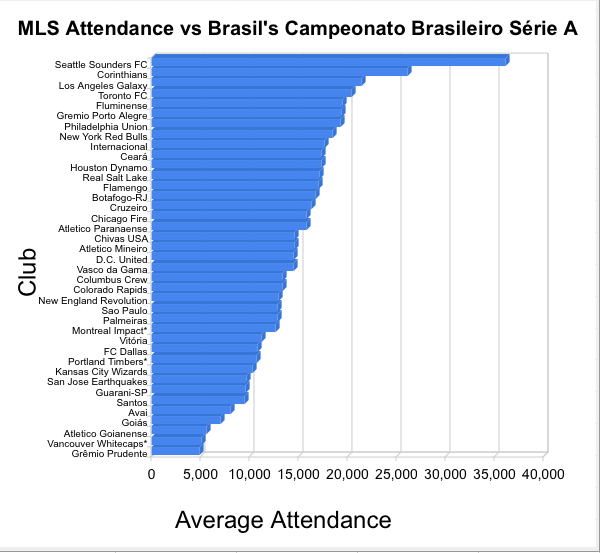 This graph came from the original article from MLSRumors (fitting, I know) who wanted to prove to a fan that MLS average attendances aren't that bad. The issue was even again brought up on the BBC's World Football Phone-In, where they discussed Orlando City SC's incredible success story (8000 fans for a 3rd division side!).

Recent rumors from the office say that for Thursday's match against Red Bull, the Sounders are expecting 45,000 fans as the stadium will be fully opened, which is considerably more than the average of 36,297 of this season (as reported by SAH). To put that in perspective, that puts the Sounders at #23 for highest attendance for soccer in Europe, above the likes of Chelsea, Liverpool, Atletico Madrid, Fenerbahce, Stuttgart, Roma, Porto, and many more.

Even crazier though is to compare the rest of the league with other international leagues. Here are some more figures from MLSRumors. 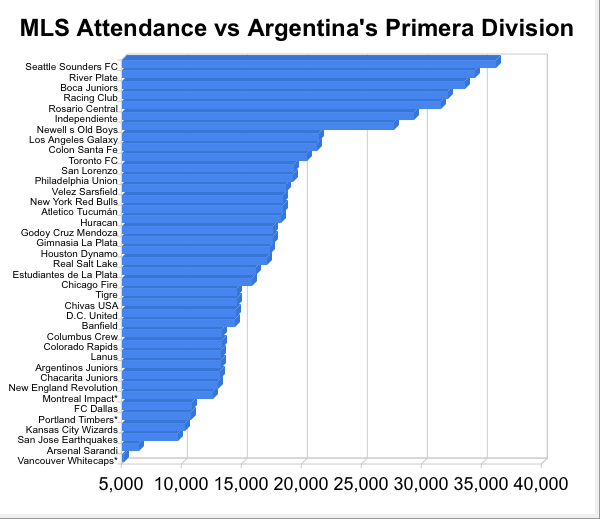 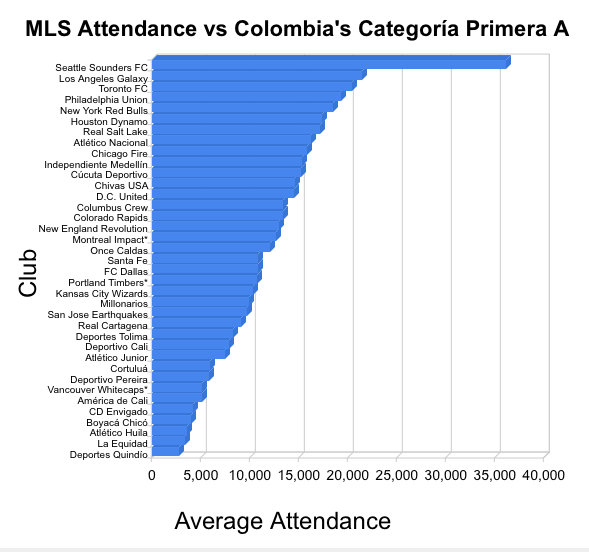 And a really cool comparison of EPL teams with MLS teams found here.

One thing to consider is that especially with Brazil, there are certain barriers that might make it more difficult for fans to make it to the stadiums for matches. I got curious thinking about this, and was wondering what the relative cost is for a Brazilian to attend a match, and a Sounders fan to attend a MLS match.

This website lists the ticket prices to go see Corinthians play against Sao Paulo, in what would be a very promising match with high demand (the equivalent of Seattle vs. Portland). I think I'm correct in saying a ticket to the 'tobogan' section (?) costs 30 Brazilizan reals, which translates to a little less than $19 US dollars. Assuming the average ticket price for nosebleeds for the Sounders is about $25, with ticketmaster fees included, I wanted to then compare them to the average GDP per capita of a resident in Sao Paulo and a resident in Washington State.

So it's roughly 0.614 times more expensive for someone in Brazil to actually attend a soccer game, in relative terms. It's obvious that the GDP per capita probably isn't the most accurate measure of consumer spending in Brazil. This is because there are still many other issues like safety, employment, and the fact that everyone in Brazil who isn't physically at the match is probably glued to it on a TV screen. Which likely isn't the case with the Sounders and your next door neighbors.

Most people seem to think that Americans just don't appreciate soccer like the rest of the world does, and that Brazil of all countries is the one that loves the sport the most with true appreciation and passion. However the graphs from MLSRumors seem to suggest that Americans are actually on par with Brazilians when it comes to going to games, and that the logical conclusion would be that Americans actually appreciate the game more than most folk would think.

But, when you take into account the different cost of going to the game and the obvious intuition that it might actually be harder to attend a game in South America or Europe than in America, then maybe it's not that everyone is underestimating America's love of soccer. Perhaps it's Americans who are overestimating the rest of the world's love of the game.