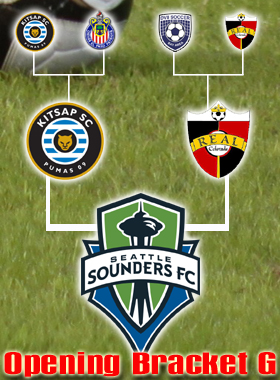 If the Sounders are the big time around here, then the Kitsap Pumas would be the underdogs. But they have a chance to create an interesting Northwest first, a truly authentic derby.

That's right, the Kitsap Pumas face off tonight at 7PM at Bremerton Memorial Stadium against the Real Colorado Foxes for the chance to face off against the Sounders in the third round of the US Open Cup.

It seems there is a rapidly growing fanbase for the Pumas, who play in the USL PDL which is essentially the 4th division. They are currently coached by Peter Fewing (the Sounders' occasional color commentary and the 'soccer camp guy'), and there is a bit of gusto to see these locals face off against the Sounders.

Of course there is the problem that if the Pumas do advance, then they would face the Sounders at Starfire two days after facing the New England Rev's. It likely won't be a problem as starters won't be playing anyways, but it will make things interesting (knock on wood).

In any case, theCup.us has a great bit of background on both the visitors and the Pumas.

Speaking of which, if you wan't to catch a glimpse of the Lamar Hunt trophies, be sure to come to come to the Sounders Block Party, where they will be on display.