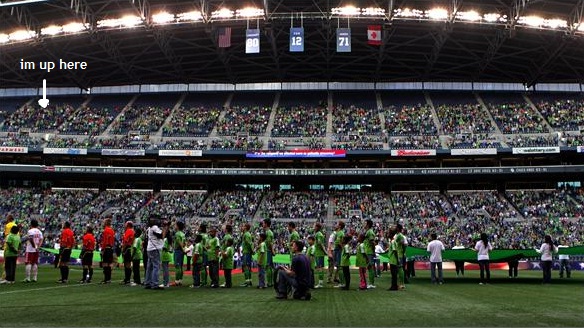 The Sounders marked their centennial, their 100th match in in MLS, just the way it all started. Goals, celebrations, and a win.

For the first time in a long time, I was able to enjoy the energy of matchday as a fan. After convincing three friends at the last minute, one of whom had never been to a Sounders game before, I was determined to have a good time. I took care of everything on my end, with the free BBQ sliders (which were delicious), and lots of prefunking (those Big Gulp cups at McCoy's are huuugggeee), the only thing I needed was an entertaining match and the chance of coming away with a win. Man, what a game that was.

More than 46,000 fans came out on a somewhat cold and cloudy Thursday, setting a Seattle MLS season record (which you already know about). The match started off well enough, with energy and intent from both sides. But almost in the same way that very first inaugural Sounders match against a miserable NYRB side, the Sounders put a point up on the scoreboard in only 10 minutes, after Erik Friberg shamed a poor defender back into his schoolyard nightmares, and ripped a beauty of a curler.

I can't remember who that poor guy was, and I can't be bothered to care. Because less than 2 minutes later, I was out of my seat again in rapturous applause. By applause, I mean drunken screaming, cheering, and near-crying.

From the same corner, the New York defense again failed to make a convincing clearance. The ball ended up being hoofed high up, and what goes up usually comes down right into the lap of Osvaldo Alonso. We all know Alonso loves that first-time volley, he's been ripping them ever since he exited the womb. Wait. OK, anyways. In recent games though, it seems he's been receiving some advice from the coaches to keep his shots down. His goal against the Whitecaps was a a great long-range effort, and if Alonso can learn to fill his shots more with precision than power, then we could have a viable goal scorer considering Alonso gets at least 10 to 20 shots off target per game.

Well, his goal against New York last night was perfect. When the ball came off the fuzzy head of Stephen Keel, Alonso had the perfect timing to just walk through his shot. It took two bounces, squirming through a crowded box, and into the back corner of the net. Truly great stuff, and should be up for MLS Goal of the Week in my book.

In the 30th minute, New York pulled one back with a brilliant Dempsey-esque style goal by Dane Richards. Perhaps he was taking cues from Dempsey after Clint iced the Jamaicans out of the Gold Cup, but it was a great goal that Keller was helpless against. Meanwhile, ECS continues singing as if nothing important happened.

They say the most dangerous thing in soccer is being up 2-0 or 2-1 at halftime, not necessarily 1-0 or even 0-0. It's because when there's two goals by halftime, you know that there are more coming, and that no lead is safe or secure. That was kind of the feeling I had sitting way up in my nosebleed upper bowl seats, but then I just continued drinking beer. Hey, what are the chances? The Sounders up until then had only scored more than 2 goals once before, so anything more than that would be good for our starting forwards.

So of course, the game is tied in the 58th minute after Jan Gunnar Solli made a racing run up the right flank and blasted a ball into the box. It took a nasty deflection off Zach Scott and into the Sounders net. With the game at 2-2, Sigi Schmid finally made a play by inserting Roger Levesque into the game for an otherwise quiet Mike Fucito.

The Pirate that is Roger Levesque showed us all again why we love him, why he is Mister Seattle, and why he is the Pain Machine. The second half Sounders looked nothing like the second half Timbers against the same NYRB defense, and I was seriously worried by a possible meltdown. Honestly, the last person I expected to take the game, flip it upside down, and wear it as a hat was Roger. After some scary open field play by the Sounders defense, the New York attack found the most room and space before Osvaldo Alonso made a breakaway shot that resulted in a corner. While everyone else in the stadium was still gasping for air, the Pain Machine waltzed up and opened a can of Whoop-Ass.

This goal is every striker's dream. I can tell you that personally. It wasn't even that the NYRB defense let Roger walk right into it, it was just extremely well taken. He started his run from nearly 20 yards away, bobbing and weaving, until finally he walked into the tiny window frame where he snuck a flick-on past Sutton. The goal required great delivery of the corner, but even better anticipation by Levesque. It was a technically fantastic goal. Superlative.

At 3-2, Timber Joey was buzzing around in my ear as De Rosario was looking for a penalty to create. But again, of all people, it was Roger to the rescue.

I don't even need to say anything about the final goal other than that celebration is the cherry on top, and Sutton's visible misery is the whipped cream and peanuts.

To be completely honest, last night was probably the most fun I've ever had at a Sounders game. Plenty of positive signs, even if the absence of Thierry Henry had something to do with it, but overall, I like a more comfortable looking team with all the pieces falling into place. So from now until October, we've got lot of work to do to close out the season and make the strongest play-off push yet. But hey, we're just getting warmed up.