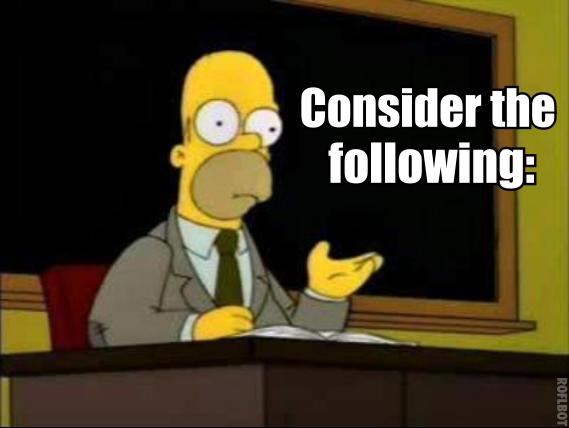 Right, so I was reading some comments and thinking about our recently found scoring touch and our equally recent leaky defense. Part of me was curious about whether this was a direct trade-off between the two, or perhaps a result of a sacrifice in tactics that Sigi has made. As I went back to rewatch the highlights of Colorado's goals, it hit me.

Vrmmvrmm vrmm. Hear that? That's me firing up my MS Paint. To the drawing board.

In the last month, three of our last four wins were come-from-behind wins, when we gave up the first goal to opposition early on. In NE, it was a Sainey Nyassi goal in the 3rd minute. Against Colorado, it was a Wells Thompson goal 50 seconds in. Against Portland, again they scored first, but it wasn't until the second half. In that Portland game, it was almost as if the match hadn't really started in the second half, so I'll let that one count (just so I can keep my theme going).

In all those games, Erik Friberg was starting alongside the middle of Ozzie Alonso or Servando Carrasco. One thing to notice is that Erik Friberg didn't get into the pattern of starting in the middle until the last month or so. Before that, Sigi tried different combinations of Brad Evans, Carrasco, and maybe even Rosales, in addition to Alonso and Friberg. Going through the new MLS Chalkboard feature which was added midway through the season, you can compare things like distribution and defensive plays.

Because I am lazy and don't want to do calculate numerical averages, I will just tell you that Erik Friberg averages considerably fewer tackles than Alonso and Carrasco. That's not surprising at all, considering Alonso is a machine and has the most tackles in the league, so it may be a little unfair to compare Friberg to the best of the best. However, judging also from his distribution and another defensive statistic called "recovery" (which I am assuming is a recovery of the ball), it is clear that Friberg's job is very different from Alonso/Carrasco/maybe even Evans. Alonso is almost the CDM-anchor of the defensive third, while Friberg is like the swinging torso that feeds into the neck, arms, and rat-tail, that is Rosales, Alvaro, and Fredy respectively. It's not that Friberg is doing his job badly, it should just be clear that his job is very different from Alonso.

The reason why I bring this up leads me to the first goal that Colorado scored. 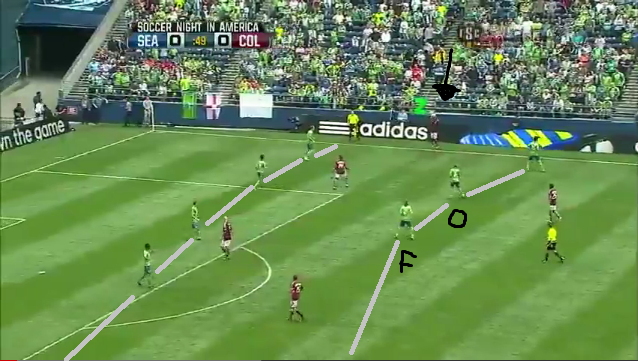 The play begins exactly at the 0:50 mark, when the Colorado throw-in is taken in on Seattle's left flank. Before the ball is actually thrown in, Seattle's visual 4-4-2 lineup is fairly visible. In case you have trouble connecting the dots, I drew the grid for you. Ozzie is labelled 'O' and Friberg is labelled 'F'. The back line does well to start the play rigid. 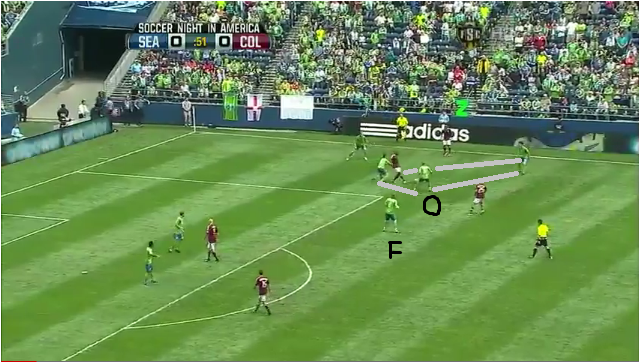 The throw-in is actually a very short ball in directly into the ground towards a burgundy shirt. Immediately, a triangle forms. Ozzie comes in from the middle and pushes out towards the sideline. This is called shadowing, and it helps put defensive pressure on the ball. As I mentioned before, triangles are good. But notice where 'F' has his feet.

This image is also the exact point that the ball is played out of the triangle and backpassed towards another burgundy shirt, Marvell Wynne. This totally makes sense, because as you can tell from the triangle, the side that has the least pressure coming in is from the furthest point away, in this case Alvaro Fernandez. So out goes the ball. 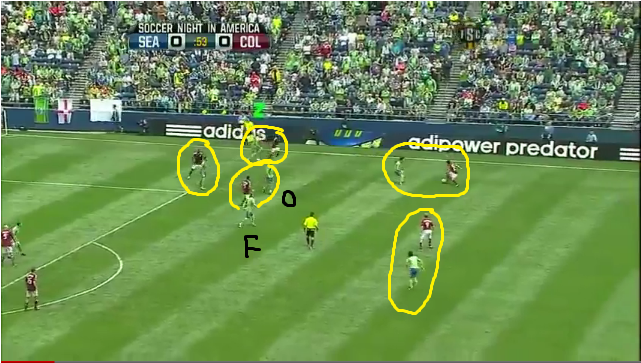 'F' has now tracked away from his goal and towards the ball, but it's kind of hard to tell that he is also moving towards the sideline. He is getting sucked in.

Also, I brightly drew five circles. Notice how all the circles include a pair of players, one green and one burgundy. Also notice how 'F' has no burgundy shirt to grab. He is lonely. So he does what any lonely person does in a lonely situation. He moves over towards the commotion, and tries to find a burgundy shirt to hug.

Whaddya know, this image is also the exact point in time that the ball leaves Wynne's feet via a cross towards the goal. Please keep your eyes on 'F'. 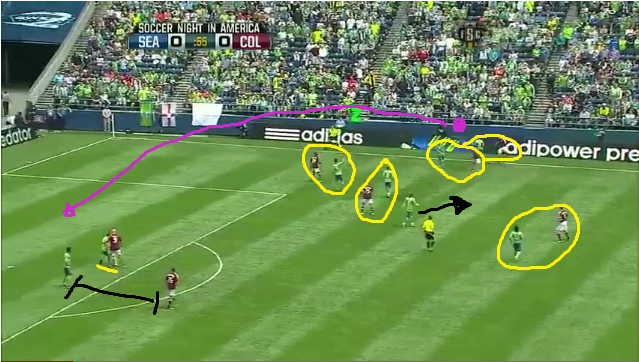 Because as the ball is flying over everyone's heads towards Conor Casey, who is Colorado's 'first' striker, 'F' is still marching towards where the ball was half a second ago. Somewhere in the purple dot is the ball, and the purple line is the path that it follows. Notice also that Friberg is still all by himself, not really helping anyone in particular, but not really hurting anyone either, so it seems.

On the bottom is James Riley, and the distance between him and Wells Thompson is marked by a black bar. That black bar is going to get bigger, as Riley follows the cross to help cover Conor Casey. 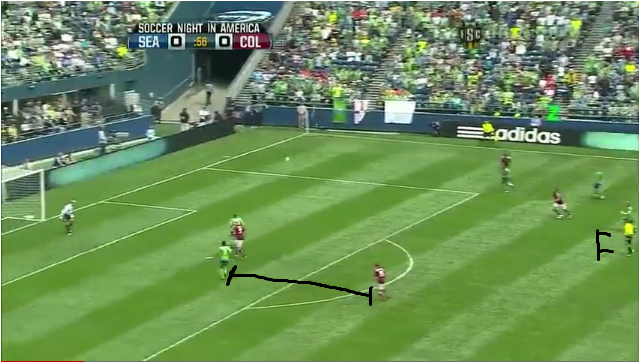 As shown in this picture. Instead of following the ball, Wells Thompson slinks behind, fulfilling his 'second' striker position. Where's 'F'? Oh, he's barely in the frame. In fact, I had to time the freeze just right because he was so far behind. Nevertheless, Friberg realizes that he is WAY out of position, and starts huffing towards the goal. 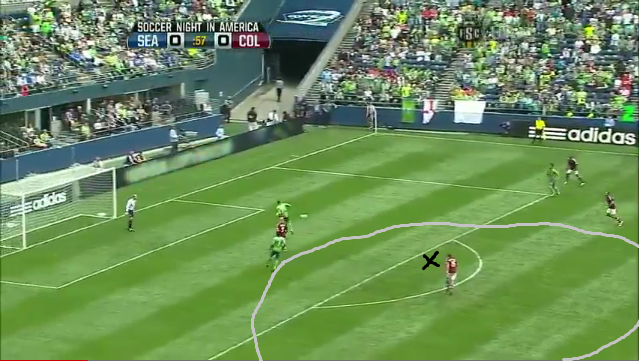 This is a depiction of the radius that Wells Thompson now owns, right when the ball is dinked off in a very poor clearance. The grey circle marks how much metaphorical space Thompson has in open field, and in relativistic Einsteinein space-time, that's almost a full second. Do you know what you can do in one full second? Play a death metal arpeggio chord on the guitar. Type "akjlsdhglkasdghlaksdjghaklsdjgasldgkjadsgsdkldsjgslkdflksjdkljfds" on the keyboard. Chug half a PBR. Scream "WATCH OUT" and dive to save to a pedestrian in a busy crosswalk in the path of an oncoming bus.

Oddly enough, you can also pull off a well-placed, well-aimed, and well-powered shot. Which is exactly what Thompson does on the little black 'X'. Three steps, and one shot. Bingo, Colorado up 1-0. But wait! Where's Friberg been this whole time! 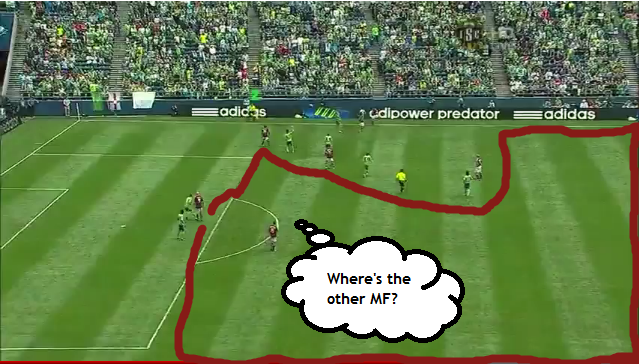 Here's a separate angle, where the burgundy outline shows the entire space belonging to Wells Thompson. Notice the slanted line at the top, because that includes Erik Friberg getting sucked over to the outside, when really he had no job being out there in the first place.

The second goal happened in almost similar fashion. The entire play began as a long ball over the midfield towards Wells Thompson. The picture below is right when Thompson receives it. Like any smart striker, he pulls back and waits. Not for teammate support, but to draw and suck in the opposing defenders. 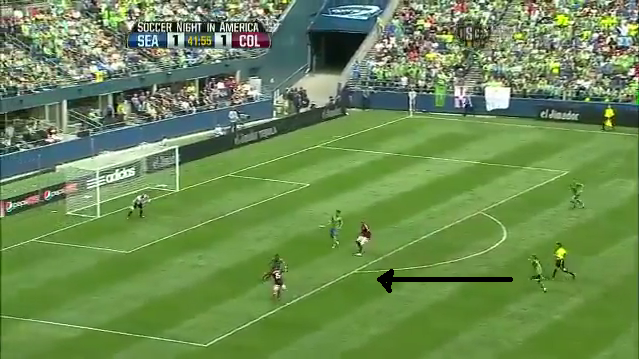 Notice the big black arrow. That's where Erik Friberg is dashing into the scene. Nothing wrong with this right here. Yet. 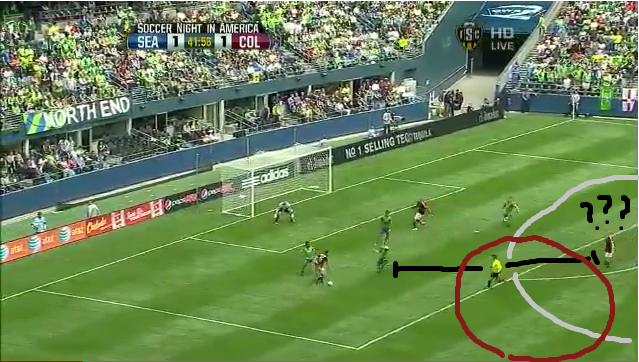 Well, OK, it was fairly obvious. This one is pretty straight forward. Between the last slide and this picture, you can see that Wells Thompson still has the ball, but you can also see just how far Erik Friberg has tracked back. In fact, he's now standing in his own box, as if he's going to challenge for the ball in a double-team. OK, nothing wrong with that, but look at Larentowicz. He's camping on the semi-circle of the penalty box wondering why he is all by himself. Just as Thompson was wondering "where have all the midfielders gone?", Larentowicz now has his own circle of grey.

The black bar shows the distance between Friberg, and where he should've been. Or at the very least, the bar shouldn't be so big. Because of that, I firmly believe Friberg had no clue Larentowicz was there. It's just not in his job description to worry about him, that's Ozzie's job. 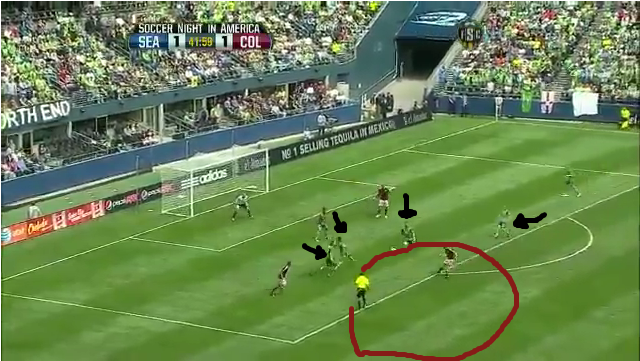 OK, maybe I could've drawn the burgundy blob shape a bit better, but you can kind of see it here. In the previous picture, that burgundy blob/circle is where Friberg should've been. Because that's his position. At least in a 4-4-2.

The burgundy blob shows Larentowicz time on the ball, because that's the edge of the line where suddenly everyone starts to close down. Judging by the size of the blog, I'd say that translates into roughly half a second of time. Do you know what you can do in half a second?

Many, many things. But I'll just leave it at 'taking well-placed, well-aimed, well-powered one time shots'. 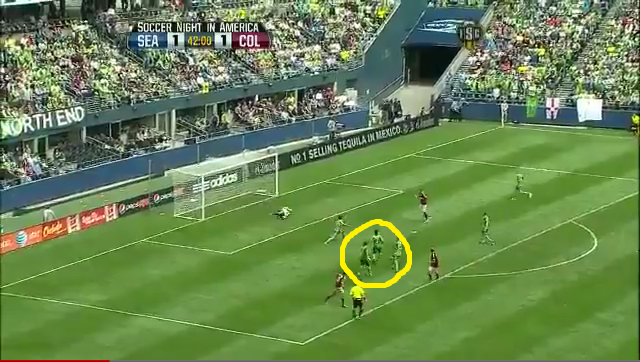 I know it sucks to rub it in, but this is proof that you were not where you should've been. Three Sounders are caught in a yellow circle playing ring-around-the-rosie. Or rock paper scissors. Or something. But at this point, they are all just ball-watching. And goal #2 rolls into the corner of the net. 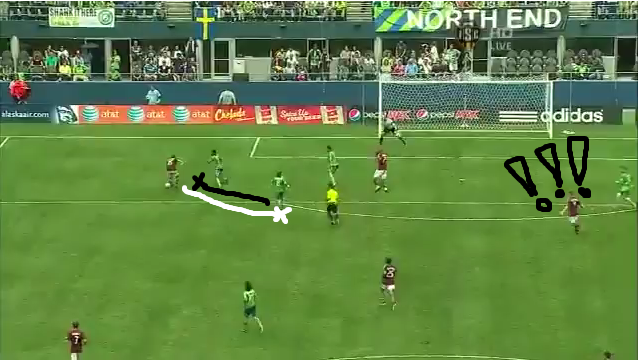 And again, just to re-illustrate the point, here is a different angle. This angle makes it especially clear to see just how much Erik Friberg gets sucked into the ball. The black line shows his path, which is essentially running right into where James Riley is trying to do his work. Honestly, Riley would probably appreciate it if Erik left him alone in peace.

Because guess what that white line represents? The ball. Best part, Larentowicz is waving his hands on the opposite side of the box, before he runs over to the white 'X' where Thompson collects his assist.

Now, I know that isolating two goals without comparing them to the previous goals is unfair, but these two goals have a glaring pattern. Erik Friberg was out of place, and it's because he twice got sucked into defensive plays where he should have been standing minding his own business. Well, standing in the right spot. See, because Ozzie Alonso is usually the one who gets 'stuck in', where he is the one making tackles and forcing turnovers. Friberg's job is to pick-up the recovery balls, i.e. the loose balls that come out.

So either this is a bad habit that Friberg has of cheating to get these recovery balls (i.e. lurking outside the action) or Sigi is expressly telling Friberg to roam. Roam just means patrol the field, and occupy the free role. But really, that definition is just a cover for the fact that it has no set definition. Friberg has no defensive positioning whatsoever in those two plays. Again, not trying to single him out or say that he always does this, but hey, that's what the autopsy report shows.