When the league announced before the season that Opta was being contracted to gather in-depth stats in league play, stat nerds like myself went giddy at the opportunity for more in-depth analysis of the events that make up a soccer match. But for the first half of the season, the only output we could see was the occasional tweet from Opta which amounted more to trivia than to statistics. But thankfully last month the league got around to releasing a chalkboard product on their site that reveals much more detail and will help us begin to get that in-depth analysis we'd been hoping for.

Today I want to start with passing percentage in the offensive third. Passing percentage and time of possession are the two 'advanced' stats that are most often tracked for soccer matches and most likely to pop up during a broadcast. But both leave something to be desired when it comes to actually evaluating the teams on the field, because both are sensitive to playing style and the scoreline. A team that's inclined to play possession football is going to get a lot more time of possession, whether they're having a good game or a bad game. A bunker-and-counter team is going to have less possession, regardless of the quality of the game. And the same is true of passing percentage, where a team that wants to pass uncontested balls around in their own half to setup attacks (like Barcelona) will have tremendous passing percentage versus a route 1 team that's sending lots of balls deep down the field to be contested by defenders, even though either strategy can lead to goals if played well.

One way to transition passing percentage into a stat that's more associated with quality is to look at passing percentage in the offensive third. These are passes that are almost always contested by defenders (assuming there's a defender in the area), they're a higher degree of difficulty, and they're more likely to produce an offensive opportunity. By ignoring the easy passes in the back and moderate passes in the central midfield and focus only on the hard passes in the offensive zone we can isolate out those passing players and teams that are doing the hard work towards creating scoring chances.

Thanks to the Opta-gathered positional data we can now isolate those passes. For purposes of this analysis I defined the offensive third as literally the third of the field nearest the opposing goal. You could reasonably argue that the last 40% or 20% of the field might be a better cutoff, but a third is a fine cutoff for a first look.

First I want to confirm that Offensive Passing Percentage (which is what I'll call it for now) does correlate with offensive performance. So I rounded single-game passing percentages into the nearest 5% and clustered all performances with the same rounded percentage and then checked to see the average goals per game and shots per game generated by that team in those games. Here are those results (and I apologize for the lack of axis labeling. Excel was winding me up.) 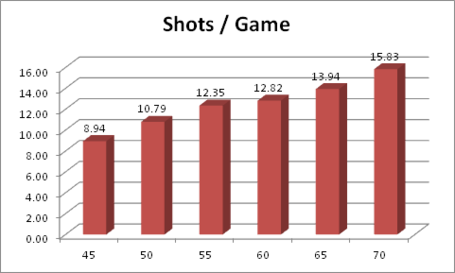 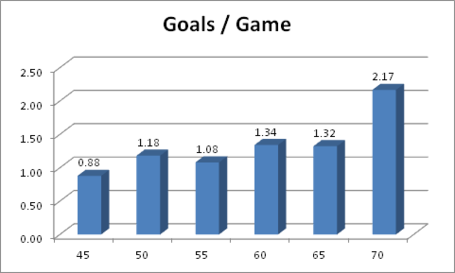 There looks to be a clear association between a higher offensive pass percentage and the number of shots generated by a team per game. Teams with some of the highest percentages generated nearly twice as many shots as teams with the worst performances. The correlation with goals is less linear, though generally positive. The noise here is no doubt a result of the erratic ability to turn shots into goals, but based on our earlier research on shot data, I'm comfortable looking at the shot correlation and inferring a positive relationship between offensive passing percentage and offensive chances.

Here are the team-level results for the Seattle Sounders thus far in league play this season:

Overall the Sounders averaged 56.3% in their wins, 51.9% in their draws, and 50.9% in their losses. Their best game of the season by Offensive Pass % was the last game against Colorado, which I think could fairly be called their best offensive game of the season. They scored 4 goals, largely thanks to a Colorado defensive line that insisted on playing up high and letting the Sounders pass and run rampant in the backfield. Their worst performance of the season was the draw in Philadelphia, which shouldn't come as a surprise if you remember the torrential conditions the game was played in.

We can also measure the stat at the individual level. I calculated the stat for every player that has attempted at least 120 passes into the offensive third this season — a pool of 200 players. Here are the top 10 players in MLS by Offensive Pass %:

That's an interesting mix of forwards and attacking midfielders. Dawkins is the far and away leader, which may not be a surprise given his Premier League pedigree. The Portland Timbers are the only team with 2 players in the top 10 and both Nagbe and Perlaza have been integral to their offense (Kenny Cooper is ranked 109th at 56.3%, incidentally).

Here are the Sounders player who made the minimum passes cutoff:

I'm not sure this would differ from anyone's expectations significantly. Alonso's passing game seems to have taken a big leap forward this year as he's started to spray shockingly accurate balls out to the wings. Riley's always been a pretty good distributor from the right back position. Rosales might seem a little low but note that players who frequently attempt more difficult passes (like crosses into the box) will get a lower percentage, though their successes are likely to be more dangerous. Keller rounds out the bottom of the list and in fact the bottom 14 players are all goalkeepers, as their passes into the 'offensive third' are almost exclusively long goal kicks that are unlikely to cleanly find an attacker.

Also, apropos of nothing, an odd result: