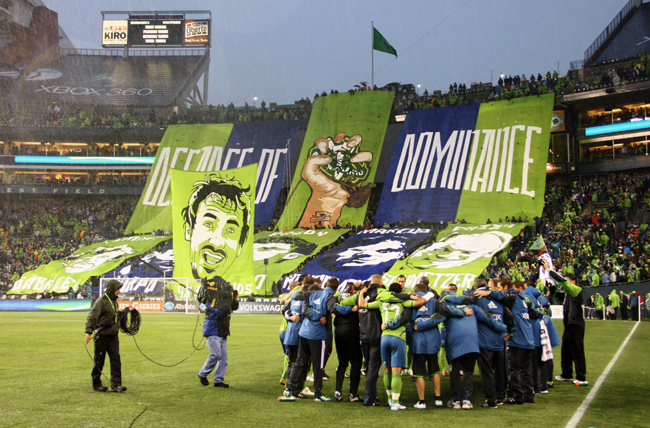 Ed. - Featured guest post from Sophie McDonnal, who is an Offside reader and has never before written about the Sounders. Sophie rounds up everything you need to know about this week's Cascadia clash. Let her know what you think!

Round Three of the Cascadia Cup will descend upon the Rose City this weekend, as the Seattle Sounders travel south to take on the Portland Timbers. The Seattle leg of this match-up ended in a 1-1 draw that left the Timbers happier than the Sounders. Seattle were rightfully disappointed by that result, but it comes down to a few key issues: formation, set pieces, and the left flank.

From the Sounders' perspective, one large issue I had was with the personnel. The lineup was distinctly compromised in the midfield, with a diamond shaped four comprising Fernandez on the left, Evans on the right, Alonso in his usual holding central role (the “destroyer”), and rookie Servando Carrasco above him in the “creator” role. I have two main issues with this formation: Carrasco and Evans. These are two players I really like, but not in these positions. Evans has much more potential in the middle, in that top part of the diamond, than he does on the right. His strength lies in decisive one touch passes to create chances, not in runs up the wing. In addition, he was playing slightly injured and was taken off shortly before half. Carrasco, on the other hand, I see as more of an Alonso-type player. And throughout the game, that was clearly evident; Servando was frequently absent in the Timbers half and could usually be found tracking back to the same level as Alonso or in some cases even deeper.

In this second chance, I would really like to see another 4-4-2 with a diamond midfield. However, Friberg would make a much more suitable attacking central midfielder, with Rosales taking over on the right. Erik Friberg, Seattle's new Swede, recently picked up his first goal and has looked strong in that role. Ordinarily, I would prefer Brad Evans, but he is coming off a recurring hamstring injury and he'd do well not to rush back from it. The right flank, on the other hand, is Rosales's preferred position thanks to his blistering runs, accurate passing and strong crosses. Hopefully Sigi Schmid will go with something like this in the midfield, and not play Carrasco, etc, out of position.

Up front, Montero's shooting prowess is going to be key. The Portland defense, particularly with their aerial ability, make balls into the box difficult to win. Seattle's best chance for goals is getting the ball to Montero, among others, on the edge of the area. Free kicks will also be important, with Seattle's recent successes from set pieces (Wahl against Revolution, Montero against Toronto, etc.) Levesque could be an important figure in that regard, considering he is the unofficial mascot of the rivalry. A former USL Sounder, Roger is easily the Timbers' most hated Sounder. We'd all love to see a goal celebration in front of Section 107 to silence the Timbers Army. Playing Levesque up front alongside Montero could nudge this game towards a testy affair with plenty of free kicks to capitalize on.

Unfortunately, the Timbers are also very skilled from set pieces. Jack Jewsbury, the first choice free kick taker, has done extremely well recently in hitting his man. And with such a wealth of height in the Portland team, there is no shortage of men to aim for. Particularly lethal in the air is Futty Danso, who has connected twice with Jewsbury set pieces for goals. The good news for the Sounders is that both of these players are coming off injuries of the shoulder and hamstring, respectively. They are both listed as probable, as of the Tuesday the 5th, but are sure to be off their top form even if they are playing. That said, other target men such as the towering Kenny Cooper are sure to be in the eleven. To defend the set pieces, commitment is hugely important. Frequently, the Sounders would leave the line on corners and free kicks high, allowing the Timbers players to get behind them unmarked. Disciplined defense and care in conceding free kicks are going to be crucial to stopping the aerial crusade.

Portland's superiority in the air is an issue for the Sounders offense, as well as defense. While one of the few times a Sounder got a header off in a dangerous attacking position did result in Seattle's only goal, those chances were rare. As such, simply punting the ball into Portland's half will not suffice as a goal-scoring strategy. Short, accurate passes to build up are going to be crucial, as an alternative to long balls. In addition, look to take free kicks directly instead of like crosses. When Seattle get corners, taking them short and trying to work them into dangerous positions might actually be a more viable strategy than crosses. Overall, open play needs to be the focus of goal-scoring chances.

The other glaring issue I saw in the I-5 Derby Part I, aside from the formation and aerial issues, was the crowding on Seattle's left flank. All moves through El Flaco on that side were shut down by numerous Timbers materializing. Particularly threatening is Alhassan, whose pace up the Portland right flank was unmatched by a frequently roaming Fernandez. In order to neutralize this threat and open up the offense, Fernandez will have to be a little more disciplined in staying to his position and players like Alonso, who are responsible for instigating the attack, will have to look to distributing the ball more through the center and right portions of the pitch. When the main defensive strategy consists of crowding players out, a larger field of play could be key to breaking the Timbers down.

When these two sides met in May, they were even on points and the Timbers had two games in hand. Since then, the Sounders have been on the rise and Portland have drifted off the mark a bit. Currently, the Timbers are 8th in the Western Conference on 18 points, having played 16. The Sounders are doing much better, in 3rd with 20 games played. The form table tells a similar story. May 25th, to FC Dallas, was Seattle's last loss, while the Timbers' last win came on May 21st against the Columbus Crew. With a few tactical changes, we could easily be celebrating in Portland by taking all three points.