The headline should have read "Sounders overtake Dallas and move closer in fight for Supporter's Shield".

My head is so full of frustration and rage right now. How many times can you possibly just ignore the blatant opportunity given to you, not just once, but twice, three times, on and on and on.

LA gifted us with an opportunity last week when they beat FC Dallas, leaving us only one point behind. And before that, Portland did us a huge favor when they beat LA. How do we repay these chances to establish a solid foothold towards the Supporter's Shield? We blow our chances as if they never existed. First with the loss against Houston, and now essentially a loss at home.

Yes, Alvaro Fernandez should have converted the first penalty. It's his job as the primary PK taker to make a non-issue about it, but he missed. Unlucky or not, that should have been Seattle's first goal.

That first goal aside, I am honestly at the point where I might just give up on American soccer. Everything. I don't care. I swear to god, if I ever, EVER, see this guy waiting at the bus-stop, standing in line at the grocery store, feigning any sort of competence while officiating another soccer game... 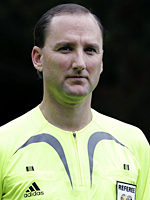 Kevin Stott, you are FOREVER on my shit list.

We have ten matches left. The next game away at Dallas is the last match where we can control our destiny, the rest of the season's matches are against contenders and the only thing left there is to win. At this point, we should all be praying and rooting for a Philly upset over Dallas, which would give us an enormous opportunity as we'd be equal with Dallas.

I'm not necessarily going to admit we have any problems, yet. But I will just kindly remind everyone that the transfer deadline ends this Sunday night. Let's see what happens.