Share All sharing options for: Mysterious Case Of Missing Right Midfielder - Tactics of Seattle at Dallas

When Mauro Rosales scored the goal that would be the winner against FC Dallas Saturday night, he was certainly to the right of Fredy Montero and the rest of the offense. But watch the highlight again, and you may notice that he's in a central space. But that wasn't his only time centrally. Yesterday saw a different Rosales.

In the past he's hugged the right touchline and centered in crosses - either low or high. This has been true in a vast majority of his matches, except for the small sample where he's been a forward or center mid by design. But with the attacking four being Lamar Neagle on the left with Montero and Mike Fucito up top, the inclination for all was that Rosales would be the right sided player.

This seemed to be even more likely when we learned of the Zach Scott for James Riley tactical switch. This would mean that Riley's crossing ability (maybe 2nd on the team) and flank speed wouldn't be available. While defensively this meant that Seattle was more sound against counters through Brek Shea, there was an absence offensively.

That empty space was not filled. 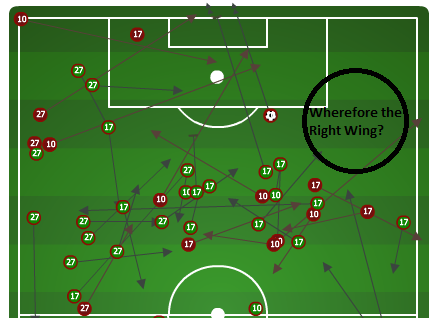 That's from the first half chalkboard with only the band of three of Lamar, Fredy and Mauro listed, but including more players doesn't actually fill the empty hole. Adding in Fucito and the two centermid of Erik Friberg and Osvaldo Alonso still leaves the empty space.

Now, this is only for the Opta trackable actions, but if you spend some time hovering over the player names and look at heatmaps you'll notice that the far right channel is basically unoccupied, with only Montero and Neagle (late in second half) taking that space at times.

If you felt that Dallas was able to flood Seattle's right defensive side, that's because they did. 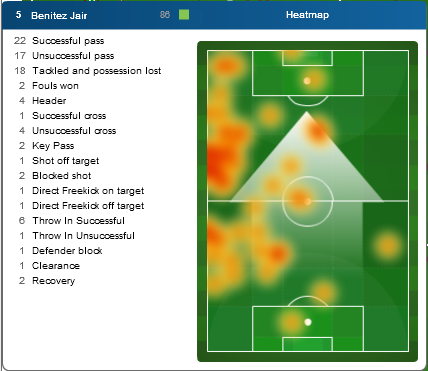 Jair Benitez was more of a left attacking player than a left back. With Seattle not putting a man into that space, Dallas did. They were able to cheat forward. If we are looking for a reason why Seattle was unable to create as many chances as usual the tactical shift from Riley to Scott and the shift of Rosales to being a third central attacking player is probably why.

The Sounders chose to give up certain spaces. One to focus on the defense, and the other to flood the opposing centerbacks with three players rather than a typical two. It worked in a one-off game, but probably is not the solution long term.