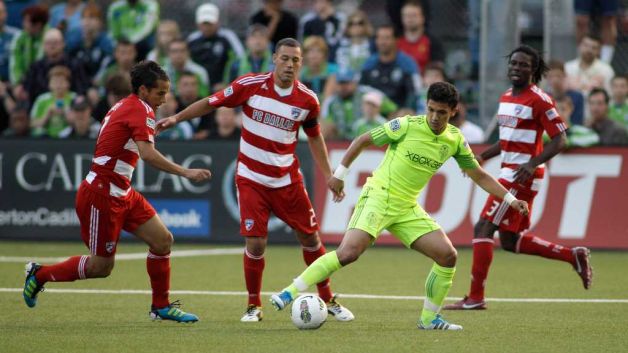 Freddy Montero and the Sounders curled their way into their third successive US Open Cup Final.

It was a closely fought match, but Freddy Montero's beautiful left-footed curler was enough to defend the cup and give the team the needed opportunity to make history. The Sounders will be in the Open Cup final on October 4th for the third successive time.

They will face the Chicago Fire, who advanced after beating the Richmond Kickers. The final will be at home in Seattle.

The stubborn Dallas team came out strong from the get-go, and it was a physical and touchy affair. A total of 30 fouls were committed, with seven cards dished out. Many players were upended and tackled, and Mike Fucito finished the game with a bloody gash on his head (he looks like a zombie here). With both teams getting comfy with one another, you could sense the burgeoning of a real rivalry even over the live internet stream.

The chants of "Blackburn reject" from a portion of ECS didn't help.

Regardless, this is a pretty big moment. With the win, Seattle will have until the final to still be in running for a quintuple. Yes, I'm including the Club World Cup.

So let's enjoy this win, and pray that this is the last time we'll have to face these guys again (but most probably not).