Review and Preview Mashed Into One

Share All sharing options for: Review and Preview Mashed Into One

I had totally meant to come home Wednesday night and get a review up of that wild win. So a quick recap now before I jump into a really late preview against SKC.

First up, does Pat Noonan run on wind power or gasoline? Because he is an emotionless, sparkless robot machine. I understand Sigi throwing him out there against San Francisco of Panama as a new test, but at this point Sigi's seen all he needs to see. On Wednesday, he did about par as his previous appearances dating back to the pre-season Cascadia Summit, which was absolutely nothing. I guess Noonan is the team funny guy, and he does a lot more with his 'veteran' presence as a locker room leader rather than being a field leader. But his complete lack of drive or execution or creativity or passion left me flabbergasted. I don't say this often, but ship him off. Overpaid, and to no positive effect, I just don't see him serving any purpose to this team.

What Sigi had to say about Pat.

(On Pat Noonan getting the start...) "Noonan up top. Roger looked tired to me so that's why we didn't include him in the 18 tonight. Noonan is a player who combines well. We felt it was going to be a game where they were going to play more defensive and keep guys back. We wanted a player in there like Noonan who knows how to find little spaces and combine well rather than going with speed or some other attribute."

(On Pat Noonan's play...) "I thought he played well. His 60 minutes were good. He held the ball for us well and he allowed us to push up as well."

Second point. If Alvaro Fernandez does not yet know why he is a DP and why he gets paid so much, the first goal that leveled the fixture is exactly why he gets paid to wear Rave Green. He put in a spirited and determined performance against San Francisco, the kind that's needed when the rest of the team is dragging you down and the referee's calls and the few shots you get just aren't rolling your way. He is our team's grinder, the one who rolls up his sleeves and hustles so the team can have a chance at winning. Don't believe me? He led the team with shots on and off goal. And he'll put it on all on the line, so that others around him can have the perfect shot, as he showed when he assisted Jaqua's game-winning goal.

I love him. And for that, Alvaro, this beers for you.

With the win, Seattle booked a ticket into the group stages of the CONCACAF Champions League. The Sounders will join defending champions Monterrey (MEX), Communicaciones (GUA), and Herediano (CRC). It's not as difficult a group as last year, but the defending champions will be standing there like a giant pit bull terrier licking it's chops to get at us again. I know that some people don't understand why we throw ourselves into meaninglessly difficult competitions with foes like Monterrey, but this is an excellent opportunity to stand up and seek revenge for the mauling we received in last year's group. And Monterrey, well they seem like the perfect target to seek and destroy. The Church of Fucito is ringing its death knells. 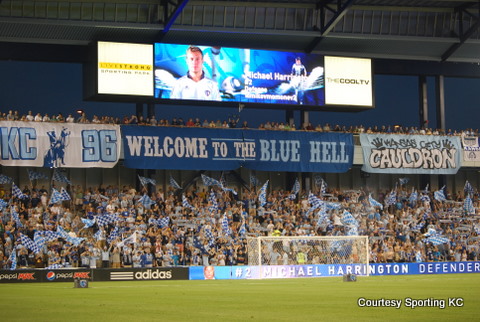 So now, onto the Sporks.

First, we HAVE TO WIN. No If's, But's, or What's. A win in the swanky Livestrong Sporting Park would mean we would be 66% of the way towards reaching our goal of meeting FC Dallas at the door. Guys, buck up and do it.

Second, it's hard to ask the team to find the reserve tank, because they just played 120 minutes only a few days ago. I can imagine the starters got some much needed rest, but at this point it's not just physical fatigue but mental fatigue. I can also imagine some players like Alvaro Fernandez being battle-hardened, but there is the risk of too many players being battle-worn. Those two-a-days and pep talks during the pre-season? That stuff counts right now.

Third, SKC are flying. They have a favorable calendar to close out the season, and newboy Omar Bravo is a big part of that. And with Teal Bunbury finding his touch again, they'll be anxious to start the scoring ASAP. With Seattle's leaky defense, especially in the first 20 minutes, we can only win if we don't dig ourselves into a hole right away. I'll repeat, if they score first, we are pretty much looking at walking away with one-point.

Ones to Watch: Omar Bravo
Sounders to Step Up: Fredy 'Dutch Rat-tail' Montero