Share All sharing options for: Sounders on Campus: Week 3 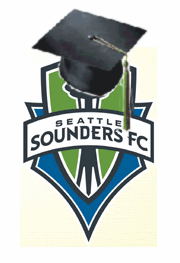 We've reached week 2 of the college soccer season and despite their all being freshmen, some of our Sounders Academy players are already making an impact on the college game. Last week's edition had a little intro to each player for those who didn't watch the Academy season, so refer back to that if you aren't sure who some of the players are. This time I'll just focus on the results.

After playing 200 minutes in the first two games of the season for Akron, Yedlin played another 196 in the next two, demonstrating clearly that he's the every-minute right back in Caleb Porter's system. The win over Cal State Northridge was the second consecutive double-overtime game and this one also looked destined to become a draw, but in the 106th minute Yedlin crossed a ball to Scott Caldwell, who took it off his chest and knocked it into the net, resulting in a Zips win and the first assist of DeAndre's collegiate career. The week 3 match with St Louis was a more typically dominant Zips win, and the first goal came off of a corner that Yedlin earned with a run up the right wing.

Duke had a make or break early two weeks of the season with home games against #9 UCSB, #17 SMU, and #24 Virginia potentially driving them up the rankings. Unfortunately, they lost them all in close 1-goal games and now find themselves at the bottom of the standings in a very tough ACC. Palodichuk featured heavily in the games, playing every minute in all three. In the UCSB game he scored the first goal of the match just 48 seconds in when he tapped in a cross. He also had a dangerous free kick that the UCSB keeper dove to push wide. He finished the game second on the team with 4 shots, 3 on goal. The game against SMU was also an overtime loss. This one was scoreless going into overtime, but maybe the best chance was a Palodichuk header that beat the keeper but was headed off the line by an SMU defender — one of 4 shots by Nick. The Virginia game was a regulation time loss after the Cavaliers scored early and the Blue Devils weren't able to equalize despite a ferocious second half. Palodichuk was tied for the team lead with 8 shots and was called out by coach John Kerr after the match:

"I thought [Andrew Morales] and [Nick Palodichuk] were a class above tonight," Kerr said. "Morales continues to impress and has improved in the past month. Palodichuk just missed on a couple of headers and had a left footed shot just miss. They were great tonight." 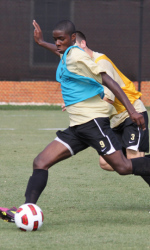 Wake Forest has also stumbled out of the gate in the ACC. After an upset loss to South Florida in week 1, they were faced with preseason #1 Louisville and weren't able to create their own upset. Okoli played 85 minutes at forward but had a quiet game, registering no shots. Their next match had the potential for two Sounders Academy products to face off against each other for the first time at they took on Oregon State, but neither Seattle player took the field for the Beavers. Okoli played another 100 minutes and had one shot, which was on goal but saved. The game finished scoreless after two overtimes, which meant that the Deacons had yet to score a goal in the regular season. Fortunately, the managed to find the net in their conference opener as they beat Cleamson. Okoli played as a substitute in that match and didn't take any shots in his 23 minutes. It looks like he may have been a victim of the team's move from a 4-3-3 to a 4-4-2. Understandably the coach would want to shake things up after such a long goalless run. We'll see if that change sticks through the coming weeks.

The Broncos had a dense couple of weeks with four games to play. But even with the schedule congestion, senior Kevin Klasila is still firmly ensconced as the starting keeper. With only one loss in the 4 games and two consecutive shutouts pushing Santa Clara to the top of the WCC standings, that looks unlikely to change anytime soon. I contacted the Santa Clara athletics department asking into Herman's status and it sounds like he's currently rehabbing a foot injury. Given that they have Klasila and another solid backup in Larry Jackson, it's possible (I would say likely) that they'll redshirt him when he's healthy again to preserve a year of eligibility and we won't see him on the pitch this season.

The Beavers are another team with a dense four game schedule over the last couple of weeks, and they had to play them all on the road. An East Coast road trip featured a heavy defeat at now #1 ranked North Carolina and then the aforementioned draw with Wake Forest. Forward Paden came on as a substitute in the North Carolina game and put a shot on goal. Neither he nor Brockway played in the Wake Forest match. The next week saw a road trip a little closer to home through California. Paden again came on as a sub in an overtime loss to UC Davis but didn't have any shots and also subbed into the win over Sacramento State and got one shot off. Next week the Beavers are in Spokane to play the 'Zags before they finally get a chance to play at home again.

After the big upset over South Carolina in Week 1, the Cougars continued the momentum in a scoreless draw with a tough Princeton team. Peterson played 58 minutes in the double overtime game and only 26 in the following loss to Rutgers, but it was the next week when he made his impact. Troy scored the first two CoC goals 50 minutes apart to stake the team to a 2-1 lead. Two days later he played 93 minutes in a game that had to go to overtime despite the Cougars having a 31-11 shot advantage, though only one was Troy's. Charleston has hovered on the edge of national rankings since their week 1 upset and they may move back in after this week's wins.

After getting into the national rankings picture after a solid early season the Huskies have scuffled a bit in the last couple of weeks. The win that got them into the rankings was a dominant — though only 1-goal — win over Loyola that saw them concede only 4 shots — none on goal. Then they had a respectable draw with then 22nd ranked Florida Gulf Coast after outshooting their opposition 22-9. But in their first regular season game in Seattle (though technically not a home game) they were held scoreless by Seattle U. White didn't get in on any of the action.

We had a nice correspondence from a member of the White family after our last Sounders on Campus update and he gave us some additional details. First, the stats we had for Drew's senior season were actually for his junior year. His senior season he had 28 goals and 11 assists, which he earned primarily while playing as a winger or wing forward on the left, though he also played fullback. The Sounders are organizationally inclined to fullbacks who have a midfielder's game. James Riley was originally a right midfielder. Yedlin has been developed as an aggressive fullback and our GA signing Michael Tetteh plays a similar game on the left. So it would be appropriate for the team to nurture a solid attacking player at left back. But White is currently behind a 5th-year senior and team captain, and our correspondent tells us that coach Clark is still considering whether it would be best to redshirt Drew and save a year of eligibility.

Rodney Greiling looks to continue to be a backup keeper for Florida International, who went 1-1-2 in their four matches. Chase Hanson started all four games for Barry University, who were ranked 10th in the Division 2 poll as of last week and may be even higher this week after winning their first four games. Yordan Rivera had a goal and 3 assists in 4 games for Ancilla College, all of which were wins for the Chargers. After not starting in Seattle Pacific's first regular season match, Evan Robicheau came on as a sub in the second (a 1-3 loss) and then started in defense in the third (a 2-1 win), earning a yellow card in each.