Share All sharing options for: Sounders on Campus: Week 4

Most teams begin their transition into conference play this week and the alma maters of the Sounders Academy players are doing well overall. 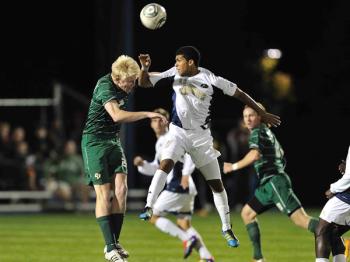 On Friday the Zips played another Top 25 team in a game broadcast nationally on Fox Soccer Channel. It would end up being their third double overtime game in five regular season matches, and in holding on to the draw despite playing down a man for almost an hour Akron continued their home unbeaten run to 41 games. Yedlin didn't get on the scoreboard, but he was instrumental in the Zips goal, as he was the player to run up the sideline and play the ball off of a UNM defender, earning the corner that resulted in their only score.

On Sunday Akron increased the streak to 42 as they beat Cal Poly on a late penalty kick. Once again Yedlin was involved as he was the player taken down in the box to earn that penalty. You may be noticing a theme here. By my count DeAndre has created a goal either by a direct assist, by earning a corner, or by earning a penalty in every Akron game this season barring the scoreless draw against Cal State Fullerton. Needless to say, that's phenomenal production from a freshman fullback.

After a very disappointing start to the season that saw the preseason ranked Duke fall to the bottom of the ACC standings, the Blue Devils roared back last weekend with two overwhelming wins in which Palodichuk featured prominently. Against Clemson the midfielder scored a free kick goal and assisted on two others, all in the second half. Against the UNC Wilmington Seahawks he scored another goal in the second half on a tap in.

The Deacons finished off a six game homestand to start the season with split results. Okoli played as a substitute in both matches, earning 45 minutes and getting off one shot versus Cleveland State and playing 35 minutes without a shot in a narrow loss to a ranked UNC.

The Cougars took a long 2-game road trip to Denver, where Peterson started in both matches. Charleston suffered only their second loss of the season against Air Force, but bounced back to beat Denver on a late winner assisted by Troy as he knocked a ball over the back line for a forward to run onto and score.

As has been the case so far this season, Paden picked up some substitute minutes as a forward and Brockway didn't play as the Beavers traveled to Spokane and narrowly beat the Zags. This weekend Oregon State plays in a mini-tournament at home and then takes on Washington in Corvallis the next weekend.

Hanson continues to get significant minutes for Barry University as they won two more to continue a six game winning streak to open the season that now has them ranked 5th in Division 2. He played 45 minutes as a sub and earned an assist in their first match against Johnson & Wales and played the full 90 minutes against Nova.

As we relayed last week, Herman is likely to be redshirted this season as he's behind two solid goalkeeping options for the Broncos. Meanwhile the team is riding high with a big away win at then-14th ranked Cal and the team is now on the edge of a Top 25 ranking themselves.

We haven't yet heard whether White has been officially redshirted, but he's still on the sidelines thus far. The Huskies took their own long road trip down to Texas for a two game weekend, but only one game officially happened. The match with SMU was called after a scoreless first half due to weather and won't be made up. But first Washington beat Tulsa on an overtime goal in a game that was itself delayed due to lightning. The win means the Huskies are still undefeated on the season, but they'll be tested tonight in their home opener versus Portland (tickets still available!)

Florida International lost one and won one without Rodney Greiling making an appearance in goal. After a good couple of weeks Ancilla College lost 2 matches in a row by a combined 10-3 score, but Yordan Rivera assisted on 2 of the 3 Chargers goals with a corner and a free kick. Local boys SPU Falcons finished up their first two conference games before an epic 8-game road trip (okay, they won't actually be on the road for the whole month) with two 2-0 wins. Evan Robicheau started in both matches and earned an assist against Montana State Billings with a free kick cross to the excellently named Kodiac Gamble for a headed goal. The Falcons have now won all three games that Robicheau has started.

Highline Community College won two matches by a combined 6-1 thanks in part to two goals and an assist from Darwin Jones. I hear that Jones is planning to transfer to Oregon State (where he'd join Paden and Brockway) after a term at Highline. We'll keep an eye on that. Shoreline picked up two losses and a draw to continue a winless start to the season, but the recent matches included a Jeremy Wentzel goal and two cautions. By my count that's now 4 yellow cards for the evidently ferocious defender.