Share All sharing options for: Sounders on Campus: Week 5 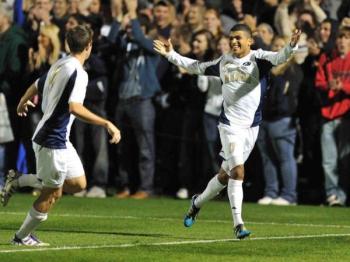 As we noted last week, Yedlin has involved himself in a goal in every game the undefeated Zips have played this season other than their one scoreless draw. That trend continued when Akron traveled to Tulsa and in the ninth minute the fullback stole the ball at midfield and played a quick pass forward to earn another assist when Darren Mattocks knocked it in for the first of his eventual hat trick. At that point the only thing DeAndre hadn't accomplished offensively was scoring a goal himself. He remedied that four days later when the Zips took on in-state rivals Ohio State in front of a record crowd of 5,819 (a number that compares favorably with the Columbus Crew just down the road). In the 21st minute he scored the first goal when he blew through two defenders and cut the ball from a tight angle to beat the keeper on the near post. If you want to see some video of that (and I know you do), here it is.

At this point the subject of Yedlin leaving early has to be broached. The Sounders are a deep and successful organization and have the resources to be patient when it comes to young players and prospects. But right back also happens to be a position of need as we have little depth behind James Riley. Losing players early is certainly something Akron and Caleb Porter are accustomed to. Teal Bunbury left the program after his sophomore season just a year after Steve Zakuani did the same thing. Yedlin leaving after his freshman year is probably a bit of a stretch, but if he keeps playing at the level he's at now (and if the organization believe his defense is at an appropriate level), it's something to keep track of.

Duke continued their recovery from a disappointing beginning to the season with two dominant wins. The first featured the first ever matchup of Sounders Academy products as Palodichuk took a familiar starting midfield position for the Blue Devils and forward Sean Okoli started for Wake Forest. Each had a shot on goal but neither ended up on the scoresheet. In Duke's second game Palodichuk showed up in a big way, scoring two second half goals and bringing his season total to five, which puts him second on the team and tied for 8th in the ACC.

The Deacons had a dense week of three games — and it would have been four had a match at South Carolina not been cancelled due to lightning. As mentioned, Wake Forest lost pretty convincingly to Duke with Okoli in the lineup, but came back to win their next two. After some time off the bench earlier in the season, the Sounders Academy striker started all three games this week. Unfortunately, that playing time hasn't yet led to much production, as he's good for a handful of shots a game but has yet to earn either an assist or goal in the regular season.

Charleston's only game was a dominant divisional win over Wofford. Peterson continued to feature prominently by starting the game and scoring the final Cougars goal (on his only shot). He's now second on the team with three goals and has done it on only 9 shots.

The Beavers finished up their nonconference schedule with a pair of 1-2 losses to finish last in their own Hensor/Zaher Nike Classic tournament. Paden came on as a substitute against UMKC but didn't feature in the Cal State match. The Beavers take on the Huskies in Seattle tomorrow to kick off their Pac-12 schedule.

After a now-routine win over St Thomas in which Hanson didn't play, he was back in the lineup when the then 5th ranked Buccaneers faced then 2nd ranked Rollins in a titanic Division 2 matchup. Unfortunately, they gave up a goal in the final minutes to suffer the 1-2 loss and have dropped down to 9th in the rankings.

After climbing to the edge of the national rankings with a win over Cal, the Broncos earned two draws in their two final nonconference matches. Kevin Klasila continued to start between the pipes in front of Herman.

After their long (and aborted, thanks to the weather) road trip to Dallas, the Huskies came back to lose their home opener against an always dangerous Portland team despite outshooting them 24-7. But they bounced back to win their own Husky Soccer Classic tournament with two victories and climbed back into the national rankings before opening up the conference season in Corvallis this weekend. Drew continues to bide his time until coach Clark calls his number.

Rodney Greiling's Florida International lost one in double overtime to Marshall and then had a game cancelled due to weather, but remain in second in the Sun Belt Conference. Yordan Rivera's Ancilla College split two games in their resumption of conference play. In the second match Rivera scored two goals in the first 10 minutes and assisted another in the 15th to lead the team to a 4-0 victory. Seattle Pacific won all three games this week (putting them at 6 straight wins) and are now getting some national ranking votes. Evan Robicheau started all three games but didn't show up on the scoresheet.

Highline Community College continued to enjoy the presence of Darwin Jones as the freshman scored two goals and earned three assists in two victories, including one over the struggling (and winless) Shoreline, who lost their two games this week by a combined 0-9, though Jeremy Wentzel did break his streak of picking up cautions by not earning a card in either match.