UPDATE: There were 230 orders placed during the pre-order phase. Thanks to everyone who placed an order. We Will still have about 100 left to sell, but they are now $20. Thanks for the support. Details should be finalized soon on the March 14 away-viewing party.

NOTE: As a point of clarification, the pre-order price of $15 is good until Jan. 20. There will still be scarves available for purchase after that, but they will be $20 and be in a limited quantity. Sorry for any confusion.

At long last and after much work, Sounder at Heart is finally ready to unveil our 2012 "Nos Audietis" scarves. This year's scarves are loaded with improvements both visual and material, and we're actually able to offer them at an even better price than we did last year if you are willing to make a pre-order. I guess I should get all that stuff out of the way before getting into all the fun stuff about the scarf.

About the Pre-order (now passed)

The scarves will be ready in time for a viewing party during the away leg of CONCACAF Champions League on March 14. In order to make sure we can do that, we'd like to place the order by this Friday the 20th. As a way of enticing you to make the decision easier, we are offering the scarves for $15 apiece if purchased by this Friday at noon. That price will only be available to people who purchase them by that deadline.

We will continue to take orders all the way up until the event, but they will be selling for $20 (same price as last year). After the event, the price will go up to $25 but that price will include shipping. If you are unable to pick the scarves up at the event or arrange some other kind of hand-off, there will be a $5 shipping cost for up to two scarves. Add on an extra $2.50 in shipping for each additional scarf after two that you need shipped.

Send me an email and I'll give you instructions how to pay, preferably through PayPal but I can also take checks. After the jump, I'll go into some more details about the scarf and the design.

Once again, we have gone through Ruffneck Scarves as our producer. That's the same company that makes most of MLS teams' scarves, as well as ECS's and Gorilla FC's. Unlike last year's scarf, we plan to make an order big enough that will allow us to offer the same quality as the ones ECS has. They are approximately 7'x58', which is about 6 inches longer than ours were last year. They are made in the United Kingdom, just so you know. If you like our first scarves, you should love the quality of these ones.

First off, we want to thank Sounder at Heart member Sumanon for working so diligently in designing these scarves. He came up with this basic design pretty early on, but we did a lot of tweaking from there. The big elements should be pretty obvious.

The mountain is, of course, Mount Rainier. The waves on the other side are supposed to represent the Puget Sound. By now, you should be well aware that we've adopted "Nos Audietis/You Will Hear Us" as our site's motto.

You'll also notice that we've revamped our logo. In a lot of ways, the scarf is just a deconstructed version of the logo, but hopefully you don't find that too repetitive. The logo will soon replace the interlocking ropes that have been a part of Sounder at Heart ever since we joined SB Nation and we find it a pleasurable upgrade. Within the logo, you'll see three waves. Those waves are meant to represent the three eras of the Sounders (NASL, A-League/USL, MLS). You'll also notice that the waves look almost like dorsal fins, which is meant to be evocative of the USL-era team's orca mascot as well as a design element of our original scarf. 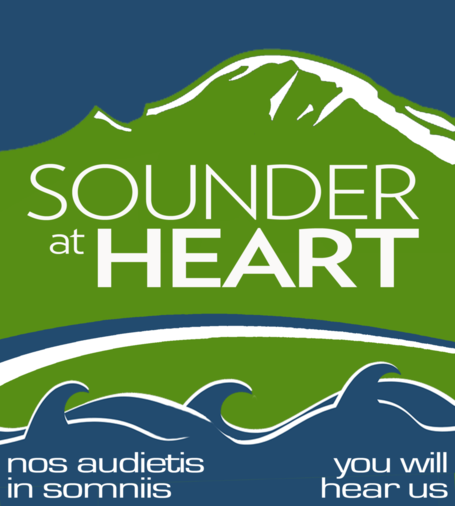 At the end of the scarves, you'll see 10 hashmarks. There is one hashmark for each of the 10 major trophies the Sounders have won throughout their three eras of existence.

Hopefully you find this scarf a significant upgrade over the existing ones. We think they'll make a great addition to whatever collection you have.