Tonight's match against Dallas could either be one of the most important games of the season for both teams or a nearly meaningless exhibition, and we won't know which it is until 15 minutes before kickoff.

Of the three MLS games kicking off today, the least important for the Seattle Sounders may be the one they're actually playing in. Earlier in the day, the Vancouver Whitecaps and Portland Timbers will be playing to decide whether Portland or Seattle wins the Cascadia Cup. And the Los Angeles Galaxy — the only team that can threaten Seattle's top 3 position and right to avoid the play-in round — will be traveling to play the Supporters Shield winning San Jose Earthquakes to keep those top 3 hopes alive.

Just minutes before they kick off, Seattle will find out whether they've done enough in a tough, away-heavy Cascadia Cup schedule to win their first hardware of the 2012 season and they'll find out how much the have to do to fend off Los Angeles. Any result better than the Galaxy's will guarantee a top 3 position, so if LA loses just a draw will do it and it would take a win if LA draws. If LA wins, it's critical to get at least a point so the two teams don't go into a regular season finale in Carson tied on points with LA owning the tiebreaker, meaning even a draw there would drop Seattle to 4th.

FC Dallas will be doing just as much scoreboard watching before the game kicks off. The same Vancouver win that would win the Cup for Seattle would eliminate Dallas from the playoffs, while a Whitecaps draw would force them to go for the win to stay alive and a Whitecaps loss would not only frustrate the Sounders, it would mean even a draw keeps them in playoff contention. But the consequences of the earlier results may have to come in the tactics and attitude more than the lineups.

Unless the result of the Vancouver match is obvious well before the end (because of a blowout one way or the other), the outcome may be known too late to reasonably make changes to the starting lineup. That's an issue for some players questionable with injury — notably Brek Shea and George John — who could play if the season is still salvageable but aren't accomplishing anything more than risking their longer term health if the season is already over.

John's questionable status plus the suspension of Julian de Guzman for yellow card accumulation put significant pressure on a Dallas defense that's already reeling. de Guzman's replacement will be Daniel Hernandez (he of the elbow to Mike Fucito's face), who is clearly in the twilight of his career after transferring his long-held captainship to Ugo Ihemelu earlier in the season and then losing his starting job to de Guzman after he was acquire in trade. Central defender Ihemelu is already out with a long term injury and replaced by Hernan Pertuz. If John can't go, he'll likely be once again replaced by rookie Matt Hedges.

That defense hasn't shut out a team other than Whitecaps since July. In their last match against Chivas USA, they were under siege and barely escaped with a draw thanks mostly to the Goats' inability to finish any of several open chances at the end of the game. If they play at the same level against Seattle, they'll be carved open by one of the most potent offenses in the league, supplemented by a fresh Eddie Johnson returning after international absence.

Seattle, of course, is facing a similar situation. Patrick Ianni is likely out with an injury and Jhon Kennedy Hurtado is returning from a facial fracture and will have to play with a mask if he plays at all. Zach Scott is suspended after picking up two yellows against Real Salt Lake, which means the next central defender in line if Hurtado can't go is formidfender Brad Evans. And Leo Gonzalez remains out at left back. Fortunately, Adam Johansson has also returned from international absence to take over at right back, but with Marc Burch at left we'll have two offense-minded fullbacks.

Which is to say that another 0-0 result for Seattle seems very unlikely.

Here's the average position map for Dallas' draw with Chivas: 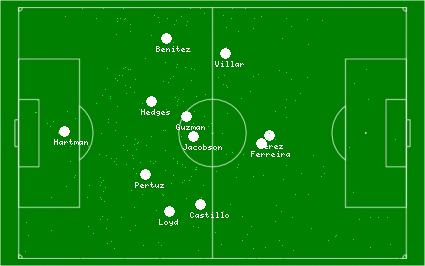 Even without Shea, Dallas' offense remains dangerous, with target man Blas Perez a threat from anywhere in the offensive third. Lurking behind him is David Ferreira, one of the most important playmakers in the league. His return from injury essentially sparked Dallas' run at the playoffs and he leads the team in assists despite only playing in 15 games. Speedy Fabian Castillo attacks from the right wing and either Shea or Ricardo Villar will attack from the left.

The ability of the Sounders to control the Dallas offense may come down to how much help Burch gets in dealing with Castillo. He certainly doesn't have the speed to get back and cover Castillo if he gets caught forward, so he'll rely on help from his left wing partner and shifting coverage from Osvaldo Alonso, Hurtado, or Jeff Parke. Of course, shifting central defensive players opens up lanes from Perez and Ferreira, which will create chances. The better option is for Burch to stay at home and leave the offensive forays to Johansson on the other side.

Another option is to simply outscore Dallas, but even though Johnson will be fresh, the rest of the offense will be a little ragged after a gutsy midweek draw playing a man down for most of the match. Fredy Montero and Mauro Rosales were pulled early from that match (possibly with an eye to this one), but both still covered a lot of ground on Wednesday. Fortunately the offensive depth is good, with Steve Zakuani, David Estrada, Mario Martinez, and Sammy Ochoa (who played less than a half on Wednesday) all available. Even a tired Montero and Rosales will be able to make hay with a makeshift Dallas defense.

And we should also point out that Sigi Schmid won't be coaching this match after being suspended for his comments about Ricardo Salazar. Fortunately, fans can't also be suspended for their comments or there'd be about 20,000 empty seats tonight. I wouldn't expect his absence to make much of a difference for one game. Brian Schmetzer has been his assistant since day one in Seattle and won't miss a beat.

There are a lot of question marks that make this game difficult to call, but the biggest one is not knowing whether the match even matters until minutes before kickoff. If Vancouver wins and Dallas' season is over, their intensity and focus will inevitably take a hit. If the Galaxy wins, Seattle will be under significant pressure to get three points of their own. If Vancouver wins and the Galaxy lose (the optimal results from the Sounders' perspective), you could see Seattle coast to a low-intensity 2-0 win. If Vancouver loses and Los Angeles wins, you could see bodies flying.