A quick look at Seattle and Los Angeles as they head into their final regular season match, which could have major implications for Seattle's CCL and MLS Cup hosting picture.

Last week, the Seattle Sounders secured a top 3 spot in the West and a playoff rematch with Real Salt Lake. This week — thanks to favorable results in the East — a win would secure the #3 overall position, which would give the Sounders better than even odds to return to the CONCACAF Champions League next season. It would also give them MLS Cup hosting rights against any team except Sporting Kansas City. And thanks to RSL's plodding 0-0 draw with the Vancouver Whitecaps, even a draw would earn the 2nd seed in the West and hosting rights for the second leg against the Lakers. Though that didn't help much last season, it does mean any overtime would be played in Seattle. So for a game with nothing to play for, there's quite a bit to play for.

The opponent is an enigmatic team that by last season's results and by talent should be one of the top teams in the league, but which for more than half the season looked like it wasn't going to make the playoffs at all. Those struggles were almost entirely to do with the defense, thanks to a long term loss to Omar Gonzalez. LA's 58 goals are second only to San Jose's 72, but their 47 goals allowed is worst among playoff teams. That bleeding ended with Gonzalez' return in midseason. In the first half of the season they only earned 2 shutouts. In the second half they have 6.

And one of the teams that has bedeviled their defense is Seattle. The Galaxy were a bugaboo team for the Sounders through their first few years, but this season it's been all Seattle, with a 4-0 home win and a 2-0 home win. Tonight represents their first match up in Carson this season, and an opportunity for LA to demonstrate that they can do something against Seattle before a potential playoff rematch in the second round (which, admittedly, would require LA to win two rounds, including one over San Jose, and Seattle to win one).

If they are going to get something against Seattle, they'll have to fight through injuries to do it. AJ DeLaGarza, the other half of their central defensive pairing, is definitely out, and superstars Landon Donovan and David Beckham are nursing injuries and unlikely to play the full match. The Galaxy have been back to giving up two goals a game since DeLaGarza's injury at the beginning of October.

Here's the average position map for their 2-2 draw against San Jose: 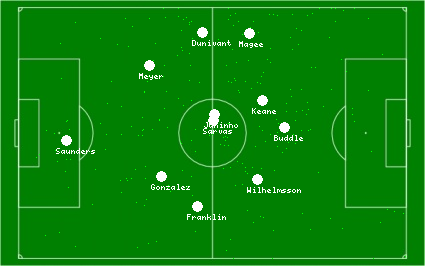 You can expect Donovan to slot in either at forward for Edson Buddle or on the wing for Mike Magee. I'd guess the wing as Bruce Arena likely wants to continue integrating Buddle into the attack for the playoffs. And Beckham would move somewhere into midfield, potentially for Sarvas in a deep central midfield position. It's notable that against San Jose the center backs were split so far out wide to provide support to the fullbacks. That can help control the wings, but it compromises the defenders ability to support each other in the center.

For all this game means to Seattle in jockeying for standings position, it means almost nothing to Los Angeles. They're not making the CCL without going to the final, and a win would give them hosting advantage only in a Cup final matchup with Houston, who have their own play-in round to navigate. So it's hard to imagine they'll take any risks when it comes to injuries. I wouldn't be surprised if either Beckham or Donovan or both were held off as subs to play 30 minutes or so.

Seattle is largely injury free among its starters. Leo Gonzalez could be out again with a hamstring injury, but he's in close to a platoon with Marc Burch anyway. Their questions are in weighing the desire to get a win and table position, the need to keep everyone in rhythm for the playoffs, and the hope that there are no pre-playoff injuries like the one that took Mauro Rosales out last season before the playoff series to RSL where he could have been instrumental.

Tactically, the major question is how LA can stop Seattle from scoring. They haven't managed it yet this season, even with a healthy Omar Gonzalez, and the loss of DeLaGarza won't help. Generally it's Gonzalez who rules the air and AJ who rules the ground, which is an argument for Seattle to focus on attacking on the ground through the middle, something that both Fredy Montero and Eddie Johnson excel at. Johnson has also proven he's dangerous in the air, via crosses from Rosales, but if Gonzalez is in the area that will be a challenge.

Against FC Dallas, Seattle showed that they have the ball control and passing skills to carve up a defense with short passes to find open shots, and that should be the route to success against the Galaxy. Especially if rookie Tommy Meyer is paired again with Gonzalez. Overloading the attacking middle will force the LA fullbacks and central midfielder Juninho to stay home in support, which will compromise the Galaxy attack.

At the other end, Robbie Keane is dangerous and Buddle has bedeviled Seattle in the past. It will demand a solid game from Jeff Parke and the masked man once known as Jhon Kennedy Hurtado to control them, but even more importantly Osvaldo Alonso has to be relied on to cut off service to the forwards. If Beckham is on the field, that service can come from 40 yards away, which is the responsibility of the Seattle wings and Christian Tiffert, but anything closer is Alonso's responsibility.

If Keane is starved of service, Donovan is controlled on the wings with defense in depth, and the LA fullbacks and midfield are pinned back to support the defense, Seattle has a very good chance to finish the season 3rd overall in the table, which brings an MLS Cup final hosted in Seattle tantalizingly close.