A tactical preview of the third match agains the Portland Timbers, and the one (again) that could determine the winner of the Cascadia Cup.

Share All sharing options for: Scouting Report: Defending the Cup

This scouting report can and will be brief. This is the third time the Seattle Sounders have faced the Portland Timbers this season and the most recent was only three weeks ago, so there are unlikely to be any surprises. The only roster twist in this one is that Seattle will be facing a team with more injury problems than the Sounders have, which is a novelty. Seattle is not only injury free in its first and second string, but is returning a fresh Eddie Johnson from suspension for yellow card accumulation. That plus the fact that both Fredy Montero and Osvaldo Alonso managed to avoid picking up their own yellow cards in Vancouver that would have triggered suspension — and the fact that our next match isn't for 10 days — means Seattle has no reason not to put its best 11 on the field.

Portland will be without the most expensive substitute in the league in Kris Boyd, who's out with a groin pull. But he's been out of the first team plans since Caleb Porter took over the roster from Ohio. More importantly, Kalif Alhassan and Hanyer Mosquera are also injured. Combined with the potential returns of Donovan Ricketts and Diego Chara from injury it's likely that the starting lineup in Seattle will be an overhaul from the one that started their most recent match against DC United. Here's the average position map for the starters in that match: 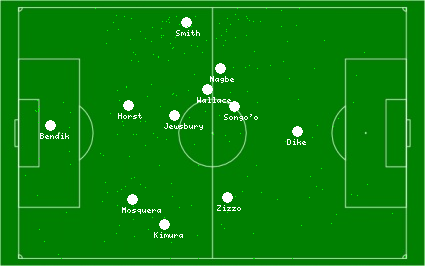 It's typical of the new-look Timbers, with Bright Dike playing target man between Darlington Nagbe and Sal Zizzo on the wings, in front of a trio of more central midfielders. I suspect when it was drawn up the idea was that Dike would hold the ball up and open space to create chances for Nagbe, Zizzo, Frank Songo'o, and other late-running midfielders. But in practice Dike has largely become the Timbers offense. Since August 31, Portland has scored 6 goals and Dike has 3 of them, including a tremendous roof-shot over Bill Hamid to earn a draw against United. His performances have pushed Danny Mwanga to the bench alonside a glut of other mismatched attackers in Boyd (when healthy), Mike Fucito, and Brent Richards.

In defense, the loss of Mosquera probably means a David Horst/Futty Danso pairing in the center. That's a combination that's particularly strong in the air and if Seattle continues to rely entirely on aerial crosses into the box to generate offense, it may be difficult to find chances.

Kosuke Kimura continues to hold down right back. He's recovered somewhat from a beginning to his Timbers career that could fairly be called a disaster, but he's still a weak link that could be exploited by an aggressive left winger. If Seattle starts Steve Zakuani at left wing, you can image that for all his defensive shortcomings he'd be able to skin Kimura at least a few times to create opportunities.

All season we've seen that the Sounders struggle to generate offense without Mauro Rosales on the field, but last week we saw that even with Rosales Seattle can struggle to create chances without Eddie Johnson on the field. It's dangerous to be so dependent on two players to create chances, and Seattle's struggles are particularly pronounced against teams willing to bunker in.

That brings up the most important aspect of this game. Not the potential sellout of CenturyLink or the fight for second place in the standings, but the defense of the Cascadia Cup. Thanks to that disappointing outcome in Vancouver, now Portland only needs a draw to win the Cup. So to whatever extend you'd expect conservative play from the Timbers on the road, you can double that expectation when a draw will win hardware. And that will introduce problems for Seattle.

That is, I think, another argument for playing Zakuani. As an attacker he defies Seattle's default style of getting the ball to Rosales for him to lump it into the center of the box hoping Johnson wins the header or a rebound falls to Montero. He attacks seams on the ground and forces defenders to stack two deep to deal with his speed, which can force panicky movement in defense and open up holes for Montero and Johnson.

In defense, Seattle has all the necessary tools to deal with Dike, Nagbe, and Zizzo, though execution isn't always perfect and it only takes one mistake to upset the cart. Adam Johansson has been particularly defensively shaky of late (although it seems like the right back is always identified as the defensive weak link in MLS. Maybe it's just a hard position to play). You can expect Nagbe to attack that flank when the Timbers break on the counter.

But Michael Gspurning is one of the best keepers in MLS, Osvaldo Alonso is the best midfield destroyer in the league, and Jeff Parke and Patrick Ianni are a fine and familiar pair of central defenders. The best defense in the Western Conference should be able to hold Portland to a lucky goal at most (or a generously referee-provided penalty). And so the defense of the Cup comes down to Seattle's ability to score a couple of goals in front of 67,000 fans.

I like those odds. Of course, then the Whitecaps have to do their part. If not, you could see the spectacle of a Seattle representative handing the Cup to a Portland representative on Vancouver's pitch, which would be fully Cascadian but pretty sad. But still better than it happening on our pitch.