LA's fourth place finish meant that they played an extra match when compared to the Sounders. Seattle will have one day less rest. What could that mean for Leg One of the Western Conference Finals?

Share All sharing options for: Pushing Pace Against LA Galaxy

The LA Galaxy are an old team. There three stars make it readily apparent - Beckham, Keane and Donovan. They will be playing their 5th in 14 days. A simple look at the upcoming Western Conference Final Leg One would be that the younger Seattle Sounders should push the pace of play.

This is only partially true. Bruce Arena knows he has older players in his squad. Most of them aren't expected to run much. Looking at ESPNFC's average position map you see a team that is fairly stable in shape. 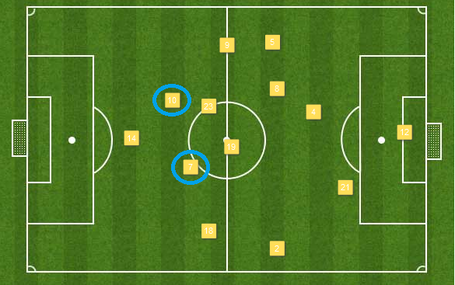 There are some important difference between their map and the one's sidereal uses. This is for the full match and so interchanges are more frequently included. This map also includes subs. Lastly it uses white on yellow for the numbers. The blue circles highlight Landon Donovan and Robbie Keane. Two older players who by APM look to be both playing as withdrawn forwards. Both move around quite a bit.

How they move will affect what Sigi can do to change the tactics of the Seattle Sounders to maximize the tired legs of the Galaxy. 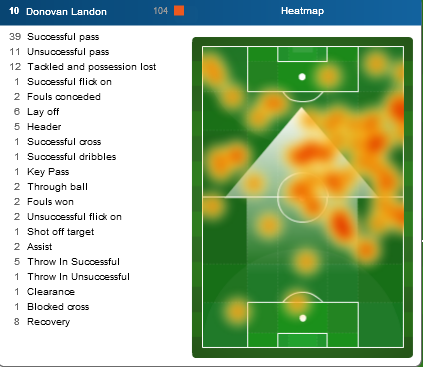 Landon Donovan's heat map from the Galaxy's win over San Jose shows that he was quite active. He was in fact the most active of LA's players. While activity does not directly translate to distance traveled in this case it can be an adequate symbol of that. Donovan was on the right that day, as he has been for three of the past four matches.

His work rate is part of what makes the Galaxy successful. Off the ball he moves well and his passing with the ball are one of the ways that LA pushes the pace of play (measured by shots+shots against) to one of the higher levels in MLS. Seattle can exploit his relatively tired legs by using young players like Mario Martinez (23) or Steve Zakuani (24) out left. This is likely anyway due to Rosales being day-to-day, but more left sided play can push the 30-year-old American a bit past his comfort zone. 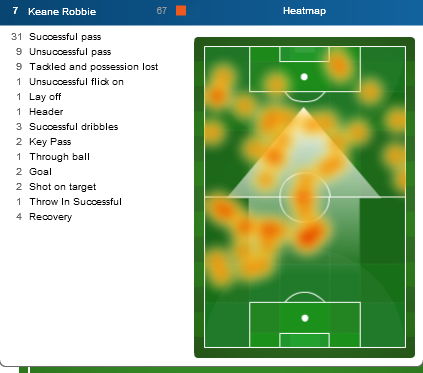 The Irish star is older (32), but is used differently. Similar to Montero he will drop back to harass a slow to pass defensive mid. Like Espindola he drifts to odd places, rather than sprints. He will be all over the place, but in a way that conserves energy. Between his role and familiarity with the game the chances that Seattle can exploit is legs is low. It would require a significant change in tactics by Sigi and would also count on Keane being baited into something he does not need to do.

There's also David Beckham. He does not move much. His heatmap is like a comet streaking from the right flank and reaching maximum brightness just on the Galaxy side of the center circle. In his 2012 role more as a deep lying playmaker. He can sit back, tackle hard and simulate a set-play with his great distance passing springing a counter. While the oldest he's also the least likely to be tired, though he is prone to back issues. Late in the season he does not go 90 minutes.

But, if Seattle pushes too much they will play into the Galaxy's game. LA's Plan A is bunker and counter. With that tactic they still manage a high pace to the match. For the most part this is not because of the speed of their players, but because they use passes to capture space. If the Sounders push their errors result in success for Arena.

Pushing Landon could be prevented if he plays up top with Keane. This tactic was effective in 2012. But also resulted in Beckham out right. If that happens Seattle should flood the side and force those tired legs to work.

Seattle Sounders FC will be on shorter rest for the one match, but their youth and one less match played in the two weeks gives them a bit of an advantage. To maximize this they will need to force Donovan and Beckham to work hard defensively while maintaining possession to prevent the counter strike.

Galaxy vs. Sounders, Leg 1: Picking up the pieces