It's hard to criticize Sigi Schmid. Over the decade + as an MLS coach he has proven himself to be one of the two or three best coaches in the league's history. The other two in the conversation both coached the US National Team. But there were some things that went wrong with the Sounders on Sunday and learnings from that performance must be carried forward into Leg Two. There is also little doubt that they will.

Share All sharing options for: Sounders Tactics Responsible For Loss Not Talent Differences

It was not just a three-nil loss. It was an experimental lineup with several players in new or slightly adjusted roles that worked towards different goals than the Seattle Sounders FC often use. There were some things that worked. In fact Sigi's goal of winning the central third worked. But there are a few reasons that strategy would not and did not win.

Most people who pay attention to soccer analytics already know this. It is a general rule. Now, Sigi's stated goal was to use that possession in a defensive manner. What was used was not a traditional bunker, but a 4231 that had the maximum number of possession based players on the field. It also had the top three midfielders when judged by their defense. Osvaldo Alonso, Brad Evans and Christian Tiffert won the ball and won it mightily. The duels won stat (an stat that does have a relationship to victory) was in Seattle's favor by far (59-40 - rounding).

But when a team has the quality long range service of one David Beckham play of the central midfield can be skipped. He is a master at bypassing layers. His service was supplemented by Sean Franklin so despite the Sounders holding a 56-44 possession edge the LA Galaxy dominated where it mattered.

Possession in the Final Third does

While Arena's team had 21% of their possession in the final third, Sigi's only had 13% of their possession there. That possession meant that the team from SoCal took eight shots from within the penalty area. Seattle only had two. The advantage existed at any point in the match. Both net passing and net shots in side the 18 are stats that relate to winning (see sidereal's Crunchy Power Rankings). Here's a secret - the LA Galaxy finished the year as the second best team via CPR. Seattle was seventh. Seattle held a tiny edge in duels. LA held a larger edge in net shots on goal and net passing in the final third. They did that in this match, just as the numbers say.

Fredy Montero is not a lone striker

Montero is good. He can work magic, but too many of Seattle's crosses were to places where Fredy Montero was not. They were searching for the other forward and the central mids were not making the runs to make those crosses effective. Montero was regularly swarmed and lacked an outlet. His turnover (incomplete passes plus tackled for possession lost) rate was not the worst on the team, but it also was not up to his standards at 12 of 53 actions. It is hard for him to be magical with so few effective touches.

Inserting Caskey as a possession mid abandoned the left channels

With Zach Scott at left back it was already likely that the Sounders would get little support on the left. With Alex Caskey being expected to help win the central third possession it meant that the Sounders were unable to attack up the left at their normal rate. Admittedly that is their least likely route to goal, but to nearly give it up entirely was a mistake, particularly when Franklin, Beckham and Wilhelmsson would abandon that defensive zone. 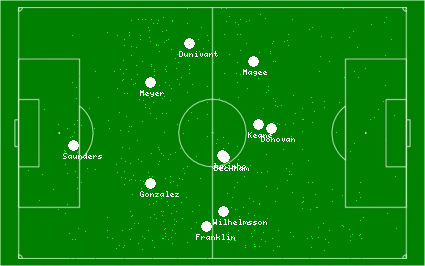 You can see the empty left rather easily. It is even more apparent that Seattle didn't go there with launches or throughballs when looking at the Sounders average position map. 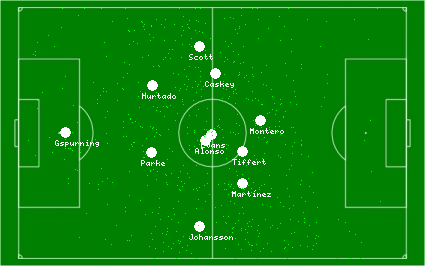 Not only was Alex Caskey not often in that space Seattle didn't have a second striker to drift over there as they often do. Pass attempts from the area emptied by Franklin were few and far between. The flood the right side technique was used heavily, but it meant that fewer defenders were needed because so many Sounders were in a tight space and so the crosses were even less effective.

Many of these problems are easily fixed by Sunday

First the Sounders will be in better health. Eddie Johnson, Mauro Rosales and Leo Gonzalez should all be healthy and able to play. That puts Seattle back into their standard shape and tactical system. That system is one that scores goals at a decent rate, is better defensively and able to take to to LA even with their stars.

From the weekly team notes;

Last Sunday's match marked the 10th time that Seattle conceded three or more goals in a game, five of which came in the 2010 season. Sounders FC allowed three or more goals just once this season. In the match following three-plus goals conceded, Seattle has kept a clean sheet twice and allowed one goal five times.

It will also mean a return of either Evans or Tiffert to the left. That will improve the defense against Beckham and limit his effectiveness and slow down the counter of the Galaxy. If it is Evans on the left his dangerous runs down the flank will find some room. If it is Tiffert that burden will lie with Eddie and Fredy.

With these adjustments Seattle will still likely win the central third and duels, but more importantly they can hold their own and possibly even succeed both on offense and defense in the final third. The loss was not a matter of quality of players, it was a tactical gamble that failed. The lessons for victory are right there. Seattle Sounders FC can beat and has beaten the LA Galaxy. All that's left is the future.

Sometimes your heroes lose their armor, their shield and their broad sword. It's time to find that other weapon, the rock for a bit of protection. It is time for legends. The three headed beast must die.

Galaxy vs. Sounders, Leg 1: Picking up the pieces