The Sounders will set a non-MLS Cup finals record for tickets sold to a playoff game and could even crack the Top 5 all time.

Win or lose a record crowd will be on hand Sunday to see the Seattle Sounders attempt to claw their way out of a 3-0 aggregate-goal hole in the second leg of the Western Conference finals against the LA Galaxy. Sounders GM Adrian Hanauer told Nos Audietis that more than 40,000 tickets had already been sold for the game, which would make it the highest attended non-MLS Cup final in playoff history.

With the Sounders continuing to open up sections as demand warrants, there's even the possibility that this game could break into the Top 5 all-time for playoff games. To get there, close to 45,000 would have to be in attendance.

"I'm obviously extremely frustrated because ticket sales would have been more brisk [if not for last Sunday's trouncing]," Hanauer said. "On the flip side, fans have a chance to come out to see an epic comeback."

Currently, the team has started selling tickets in the 300 level on both the west and east sides of the stadium. Tickets can be purchased through Sounder at Heart for as cheap as $18 or on TicketMaster. 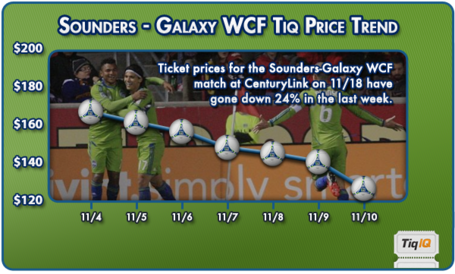