Seattle put four goals up on LA back in August and had twenty-six attempts against Salt Lake in similar circumstances as this season.

Share All sharing options for: Sounders Path To Victory Over LA Galaxy

The Seattle Sounders need to win by four goals on Sunday night. In August against the Galaxy they scored four goals. In 2011, needing four goals against Salt Lake the Sounders put up an impressive 26 attempts to score. Can we learn anything from those two matches about how the Rave Green should play?

That 2011 attempted comeback featured a barrage of action. Seattle dominated play in every way that mattered. It was one of their better performances. RSL sat back and did their best to absorb the pressure. It was against the performance of Rimando that helped Salt Lake. He was aided by nine blocked shots.

Josh Saunders saved 69% of shots on goal this year. His career number is slightly better at 70%. If Seattle have half the blocks that they did in 2011 and the same amount on goal, they will give themselves a chance.

Getting to that chance is the hard part. For all of the chance creation of 2011 the LA Galaxy are unlikely to sit quite as far back and have more effective counter-attacking players. That four-nil win saw Seattle with 14 attempts, but only nine chances. Some of this comes down to how chances are defined, and others because some one scored a freak goal that stats don't really understand - Alex Caskey's chip.

The Sounders need at least one of those goals of the supernatural.

One should also look at how those chances were created. 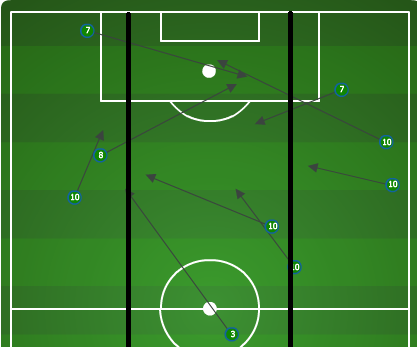 Seattle used a variety of attacking options to threaten the Galaxy. It was not their typical right leaning attack and it certainly wasn't crosses. In fact only two were crosses and there was a throughball! That's the other key - variety.

Those two matches - LA in August of 2012 and RSL Leg Two 2011 - were two of the best performances that the Sounders have put forward against MLS competition. It was a dominance built through variety, through individual dynamism, through Rosales in a wandering role and defenses that shut down some of the best players in the league.

Narratives can be fun. We tend to like a little creative non-fiction in these parts. You know what else we'd like? Twenty or so chances created and finishing. Because that's where Seattle lacks. In the 2012 MLS Cup Playoffs the Rave Green have 5 Big Chances (more than 50% chance of scoring) and zero goals from them. That barrage here last year had only two with one finished.

Yes, it is cliche. Seattle will need it all. Cliche, magic and the type of dominance they've shown themselves capable of having.