Every year US Soccer reviews the various Academies scattered around the nation. This year, with tighter grading criteria, the Sounders are in the middle of the "pro" Academy pack.

Seattle Sounders FC's second full season operating in the USSDA earned them decent, but not great grades. When compared to the other MLS sides and the handful of other pro soccer teams that operate Academies they are in the middle of the pack. The 2011/12 evaluations released show areas where Seattle needs to improve and what they are doing well.

Teams are rated on their application of US Soccer's youth coaching guidelines, the standards of the facilities used, the financial support offered by the operator towards the youths and proper maintaining of records. Last year, the Sounders were also just off the leading edge of the various MLS Academies. While some of the standards and rating categories have changed, the overall goal of the program is to develop professional soccer players. 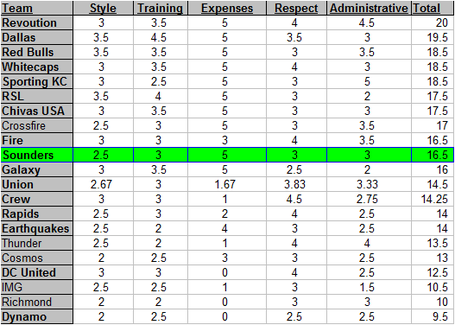 That chart also includes two well known Academies that are not directly attached to an American pro club -- Crossfire here locally and IMG down in Bradenton. Most notable on the chart is that Seattle is one of 10.5 teams given full grades in regards to how they relieve the financial burden for the athletes and their families. That .5 is because the Chicago Fire have their own Academy and an affiliate. One is fully funded (their own) and the affiliate is not. Philadelphia and Columbus also have multiple Academies under their umbrella. All three are listed as the average of the two or three under their umbrella.

Style of Play is described as "Overall grade based on scouting by USSF Technical Staff during 2011-2012 season for 15/16 & 17/18 age group teams evaluated in the following areas: Offensive, Quick Transition & Finishing, Defending, Tactics (playing out from the back), Technical, Physical, Psychosocial"

Training is "Based on evaluations of the following areas that contribute to the overall quality of the training environment: Attendance, Coaching, Translation to Matches, Planning, Logs, Competitiveness and Intensity"

Expenses is a rating to represent "The goal of the Academy is to move away from pay to play models and eliminate all fees for players who participate in the Academy program."

Respect is "The RESPECT Campaign was launched in May 2010 by U.S. Soccer to improve the level of professionalism throughout the Development Academy program."

Administration is "Based on the clubs ability to fulfill the administrative responsibilities required by Academy clubs, including scheduling, marketing, registration, web site maintenance, communication and attendance at required Academy events"

Clearly, the most important of those short term would be Style of Play and Training while the others are more vital for long term success. It is intriguing that the best rated MLS Academy is the New England Revolution, while the second worst is D.C. United. If the evaluations were based solely on players produced United would almost certainly be the best. These evaluations are meant for long term development of talent and not based on the luck of having great players within an Academy's system.