If there's one thing that is most surprising tactically from Seattle Sounders FC's first leg win over Santos Laguna, it is that David Estrada played quite high. We know this from sidereal's average position maps. His average space was similar to the space of a target forward. This does not mean he was a target forward. While he used his speed both offensively and defensively in ways similar to what Mike Fucito would, his body type isn't the such that you saw much of him with his back to the goal, holding the ball up for runners. When in the past this site has referred to Seattle's formation as Sigi's Arrow, it has been a bit of a hybrid between a 4-4-2 and a 4-2-3-1. Last Wednesday that hybrid was even more a 4-2-3-1. Or even a 4-2-3\-1 with the right side of the attacking midfield band playing higher on the right. Considering the weakness along Santos' left and Mauro Rosales being one of Seattle's best players, that shouldn't surprise many.

Sigi Schmid's side managed to control the midfield for the most part. With both central midfielders playing generally deeper, Alvaro Fernandez folding centrally and Fredy Montero dropping deep, Seattle had the passing lanes available to itself. With strong (for MLS and now it seems CCL) defensive central players like Osvaldo Alonso and Brad Evans, this allowed the Sounders to surge one of the two forward, mixing up assignments for Santos Laguna while leaving one back to protect the counter. That central hexagon also showed flexibility, because any of the six are capable of occupying that space to switch the to the other side or to provide the final pass -- as Montero did on the goal. 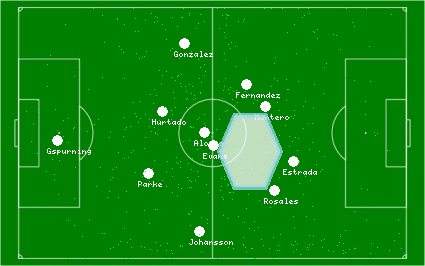 But there are spaces and opportunities left available to Sigi and the Sounders for leg two.

The first and most obvious is probably that Adam Johansson has an opportunity to get forward and serve more crosses into the area. Yes, Seattle is unlikely to play a big body. That does not matter. Seattle showed in leg one that they have enough size and aerial skill to win headers and score goals. When Eddie Johnson comes on this will be even easier. Scoring one goal changes the match dynamics quite a bit. 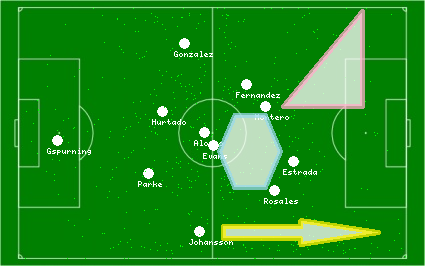 That red triangle offers other opportunities. Any of the six players in that hexagon can pop up there. As Santos Laguna cheats right due to the assymetrical nature of Seattle's attack, a quick switch can open a one-on-one or two-on-one situation. There's also the threat of the back-post header, or as Sounders fans know it, "the Fernandez." Santos Laguna will adjust to what Seattle did in leg one, but there are at least two Sounders specific attacks left open to get that Away Goal in Torreon, Mexico Wednesday night.