Viewing Party A Tribute To This Community

Share All sharing options for: Viewing Party A Tribute To This Community

Let's ignore that result for a bit. Instead, let's focus on a party that had a name that proved a bit wrong, but so much else went right. Hundreds of you turned out to celebrate Seattle Sounders FC's run in the CONCACAF Champions League. A manual count of the event shows that there were exactly 311 people. A manual count by Dave is not assumed to be accurate. Each and every writer, editor, photographer, podcaster extends our warmest thanks to those of you who chose our viewing party as their venue. We know that you have choices and greatly appreciate the one you made.

This list is partial, based on Dave's memory (let's remember he counted 311 while Jorge from Golazo says 350-400 people) and could never be complete any way because it's not like we took roll call. Thank you to a few of my closest friends from ECS, including my favorite capo. A thank you and a welcome to La Barra Fuerza (ECS new Hispanic subgroup) who joined us for some all ages action. Kind words are sent out to Kyle, Brendan, Brendan, Adam, Erin, Likkit, Crass, James and so many other twitter personalities who we saw for the first, second, etc time in real life. Huge thanks to Michael, Paul, Kevin, Ryan, Rachel, Jason, Sarah, Melina and those we've seen at other events. It was great to see so many children as well, those young Sounders are so often ignored by viewing parties and they brought much joy to a game that didn't have much. 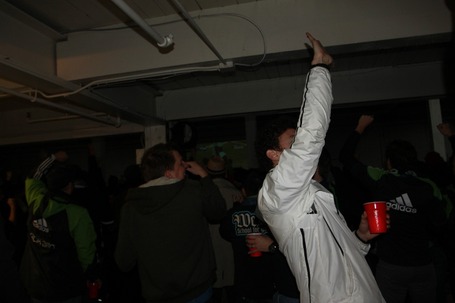 Thanks as well to the handful of Sounders FC current and former employees who showed up, to include U18 Academy player Justin Solomon. There was also a surprise appearance by a Wexley School for Girls employee (I'm nearly certain they have their own unique word) who was quite clear, they are fans and marketers.

An event that reached that scope needed a lot of partners as well. Golazo was kind enough to let us use their space and provided non-alcoholic beverages. Big Al's Brewery donated three kegs of Brougham Bitter so that we could raise money (at least $1100, but there's still funds trickling in) for Kingdom Hope. They are hosting a coaching clinic on March 25th. It was great to have TacoGol right outside the doors for some food as well.

But all of those partnerships wouldn't mean much without this community of writers, readers and followers. As always, it is you that make this all worth doing. Each of us, our families and our closest friends know that you are what makes this community more than just a website, blog or whatever. Each of you, whether named or not, is a Sounder in Sport, a Sounder in Life.

Last night you were heard.

PS - Jeremiah will be at Temple Billiards in the basement at 4PM prior to the Saturday game to distribute and/or sell scarves that are so far unclaimed. Dave will join him as soon as the Alliance Council meeting is done.

PPS - We'll have more photos up over at www.facebook.com/SounderAtHeart over the next day or two.