Toronto FC is a bit of an enigma. Every other Don Garber expansion team with more than a year in MLS has a playoff appearance, Real Salt Lake even won a title. The pressure is mounting for the team that launched MLS 3.0. With a fans that are still strongly supporting a side with a poor history the team needed to do some things to awake and become what their supporters feel they deserve.

That lead to the Aron Winter project, dramatic expansion of their Academy system, trading DeRo and signing two new Designated Players (Danny Koevermans and Torsten Frings). TFC of the second half of 2011 is not the TFC you think it is. Instead TFC became a team that looks to be capable of snagging an MLS Cup Playoff spot in the East and clearly can hang with the best in the league after they beat the LA Galaxy.

First Kick for the Seattle Sounders will not be a relaxing opener. Instead it features a Seattle side that is trying rebound from a rough loss and a Toronto team ready to prove itself. Duncan Fletcher from Waking the Red answer three questions to preview the St. Patrick's Day opener.

WtR: It's very much still a work in progress, and it will continue to be until they can find 2 good Centre Backs. Chilean Miguel Aceval looks OK, but the other big off season CB acquisition Ecuadorian Geovanny Caicedo left the club "by mutual consent" after barely even playing in preseason. So now we're back to hoping Adrian Cann can be back to full fitness and his 2010 form soon. Until then, it's Ty Harden as first choice Centre Back, which generally means Aron Winter's the one who has to adapt, with Torsten Frings pushed back to the middle of a 5-4-1/3-4-3 formation.

As well as bolstering the backline, it enables the full backs Ashtone Morgan and Richard Eckersley to get forward very aggressively in support of the wingers, allowing the wingers to cut inside and attack the goal with Morgan and Eckersley on the outside to put crosses in. It does leave TFC undermanned in central midfield, needing support from the wingers when defending, and the full backs when attacking, which doesn't always work out perfectly. The 4-3-3 would definitely still be Winter's first choice, but we won't see it regularly until there's finally a reliable CB partnership.

One piece of the 4-3-3 puzzle that looks to have been improved is the Attacking Midfield spot. Maicon Santos was an unqualified failure there, and in the second half of 2011, Eric Avila and Ryan Johnson split time there, Avila providing the more skilled passing game, but Johnson providing more of a direct threat to goal. 4th overall Super Draft pick Luis Silva looks to be a very good combination of the two. It's still early, but he has linked very well with the forwards in the preseason and CCL games we've seen so far, as well as showing off a lethal goalscoring touch. 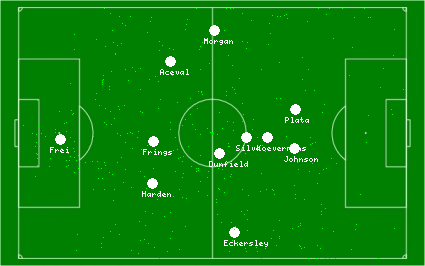 via Sidereal from CCL Leg One

SaH: Which DP will have a bigger impact on 2012 TFC success?

WtR: Until very recently I would have said Danny Koevermans as his goal scoring exploits were crucial last year, but so far we've actually seen signs of TFC developing reliable secondary scoring. Joao Plata, Ryan Johnson and Luis Silva all look capable of chipping in with plenty of goals, so while Koevermans will be very important up front, his goals don't seem as irreplaceable as they did to me earlier. That's a good thing, as he really hasn't got going yet so far this season, looking like he's not quite fully fit. That brings us to Torsten Frings, and any doubts about his age maybe catching up to him, or his influence starting to wane were blown away in the 2 games against L.A. Played in the middle of the 3 Centre Backs, he put in an immense performance in the first leg, winning battles in the air, calming all around him, and controlling TFC's attempts to pass the ball out of the back. The second leg saw more of the same. I'd prefer to see him in midfield, but wherever he plays, he should be just as influential as he was in 2011, which is a very good thing.

SaH: How will playing a second road game in four days effect the lineup? Projected lineup?

WtR: Probably not much. Even late last year, amid the two games a week every week craziness that was the CCL group stage, Aron Winter really didn't rotate the squad that much. that may have been down to a lack of options, and while things have improved there, there's still plenty of positions that would have a significant drop-off. Also, there's a week off before the next game, and we're only a week into the season, so they shouldn't be that tired, though the plastic pitch might mean some people get rested.

As for a projected lineup. I think Milos Kocic has played himself into the number 1 spot for now, and there's very few reliable alternatives in defence so I'd bet on the same back 5 there as well. Julian de Guzman should keep his midfield spot, and though I'm a lot less certain about this, I'd guess Luis Silva at AM as he's impressed while Eric Avila was suspended in the CCL. Up front it comes down to whether Danny Koevermans is fit and ready to play on turf. If so, Ryan Johnson and Nick Soolsma showed themselves worthy of a first team spot so they'll be on the wings. If Koevermans can't go, move Johnson to Centre Forward, with Joao Plata coming in on the left. I'll guess the following. Kocic; Eckersley, Harden, Frings, Aceval, Morgan; de Guzman, Silva; Soolsma, Koevermans, Johnson

WtR: Seattle obviously took the CCL seriously, and equally obviously they like the USOC. Will they be going all out in all competitions again, and what are the expectations they can do it well?

SaH: The Sounders will never have the problem of not taking a tournament seriously. They will have the problem of not being good enough once in a while, like maybe Wednesday. But, ownership is quite clear. They want an MLS Cup or CCL Trophy bad. The team is generally deep with players like Christian Sivebaek, Patrick Ianni and some decent forwards who could start on other teams. With Marc Burch, Servando Carrasco and Zach Scott they also have some role-players who can help win limited matches in a season.

Generally fans expect a deeper run in the MLS Cup Playoffs, at least an appearance in the US Open Cup Final and another qualification for the CONCACAF Champions League. Are those expectations high? Probably, but it's actually just a small improvement over 2011. Adrian Hanauer and Sigi Schmid already improved the team over the first three years in MLS, so expecting it to be repeated is not a huge stretch.

WtR: Quick prediction: Eddie Johnson - Success or failure this year? and just how important is the answer to that question for the Sounders' season?

SaH: Quickly, I'm not excited. Not only is he carrying a second injury of his short Sounders career I think he's prone to peaks and valleys. In 2004 and 2007 he was amazing. In the other years he was either injured or a bit poor. The good news is that Seattle with a mishmash of forwards in 2012 was still the best offense in the league, so what EJ does probably doesn't matter. Unless he's great. If he's great, Seattle's offense is as good as the LA Galaxy, which shouldn't worry you a bit since he won't be playing Saturday.

WtR: So, erm, 6-1, ahem. Are TFC now in line for some serious blowback from that game, or will it be put aside and business as usual for this game? Any info you can give about what to do, or not to do against Santos Laguna?

SaH: In past years after pathetic performances the Sounders have started long winning streaks. Good news for TFC fans is that doesn't always start the very next game. This team is hungry and felt they were capable of more than they showed in Torreon on Wednesday night. Seattle is a bit prone to the counter so we may see a 3-2 type match.

Santos will turn a blown chance into a scoring opportunity in just a few seconds. Step one is finish. Step two is don't push numbers forward, as that counter is so potent. Seattle seemed to be a man short defensively, so don't do that. I'll be in the MLS4TFC camp now, so don't suck as bad as Seattle did. Although if you do at least I can say the Sounders aren't horrid.

Yeah, I hate his last question too.

Reminder: Jeremiah will be in Temple Billiard's basement at 4PM on Saturday to finish distributing scarves. Dave will join him as soon as his Alliance Council meeting with team ownership is done.