This weekend we prepare for the last echoes of MLS First Kick 2012 as both the Seattle Sounders and Toronto FC take the field for the first time in MLS play. But that doesn't mean these teams will be mysteries. Both have played a two-legged CONCACAF Champions League series, which in the Sounders' case showcased both the best and worst of a dynamic, attacking team that in the end didn't have enough defensive presence to stymie a Mexican juggernaut; and in Toronto's case showcased a rapidly improving team that has combined enough talent, experience, and tactical comfort to go toe-to-toe with, and defeat, the league champions.

If there was a Most Improved Team award in MLS, Toronto would be the runaway preseason favorites (though their Canadian rivals in Vancouver would probably pick up a few votes). They've failed to make the playoffs in every year of their existence, which is quite an accomplishment given the high level of parity in MLS and the generous number of playoff slots awarded. And on the surface last season wouldn't engender much optimism, as the Reds finished only above the Vancouver Whitecaps and New England Revolution in the standings and ended the season with fewer points than they had in 2010. But that obscures the fact that they lost only 4 of their final 19 matches of the season — a stretch that included league wins over Real Salt Lake and the Colorado Rapids and a Champions League victory over FC Dallas that opened the door to their elimination round matchup with the LA Galaxy. The series victory over the Galaxy continues their tremendous momentum into 2012 and maintains hope — or at this point, maybe even an expectation — among Toronto fans that the roster overhaul of last season and the continuation of the Aron Winter project will finally lead to consistent MLS success.

The foundation of that success is built in large part around the feet of veteran German international Torsten Frings. Unlike most aging European stars, Frings wasn't brought in to lead the attack and eke a few more highlight reel goals out of aging legs. He was brought in to help stabilize a defensive midfield foundation and the move seems to have at least stanched the bleeding. Toronto gave up at least 3 goals 8 times through the first week of August, but only did so twice in the final three months of the season (including once to Pumas in Mexico, which it hardly seems fair to even count). That early season stretch included a 6-2 loss to the Philadelphia Union and a 5-0 loss to the Red Bulls, but with Frings established in the side they can hope that the days of such blowouts are over. 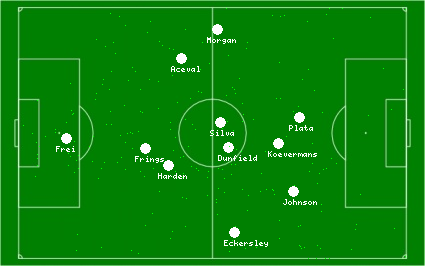 Toronto's defensive problems are certainly not completely solved. The midfield is stabilized, but the back line is not. The offseason acquisition of center back Geovanny Caicedo was undone when the Ecuadorian evidently changed his mind about playing in MLS and left the team in March. Winter has apparently responded by moving to a 5 player backline to help compensate. As you can see from this average team formation from the first half of the first leg of their CCL matchup with LA (Opta didn't provide events for the second leg in LA), Torsten Frings was not only playing as a center back, he was playing behind the nominal back line in a sweeper role, which is something you don't see much in the modern game. This gave the fullbacks the freedom to move forward to support the attack without compromising the defensive third.

All in all it was a pretty familiar 5-3-2, though it was common to hear it described as a 4-3-3. This is largely a result of people thinking of Frings as a midfielder and forcing him into a midfield band even though the evidence shows he was effectively on the back line.

As is typical in a 5-3-2 the loss of a central midfielder is made up for by the two 'wide' midfielders actually playing quite centrally thanks to the support from the fullbacks on the sidelines. The real loss is in width in the attack, and you can see that the potent attacking triumvirate of Ryan Johnson, Joao Plata, and Danny Koevermans were stationed centrally. Plata and Johnson are nominally wingers, but they're not the sort of winger getting chalk on their boots running into the corner to make crosses and playing the overlapping run game with their fullbacks. They cut in early and often. Toronto scored three goals in the run of play in their 4-3 aggregate victory over the Galaxy (their first goal was off of a corner). The first two were carbon copies of each other, as a Toronto defender punted in an entry cross from about the halfway line on the right side and an attacker (in the first case Johnson and in the second Luis Silva) headed the cross in from near the left post. The 4th goal was a run by Johnson into the left side of the box that was centered for Nick Soolsma to blast in from in front of goal. And it was a pattern that was consistent in their attacking chances throughout the series. The crosses come from midfield, not from the deep wings, and the attacking moves were straight up the gut.

One reason that you don't see the 5-3-2 much at the top level of modern soccer is that the game has largely evolved to single striker formations, and matching up three central defenders against one opposing forward is an over-commitment of resources that likely means that some other area of the defense is compromised. But teams across MLS are still much more comfortable with the 4-4-2 and similar dual striker formations. That was certainly the case for the Galaxy, who played Robbie Keane and Edson Buddle as a forward pairing. But is that a good matchup with the Sounders? We ostensibly play two forwards, but Fredy Montero often plays as more of an attacking midfielder, withdrawing away from the box to pick up the ball and advance with it or push it out to the wings. A typical 3-man central defense would leave three players marking David Estrada and Fredy roaming freely in the defensive midfield, which seems like an awful allocations of resources.

Another downside of the 5-3-2 is that the central focus of the midfield and attack can leave the opposing fullbacks unmolested for deep runs down the sidelines. The Sounders made it clear that getting more offense from the fullbacks was one of their offseason tactical adjustments, seen most clearly in the acquisition of Adam Johansson on the right, but also the depth addition of Marc Burch on the left. If those players (and we expect Burch to play over Gonzalez this weekend for a number of reasons) are ignored while the Toronto fullbacks focus on Mauro Rosales, Alvaro Fernandez, and Christian Sivebaek, they could spend all game dropping dangerous crosses into the box. For those reasons I'd expect Toronto to shift back to a 4-man defense with Frings in a defensive midfield role occupying Montero's space and pushing the other midfielders out wider to help deal with the overlapping fullbacks.

Offensively, Toronto seems to have little to worry about. Ryan Johnson was, I think, one of the more underappreciated attackers in the league. An awful 2010 season on a bad San Jose team overshadowed an 11-goal season in 2009 and some statistical work we were doing suggested that maybe he was more a victim of bad luck than anything. His 2011 season turned out not to be a whole lot better and he was moved to Toronto in mid season. But in the CCL series he looked like a force against the Galaxy and he joins explosive newcomer Joao Plata who was voted Toronto's player of the year for 2011. Oh, and the best of the bunch is Dutch DP Danny Koevermans, who scored 8 goals in 10 appearances for Toronto last season.

The Sounders will be eagerly looking forward to this game despite it being only 3 days after the previous one, since it'll be a quick opportunity to focus on something other than their shellacking at the hands of Santos Laguna. But the quick turnaround combined with a very underwhelming performance from the defense (even taking into account the quality of the opposition) means we're likely to see some player rotation. Leo Gonzalez and Jhon Kennedy Hurtado seem like the two most likely to get a day off based on merit from the last match, as the left side of the defense was consistently torched long into the Mexican night. That would likely mean Patrick Ianni and Marc Burch. Alvaro Fernandez didn't particularly embarrass himself versus Santos, but Christian Sivebaek has consistently performed well when he's played and the short turnaround might be a good excuse to give him some playing time on the left wing. Servando Carrasco has also been a name that's come in conversations as a chance to give Brad Evans a break and clog up the central defensive midfield against Toronto's largely central attack.

Seattle fans should absolutely not expect a game against a typical moribund Toronto side. They might be a bit fatigued from their Wednesday match, but otherwise this is a team that is likely to end the season as a significant contender in the Eastern Conference and with the seeming fall of Philadelphia and continued issues in New York may well end up the best team in the East and one of the top 5 or 6 in the league.