Here in the upper left coast the nitpicky who is ranked 12th v who is 13th probably doesn't matter much. The Seattle Sounders are unlikely to dip that far down. In fact the vote range for the Sounders in the SB Nation Soccer MLS Power Rankings, Week 2 is from first to sixth. Real Salt Lake is now the clear number one according to the broad list of voters across SB Nation, only garnering two votes for third. While the LA Galaxy garner a vote for 8th (no, not the same voter as last week), the bulk of their rankings are in second and third.

Locally, writers for Sounder at Heart split their votes for Seattle. Two gave their home side first place, the other two put the Sounders in second. Of other local interest is that the other Cascadia sides aren't awful. Both the Portland Timbers (now 8th with range from 5-11) and the Vancouver Whitecaps (10th range from 6-17) are charging up the charts. 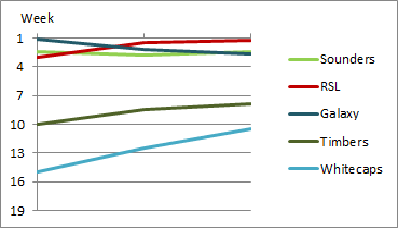 It is notable that the bottom of the rankings are expanding with four sides receiving votes as the worst team in Major League Soccer -- Philadelphia Union, Chivas USA, Montreal Impact and the New England Revolution. If the SBN rankings determined the playoffs, then FC Dallas and the Colorado Rapids would join the consensus top three from the West. The East would be Sporting Kansas City, Houston Dynamo, Chicago Fire, New York Red Bulls and Toronto FC (ranked at 12th).

Peter Nowak's side is a disaster as he is telling players that they aren't healthy enough to play, while not putting them on the injury report.