Share All sharing options for: Sounders FC vs Houston Dynamo Scouting Report: Danger From the East

You've probably read a hundred times by now that the MLS Western Conference is 9-2 versus the East so far this season. It's been less remarked that the two wins are by the Houston Dynamo and that Houston is a pretty tenuous Eastern Conference team. They're the westernmost team in the conference, are only a few miles east of the Western Conference's FC Dallas and they were in the West up until last season, when the MLS head office made the perverse decision to 'balance' the conferences by giving them an equal number of teams for exactly one season before the addition of Montreal unbalanced it again in favor of the East. And given that there's a strong likelihood that Team 20 will be in the East (with the most likely destinations being New York and Orlando), they're just going to have to ship a team back, which you'd expect to be Houston again. But regardless, Houston is at least temporarily an Eastern Conference team, and given that they're not completely awful, that makes them the pride of the East.

It's also a team with some significant connections to the Seattle Sounders, both good and band. Dave detailed them in the 3 questions post so I won't belabor the point. But suffice it to say that Houston is a team that's very comfortable playing and winning games against (and in) Seattle. Last season Houston was the only team to score 3 goals on Seattle in MLS play (up until the Sounders visited Real Salt Lake in the playoffs).

If they do win this Friday, the edge will likely come from Brad Davis' delivery and the veritable forest of tall players that can take up space in the Seattle defense. Houston likely has the tallest team in the league and Davis has pinpoint accuracy on both set-piece and run-of-play deliveries that has him routinely compared to David Beckham. Both of Houston's lauded victories against the West were narrow 1-0 wins, but those equal results came from very different games. In the first match it was only Chivas USA's keeper Dan Kennedy who kept the game from becoming a blowout by stopping a number of good Dynamo chances and staring a few more into ringing off the posts. In Houston's second match the roles were reversed as Tally Hall had a memorable game in goal to help the Dynamo's PK goal hold up for the win.

However, despite those consecutive showings of dangerous offense and stout defense, the silver lining for Seattle is that Houston isn't much of a counterattacking team. If Seattle has had one consistent Achilles' Heel in their short history in MLS, it's that their aggressive offense has left them open to the counter. Corey Ashe, who isn't projected to start, is their only legitimately fast player. They play big/big up top with the veteran Brian Ching alongside target man Will Bruin. Davis is a great distributor but isn't much of a burner. One of their faster midfield players — Geoff Cameron — was moved to the backline this season. That means that Seattle may have a chance to be more aggressive in the run of play — pushing the fullbacks up the pitch and letting Brad Evans drift further into the offensive third — than they would be against a faster team. 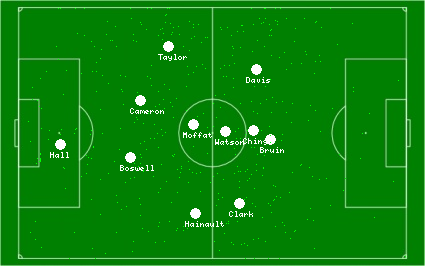 As you can see from the average position map versus San Jose, Houston is largely a centrally focused team. Adam Moffat, Je-Vaughn Watson, Ching, and Bruin won't really line up in a nice straight line like that — it's just an average — but it does show that there are definite responsibilities along the spine. Moffat plays a little back as a holder and in the forward tandem it's Ching playing behind Bruin (and yes, it's a little perverse seeing Brian Ching play as the more withdrawn forward). Clark and Davis both cut in frequently and in fact on defense you'll see the entire team shift laterally as much as I've ever seen in the pro game. That gives them great defensive depth on the side with the ball, but it can leave the opposite flank wide open for players who can make long, switching balls across the midfield, which is one of many things that Osvaldo Alonso excels at.

The Houston roster is likely to stay largely the same, but Seattle will be facing some decisions. Right-back Adam Johansson has picked up a hamstring injury in training and will likely be out. Mauro Rosales is certainly out after yet another knee injury suffered to inept MLS defenders. Jeff Parke and Leo Gonzalez are available to return after a game off. I'm expecting Man Marker Zach Scott to slot into the right back to match Houston's height and help control Davis and Christian Sivebaek to provide height and speed in the right wing. Any two of our three starting-quality center backs should be fine (their problems have generally come on the ground, not in the air).

How Houston Wins: Ching and Bruin combine to power in Davis crosses and set piece deliveries. Moffat takes a few dangerous shots from distance. And the Cameron-led backline stays stout enough in front of Hall to secure their third consecutive away win against the West

How Seattle Wins: The Sounders run the Houston midfield ragged with switching balls and fast attacks up the flanks with some lethal finishing from the top of the box. Davis is suffocated for space all match and the Seattle backline maintains air superiority in the defensive end.