I'm writing this post just a few miles away from Buck Shaw Stadium, home of the San Jose Earthquakes. Have I traveled down to the Bay Area to scout the Earthquakes first hand? To watch their practices with an eagle eye hoping to decipher tendencies that may surface in their upcoming match with the Seattle Sounders? No, actually I'm just here on a business trip. But you don't need to scout the team firsthand or haunt the halls of Buck Shaw to know that the Earthquakes revolve around Chris Wondolowski.

One thing that all of those other strikers have in common is that they don't care if the defenders know where they are. In fact, they probably like defenders knowing where they are. I'm sure it's all the more satisfying to blow by a defender or bowl one over or break another one's ankles with a stepover if the defender's watching it the whole time. But Wondo's game is built on not being seen. He's a ghost.

Watch any attacking drive by San Jose, you'll see Wondolowski in open space. If such a stat were tracked, I'm confident he'd lead the league in uncontested shots on goal. That seems perverse. Surely professional defenders aren't so inept that they'd leave an occasional Golden Boot winner unmarked. But Wondolowski makes himself unmarkable. He's an escape artist. Even good defenders can't just stare at their mark all the time. They need to see where the ball is, where the other threats are, where the rest of their back line is. Wondolowski can sense that lack of attention, and the very moment that a defender looks for the ball or a teammate, he's gone into dangerous open field.

He also finds space on the counter by not being fast. He's content to let the first wave of attack — usually Steven Lenhart plus one or more wingers — soak up the defensive line while he jogs behind. As a defender you can hardly ignore the threats running into the middle of your box, and so you leave San Jose's best scoring threat to roam unmarked into open space. Just watch the highlights of the Earthquakes' game against Toronto FC last week to see Wondolowski repeatedly trail an attacking play enough to not pick up a marker and then drift into a wide open shot.

Of course he isn't San Jose's only threat. Lenhart is a bull of the Casey vintage and is good for a handful of headed goals a season. Simon Dawkins is a dangerous player off the wing. But if you can keep Wondolowski neutralized, San Jose becomes a very mediocre MLS team. 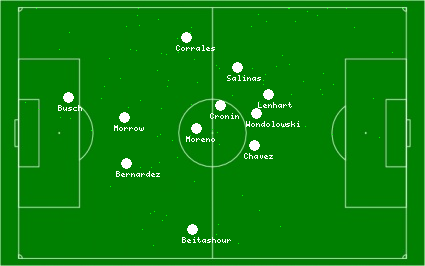 Against Toronto the San Jose squad was noticeably rotated counterclockwise. Right winger Marvin Chavez cut in enough that he was effectively playing as a forward (and was one of the players forcing the Toronto defense to take their eyes off of Wondolowski) and right back Steven Beitashour pushed higher up the pitch to fill that space. The central midfield responded to all of that central attacking space being eaten up by cutting wingers and a withdrawn forward by pulling back into nearly a dual defensive midfielder formation (sort of resembling the Bucket), especially later in the game when the Earthquakes were protecting a lead.

That's a combination that calls for dangerous wing play, since Beitashour and veteran Ramiro Corrales on the other side will have their hands full holding the flanks and the center will be clogged up with holding mids. Unfortunately, Mauro Rosales — the Sounder best equipped to exploit opportunities on the flank — will be out for another game with a knee injury. Last game's combination of Roger Levesque and Zach Scott on the right did a great job of holding Brad Davis in check, but they didn't provide much danger of their own. This might be a game to give Christian Sivebaek a shot to start on the right, or perhaps even Brad Evans with Servando Carrasco or Mike Seamon slotted into the central midfield.

Then again, Sigi seems loathe to change a roster that's won, so he'll likely be tempted to pencil in the same squad that beat the Houston Dynamo last weekend. That should still be plenty good enough to win, as long as the Sounders can pick up Wondolowski's late runs, keep him out of the game, and leave the Earthquakes operating as a defensive bunker plus Lenhart.