Seattle Sounders vs Colorado Rapids Scouting Report: Mullan It Over

Share All sharing options for: Seattle Sounders vs Colorado Rapids Scouting Report: Mullan It Over

Yes, I have to start out the scouting report talking about Brian Mullan, even though he's far from the most likely player to have a significant impact on the game. Sounders fans have been increasingly chided and cautioned over the last few weeks by the media as well as the organization to just leave the poor guy alone — cause garsh shucks bygones is bygones — to the point that if every fan doesn't give him a handshake and a wet kiss on the cheek, we've embarrassed the franchise. Clearly they want to avoid something really embarrassing, like objects being thrown at him or homophobic slurs being shouted (but not at the ball boys. That's only for the professionals). Where do they think we are? Toronto? Philadelphia? Brian Mullan is going to be booed, and our knowledgeable and enthusiastic fans don't need to be hand-held and taught just the right intonation and frequency of booing. We'll figure it out, thanks. And a heavily booed and saddened and agitated Brian Mullan will get out of the game otherwise unharmed and we'll have had our say and that'll be it.

In other news, the Colorado Rapids are a dramatically changed side from their previous incarnation under Gary Smith. Gone is the staid, English 4-4-2 complete with bruisers in the midfield and long crosses from the fullbacks into a mountainous target man. Now under Oscar Pareja the Rapids play a spicy, Latin 4-3-3 with endless short midfield passing before they spend their nights salsa dancing well into the dawn.

Yeah, maybe it's a little oversold. Team style is at least as much about personnel as about tactics, and this is largely the same Rapids roster that spent the last half decade playing Thugball. If anything, the continued loss of Conor Casey to an achilles tear (which he suffered in Seattle) has more to do with the Rapids not playing Route 1 soccer than any deep change in philosophy. Jeff "Kissyface" Larentowicz is still the same reducer good for a few red cards a season while taunting the crowd. Moving Mullan from right mid to 'wing forward' or whatever doesn't make him not be Brian Mullan. Drew Moor is still Drew Moor. Tyrone Marshall is awesome (because Sounders), but he's not there to play with the ball at his feet.

The jury's clearly still out on whether the transformation is working. The team has three wins out of five games this season, but two of them were over the Philadelphia Union and Columbus Crew — two teams very well positioned to not make the playoffs — and when they faced good teams they were blown out 4-1 by the New York Red Bulls and 2-0 by Real Salt Lake (The other result was a 2-0 home win over enigmatic Chicago, which is ambiguous). At the very least, the offense is balanced. Colorado's 7 goals this season have come from 6 different players. 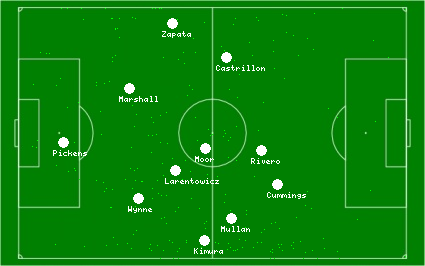 One thing to note about the "4-3-3" is that it's very right handed. Against RSL all three of the forward players played on the right side of the field, with Mullan clearly not enthused about this whole forward thing and effectively playing at his usual right mid position. Omar Cummings played as a right forward and Martin Rivero played centrally. And voila, a huge hole in the left side of the attack. That gave Jaime Castrillon plenty of room to run around, but doesn't create much threat on the left. Was that a specific adjustment to RSL? Here's the previous game, against Chicago: 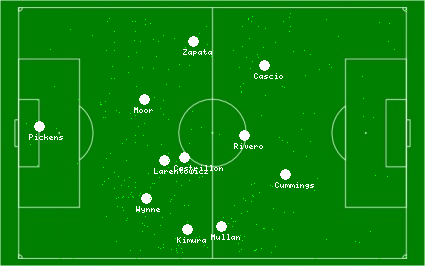 Some of the names have changed, but you see the same tendencies. Mullan pulled back and Cummings pulled right. If the Rapids continue to play that way on Saturday the Seattle right back should be pretty free to push forward into the attack. Unfortunately the word is that Adam Johansson, who is the perfect player to answer that call, is probably out for another week and instead we'll see Zach Scott, who's a solid defender, but is less likely to take advantage of that space. It also means on the left side that our fullback probably shouldn't be doing too much roaming with the threat of Mullan, Cummings preferring that flank, and Kosuke Kimura aggressively overlapping. That sounds like another job for Leo Gonzalez, who's the more defensively oriented member of our left back platoon.

The continued absence of Casey means that Colorado's attack comes largely via runs through the defense from Cummings and the midfielders, so playing a high line would probably be a bad idea. Especially with Scott in the game, Seattle should be able to control the airspace and not worry too much about high crosses. Osvaldo Alonso should be focused on cutting those midfield runs short, especially on the counterattack. If Alonso can sweep up the ground in front of the box and the air can be controlled by the Seattle back line, the Rapids should be effectively starved for scoring opportunities.

That shifts the focus to the Seattle attack. Colorado's been pretty solid defensively, but mostly against questionable teams. Marvell Wynne remains the fastest center back in the league, so those through balls and overlaps with Alvaro Fernandez and David Estrada on the left probably just aren't going to work, as Wynne will have plenty of time to recover and challenge shots. Tyrone Marshall on the other hand, is not fast, so cutting in from the right wing would potentially be dangerous, except Mauro Rosales is also likely out for another week. It may be another week to give the Christian Sivebaek experiement a try at right wing, though results so far have been mixed. He certainly has the speed to trouble Marshall and 31-year-old Colombian left back Luis Zapata in a way that Roger Levesque would not. And if Fredy Montero sticks to the right side of the field he could find space opened up by those runs.

So injuries on the right side are again compromising what should be a promising matchup, but Seattle has a talent advantage, a cohesion advantage, and a significant home field advantage that should add up to control of the game and, if we don't suffer too many bad bounces, a win.