Entertainment Value in The Big Apple

Share All sharing options for: Entertainment Value in The Big Apple

A team with aspirations will obviously want to combine a good offense with a good defense. Scoring lots of goals and not allowing many is a pretty reliable recipe for success. But for the neutral or a casual soccer fan, the best combination might be a good offense and a bad defense. That will drive up the goal totals, and as much as we want fans to become more educated about the game and learn to appreciate all aspects of play, there's no question that goal scoring is something everyone can enjoy.

And one team that's definitely learned how to produce goals this season — both offensively and defensively — is the New York Red Bulls. Thierry Henry seems to have finally settled in and found his groove in North America and the New York Kenny Cooper is exactly what the Timbers were hoping for last season and never got. Meanwhile the defense is a shambles, with the injury to Wilman Conde and the introduction of rookie goalkeeper Ryan Meara contributing to 10 goals allowed — tied for third worst in the league.

If you take total goals per game (scored plus allowed) as a proxy for entertainment value, then the Red Bulls are leading the league by a long shot. And you'd be forgiven for thinking there might be a conspiracy afoot, since the team in second is the LA Galaxy and the league would desperately want the teams in the two largest media markets to be the most entertaining for potential new fans.

Here's the full table of total goals per game as of Sunday afternoon: 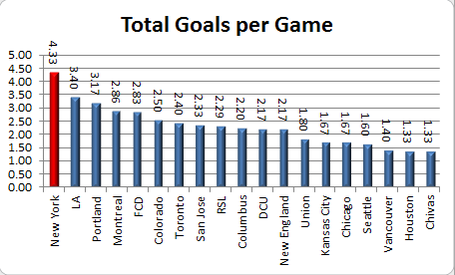 One thing to notice is that despite the competitiveness of the Red Bulls, you generally don't want to be on the left side of that chart. The Galaxy and the Portland Timbers are the next two and they're in the basement of the Western Conference. The Montreal Impact are next and they're the first team for which the total number of goals comes almost entirely from one side of the ledger. They've scored a decent 6 but have allowed 14. The first team other than the offensively unstoppable Red Bulls that's playing well is the San Jose Earthquakes in 8th.

Meanwhile the right side is a much more reliably solid group of teams. Chivas USA games might have the least interest for goal lovers (a stark contrast to their stadium-mates), but only allowing 4 goals in 6 games keeps them in the Western Conference playoff hunt. Houston isn't higher in the real standings because they've only played 3 games, but they're earning 2 points per game thanks in large part to giving up less than a goal a game. Of course you generally have to score some goals to win, so being on the extreme right probably isn't too healthy. Sporting Kansas City is pretty much the consensus #1 team in the league right now, and they're about 3/4 of the way over alongside the Seattle Sounders and Vancouver Whitecaps, who are also playing well.

But in the race to keep the fireworks flowing, no one can touch the Red Bulls, who are on the greatest pace of the modern era. The leader last season was D.C. United, who saw 101 total goals in 34 games for a 2.97 average and in 2010 the Houston Dynamo saw 89 goals in 30 games for the exact same 2.97 average — almost a goal and a half less per game than New York's output. Here's the full list of season leaders back to 2004, when the league abandoned the golden goal overtime to resolve ties:

So New York is on pace to break the previous record (held by the LA Galaxy in their last bad season) by almost a half a goal per game. It's interesting to note that New York makes three appearances in the 9-year list, twice as the MetroStars, and that the current record holders are the Galaxy who are also second this season. There might be a lesson there that teams in competitive big markets feel more pressure to put an entertaining product on the field, which often means prioritizing offensive talent at the expense of defensive depth.