Switching the Attack: The Chicago Fire

Share All sharing options for: Switching the Attack: The Chicago Fire 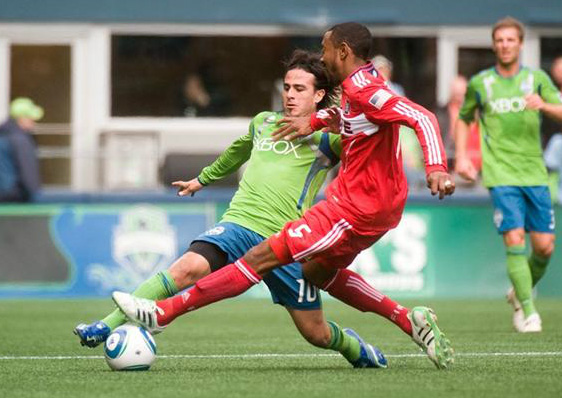 The Sounders travel to Chicago for a 5:30 PST kickoff against the Fire--a team the Sounders have never lost to in MLS play. In Chicago, Seattle will be facing a team that remains largely an enigma.

Although their record is decent after five matches (2-1-2), Chicago has benefited from the weakest schedule in MLS. In thirty-two games, Chicago's opponents have won eight, lost nineteen, and drawn five. In fact, if Chicago's opponents were added to the MLS table by points/game, they would be ranked seventeenth out of the nineteen MLS teams. Only expansion Montreal and woeful Toronto, two teams Chicago has had the good fortune to face, have lower points/game totals.

One of the culprits has been the offense as Chicago has been struggling to put the ball in the back of the net. Chicago has scored an average of 1.2 goals per game. While this is close to MLS average (1.29), they've had the luck of facing Canada's defensive disasters. Montreal and Toronto are both giving up more than two goals per game. If you were to eliminate the Toronto match, Chicago has just three goals in its four other games. 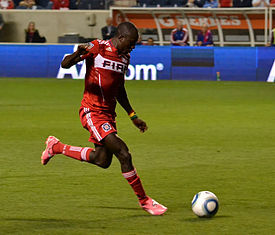 However, it is not all fire and brimstone for the Chicago attack. Even though Chicago's has struggled, Dominic Oduro has shown that he has arrived in MLS. After moving over from Houston in 2011, Oduro posted a break-out season notching twelve goals for the Fire. Continuing this trend in 2012, Oduro has finished three of Chicago's six goals. Never lacking in pace, Oduro may have finally found his shooting touch. If Oduro can continue to improve his Chemistry with Patrick Nyarko, Chicago could have one of the best counter-attacks in MLS play.

Chicago also bolstered its attack by adding veteran striker Chris Rolfe who returns to the club after leaving Chicago for Aalborg BK in 2009. Despite his European absence, Rolfe remains Chicago's second-leading scorer with 40 goals and 20 assists in 149 games. Originally slated to make his debut last week against Toronto, Rolfe was scratched after picking up an ankle knock in training. Still listed as questionable on the injury reports, it is unlikely that Rolfe will start on Saturday.

Not unlike the Chicago, the Sounders attack has been anemic of late. After starting the season strongly with five goals in its first two games, the Sounders have managed just one goal from its last three games. From recent training reports it appears that both Mauro Rosales and Adam Johansson are expected to be available for selection. While nobody has undersold Rosales' importance to the Sounders attack, Johansson provides a significant upgrade over Zach Scott in this regard.

There is no doubt that Scott is a good defender. Additionally, his aerial ability also provides a legitimate threat on set pieces. However, in three plus years of watching him, one thing has become apparent. Zach Scott is a complete liability when it comes to maintaining possession. Over the winter, the Sounders made a concerted effort to create an offense based on possession and solid build-up play from the back line. Zach Scott simply does not fit into this philosophy.

Johansson fits this mold very well. Although he needs to pick his spots going forward, he has already shown the ability to provide well-timed overlapping runs and deliver accurate crosses. Additionally, his passing game is miles ahead of Scott. Over four games started, Scott completed just 67% of his passes. Although based on a limited sample, Johansson completed 84% of his passes in the season opener.

Although Rosales and Johansson look set to return, Alvaro Fernandez and Patrick Ianni appear unlikely to play. The absence of Ianni will almost certainly mean a return for Hurtado. Although Flaco's absence is more difficult to project, I still expect Alex Caskey to get the nod after a solid if not spectacular performance against Colorado.

All things considered, I expect the Sounders to control the run of play and come away with three points. Anything less should be considered a failure for a team with Seattle's aspirations. With Rosales and Johansson returning to the lineup, the Sounders have fewer excuses for failing to score goals.