No team is as reliably almost-but-not-quite great as the Chicago Fire. After their MLS Cup winning expansion season in 1998 they made the playoffs in 10 of the next 11 seasons, but never won it again — a stretch that included 2 finals losses and a grueling 5-year run from 2005 to 2009 of losing in the conference finals 4 times. That might not seem like much of a sad-sack story to fans of Toronto FC — who have never made the playoffs — or fans of Chivas USA — who've never made it out of the first round in 7 years of trying — but there's a special agony for teams that look and feel like they've done everything to earn a spot at the top but keep coming up short. History does not remember the Buffalo Bills kindly.

Then again, after two years of not making the playoffs (including being the last team out in 2010 and the second to last out in 2011) a conference final loss might sound pretty attractive. Like many teams trying to recover past glory, they've turned to a coach that was around in the halcyon days. For Ben Olsen in D.C. United that tactic hasn't yet paid off, but the Fire turned to Frank Klopas, who scored the goal that won them the 1998 US Open Cup. Under Klopas the Fire won 7 of their final 10 games last season and have begun this season with only 1 loss in 5.

They've also just turned to Chris Rolfe, the onetime Fire mainstay at forward whose brief European adventure probably not coincidentally coincides with that two year run of Chicago not making the playoffs. Rolfe won't be starting this weekend, though that may actually be unfortunate for Seattle. New acquisitions, no matter how talented, often need some time to gel with a team and the Sounders could benefit from being the team he gets his gelling time against. Instead they'll likely be facing the speedy Oduro and Nyarko combination up top. 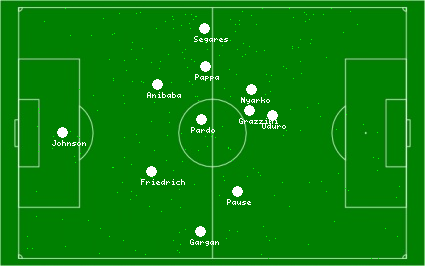 One thing to note about this average position map from the last Fire game against Toronto FC is how skewed toward the left the events are. This is partly because the players are drifting left and partly because the players on the left are getting more of the ball. In the Colorado map in the last game we saw that the team was skewed to the right largely because Omar Cummings and Tony Cascio drifted to the right and Brian Mullan pulled back in the midfield. Similarly for Chicago, Nyarko is playing largely as a left winger up and down the sideline, but there's no equivalent right winger. Oduro and Sebastian Grazzini are playing centrally. And the players on the left are getting the ball more. When Marco Pappa — the left side of the central midfield — subbed off in the 65th minute he had attempted 32 passes. His mirror on the right — Logan Pause — had attempted 21 in that same period.

If you take into account the fact that the Sounders will be without starting left winger Alvaro Fernandez (likely to be replaced by Alex Caskey or David Estrada) and will be welcoming back the threatening tandem of Mauro Rosales and Adam Johansson on the right, you'll likely see two teams that are happy running the ball along the same half of the field — Chicago's left and Seattle's right. That may make for an odd game in which Dan Gargan on the Chicago right and Leo Gonzalez or Marc Burch on the Seattle left have little defending to do. But Gargan will still be dangerous thanks to his throw ins, which are no doubt the longest in MLS.

If I had to name the Chicago formation based on the Toronto game, I'd have to call it a 4-3-2-1, the legendary Christmas Tree, which is reliant on a central trio of attackers. Tweed at Hot Time in Old Town calls it a 4-3-1-2. The difference comes down to whether you think Nyarko is playing up top with Oduro or in the hole with Grazzini. Actually, he's playing as a left winger, so.. neither? But regardless, the fulcrum of that triangle is Grazzini, who's starting to develop a decidedly Guillermo Barros Schelotto-like game as a midfield playmaker. Control of the Chicago attack will probably come down to whether Osvaldo Alonso can shut down his distribution.

If so, the Chicago attack is all about Oduro and Nyarko's speed and whatever Pappa drifts around to do. Playing a high line would probably be a bad idea and the lack of threat on the Fire right wing should encourage the Seattle left back to drift centrally to provide coverage. Johansson, or Zach Scott if the Swede doesn't start, will be on point to keep an eye on Pappa, who can show up anywhere from defensive midfield to target man.

At the other end we'll hope to see continued improvement from Eddie Johnson, who managed to stay healthy in the last match and ditched his record-threatening stepover pace of his first few appearances to provide some solid play in front of Fredy Montero. Better chemistry in the forward pairing can only mean good things for the Sounders attack and the return of service from Mauro Rosales should add a sorely needed dimension to the offense. Also, Montero is due. You are on notice, Fire.