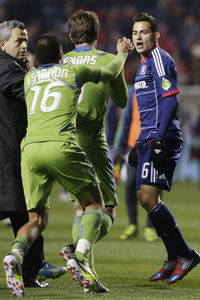 Despite the Sounder's sterling record against the Fire of Chicago, matches between the two teams have always had a good little spark there. (HAH.) That culminated last year with the US Open Cup, a thoroughly decisive win that upped the ante for all future matches.

The Sounders battled and came out of Bridgeview with what felt like a decisive victory. But tempers were running hot (AGAIN! I'm ON......FIRE!) and stoppage time of Saturday's "Battle in Chicago" (not the same ring to it) resulted in a number of... let's call them incidents for now. There's a lot of he-said she-said going on, and it's a little tough to know what's true and what's the Timbers Army influence (ever going to live that down? Probably not).

I think that's everything, though I could be wrong. The cards that were given were mostly warranted, though another for those tackles on Rosales would have been nice. Too bad more people didn't see it in person. I mean, I always figured wind in Chicago was like rain in Seattle; not something that would keep fans away from the game. Then again, if both my winter teams were out of the playoffs (let's face it, the Bulls aren't going anywhere without Rose) I'd probably want to stay home too.

*as always, this post was made in jest, and doesn't contain any content worth getting offended and/or butthurt about. If you take offense to anything written here or plan on making blanket conclusions about my green-wearing compatriots, kindly write it on a hundred dollar bill and sent to *address redacted by The Offside*.