Seattle Sounders vs DC United Scouting Report: My God It's Full of Stars

Share All sharing options for: Seattle Sounders vs DC United Scouting Report: My God It's Full of Stars

What exactly to make of D.C. United's 4-1 dismantling of FC Dallas on national TV last week? Was it a sign that Ben Olsen's rebuilding project in DC is complete? Is it a sign that FC Dallas has suddenly plummeted from its perch as a Western Conference contender? Or is it just another sign of parity in a 2012 season that's already seen the Seattle Sounders, LA Galaxy, and Real Salt Lake lose at home to teams that didn't make the playoffs in 2011?

DC is certainly hoping for the former and a chance to add to a collection of stars over their crest that they'll never stop going on about, but which are so dusty that the last was won when teams called the Dallas Burn and the Metrostars roamed the countryside. And the one before that was earned in part by a playoff victory over the Miami Fusion. Remember them? But there's more evidence for the latter two explanations. Parity is certainly high this season, and FC Dallas just barely eked out their second win of the season with a last second goal over a questionable New England Revolution side.

Regardless, if DC United does find success this weekend and through the rest of the year, it'll be more through offense than defense. United hasn't had a shutout victory since September 10th of last season over Chivas USA — a run of 14 matches. I only did a brief check, but I suspect only Toronto FC even comes close to that active run. Putting in rookie Perry Kitchen for the occasionally solid Clyde Simms at holding midfielder in front of a thin defensive line didn't lead to a lot of defensive success last season and it remains to be seen whether a year of experience will improve matters. 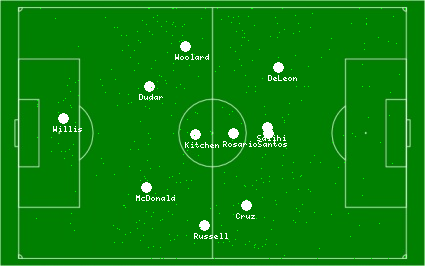 Offensively, there's a lot more there to impress, even with the loss of Charlie Davies to an inviting bench in France. Dwayne De Rosario was wearing a DC United jersey when his game of Musical Franchises came to an end last season and he's been stellar ever since. Maicon Santos joined the team as a free agent after FC Dallas declined his rights and has looked dangerous this season. And rookie Nick DeLeon certainly impressed with an assist and a beautiful tight angle goal against FC Dallas. But for all that, they had only scored 1 goal in their previous 3 games this season, and that was a late DeLeon consolation goal after they'd already gone down 3-0 in Los Angeles. So I suspect that a great win over FC Dallas might be obscuring the fact that this team has a long ways to go yet.

The Sounders will customarily be without about half an MLS roster's worth of talent this weekend. Steve Zakuani is still of course way out and Mauro Rosales is still suffering from the latest in a series of knee injuries that's plagued him ever since. . hey, Daniel Woolard of DC United. Remember him? I do. I bet the Sounders players do, too. Adam Johansson, Eddie Johnson, and Jhon Kennedy Hurtado are closer possibilities. Hurtado has a good backup in place, but either or both of Johansson and Johnson would help upgrade an offense that's been a bit moribund since the opening week's Estradical Estraplosion. And Brad Evans should be available again in the middle.

The 4-diamond-2 that DC United plays is typically a narrow formation and the United side midfielders are heavily involved in the attack, which should open up opportunities on the flanks. Unfortunately, Rosales being out limits the danger on the right, so the best route to a Seattle goal is some interplay between Fredy Montero and Alvaro Fernandez on the left. And there should be some openings in the box for Montero and David Estrada if Seattle can keep possession in the offensive end.

At the other end, Osvaldo Alonso will be well placed to help control De Rosario. With the speed of Davies gone across the pond, the fullbacks shouldn't be as exposed as they were the last time Seattle traveled to DC and United scored two carbon copy goals on breakaways.

DC United is dangerous, but even in an away game and with the litany of injuries, Seattle should be favored here. A win would get the season back on track after the hiccup against San Jose. A loss would increase pressure to get Rosales (and a healthy Eddie Johnson) back into the squad as soon as possible.