Seattle Sounders vs LA Galaxy Scouting Report: The Case of the Missing Eurostars

Share All sharing options for: Seattle Sounders vs LA Galaxy Scouting Report: The Case of the Missing Eurostars

Last season we remarked that the LA Galaxy were very much a team built to win in the short term. They had one of the oldest rosters in the league and the key players on the team did not look like they were planning on sticking around. Landon Donovan had proven himself in short stints in Europe and gave off the clear impression that he'd like to move his career to the EPL while he was still young enough to put some years into it. David Beckham was at the end of his much analyzed contract and was getting strong overtures from Europe during his many loan stints there. And Robbie Keane — the man they brought in to replace Edson Buddle — had played for 5 different teams in the span of 2 years and hardly looked like a player who wanted to settle into MLS long term.

And as the lights turned off on the 2011 season both ends of that prediction were looking good. The Galaxy had in fact won in the short term, earning their third MLS Cup and fourth Supporters Shield. And the team did begin to disassemble. Juninho, a crucial piece of their midfield, returned to Brazil. Donovan again suited up for Everton. Donovan Ricketts was sold to Montreal. Keane was loaned to Aston Villa. Beckham to PSG was all but a done deal.

But somewhere along the way the Galaxy decided that had one more one-more-year in them, and so Juninho was loaned back from Sao Paulo, the Beckham move to Ligue 1 fell through, and the Galaxy's European loan trio were recalled for another campaign. Unfortunately for them, Omar Gonzalez — a player who might be more important to the Galaxy on the field than any of the others — tore an ACL during his own trip to Europe and LA began the season with a woeful defense that allowed 11 goals in their first 5 games across CCL and MLS play — a stretch that included CCL elimination to Toronto FC and 3 losses in 4 MLS matches. A run of 4 consecutive games of giving up 1 goal is a greatly improved average, but they still have yet to earn a shutout this season.

This match kicks off a dense schedule for the Sounders which is expected to challenge their depth. But at least for this week the midweek game may be as much of a boon as a challenge. The Galaxy have opted to keep $8.5 million in salary at home as Beckham and Keane will be kept away from CenturyLink Field's ominous turf. As will Josh Saunders, who's away from the team to deal with a substance abuse problem (which I won't make light of). Meanwhile Mauro Rosales and Adam Johansson should continue their comebacks from injury and if Eddie Johnson starts his chemistry with the rest of the team will only improve. So we may (hopefully) see the best Sounders team of the season face the weakest Galaxy team of the season. 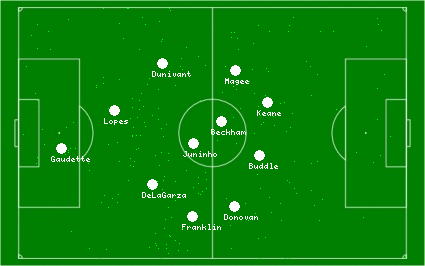 Obviously this average position map from their match with FC Dallas isn't completely applicable, since Beckham and Keane won't be in town. Nevertheless it reveals a textbook 4-4-2, with Donovan and Mike Magee on the wings, Beckham and Juninho in the middle, and Keane and Buddle up top. Without Keane, we could see Magee move up top, or perhaps Chad Barrett or even ex-Sounder Pat Noonan, who scored the game tying goal for the Galaxy in the final seconds of their last match. Any of those pairing might be a relief to Buddle, who hasn't done much yet this season paired up with Keane.

Without Beckham in the middle and especially if Magee moves up top, the midfield gets thin. Michael Stephens is next on the roster in midfield minutes with not many. For that reason it seems more likely Magee stays on the wing. Regardless, the main threats are Donovan and Buddle and the long range shooting ability of Juninho. That's a bit of a throwback to the Galaxy of recent years (especially when Beckham was hurt), but that might be OK with Bruce Arena and crew, since the Galaxy of recent years have had Seattle's number. We're certainly hoping that a return to Seattle doesn't inspire Buddle to make any shots like the one he scored against Seattle in the 2010 MLS playoffs. Or Juninho to make any shots like . . well, every game really.

If the Seattle back line can keep Buddle under control (assuming he doesn't just keep himself under control as he's done all season) and provide enough help to the fullbacks to negate the threat of the speedy Donovan, Osvaldo Alonso should be free to stick to Juninho and run rampant when we gain possession.

At the Seattle offensive end, I think it's unlikely we'll be the first team LA shuts out this season. Rosales should be back in sync with the team and even if Alvaro Fernandez isn't yet ready to return the left wing is in capable hands with David Estrada. Johnson is rounding into form and Fredy Montero, despite the fact that he has yet to score in MLS play this season, is one of the best forwards in the league. Put that group up against an unsolidified backline and a replacement keeper and we should see plenty of chances created.

And if we can avoid enough bad luck we should have a decent shot to record our first win against the Galaxy in league play.