Switching the Attack: The LA Galaxy

Share All sharing options for: Switching the Attack: The LA Galaxy 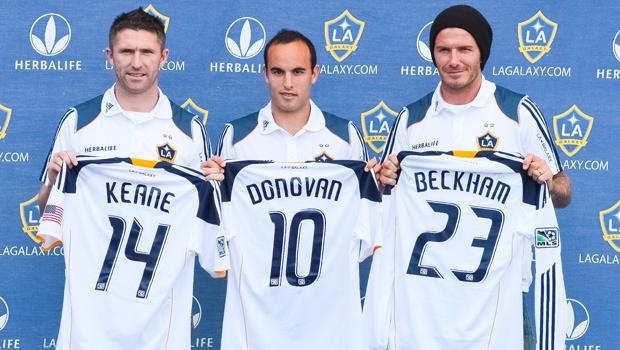 In a continuing trend, the Galaxy appear reluctant to bring their high-priced foreign talent to Seattle for a midweek fixture. Last year saw David Beckham remain in Los Angeles for an U.S. Open Cup tilt. This year both Beckham and Robbie Keane remained behind as the Galaxy boarded their plane for the Emerald City.

Keane and Beckham, along with Landon Donovan, are the cutting edge of the Galaxy attack. The trio currently leads the Galaxy in goals, assists, and shots on goal. With two-thirds of this attack sitting back in Los Angeles, expect the Galaxy to come to Seattle with a conservative game plan. In a scene that is becoming all too familiar to Sounders fans, the Galaxy will likely park the bus in front of goal and look to steal a goal on the counter.

Fortunately, Seattle may have caught another break as starting Galaxy goalkeeper Josh Saunders is also set to miss this match. Saunders appears to have been enrolled in an MLS substance abuse treatment program. If Sharlie Joseph's history with the program is any indication, Saunders will likely miss at least a few more games as well. While substance abuse is certainly nothing to jest about, the Sounders must take any advantage that falls their way.

Moving to the home team, expect the Sounders to field a team much closer to full-strength. Even so, there are still several large question marks on the eve of the match. First and foremost will be the health of Mauro Rosales and Alvaro Fernandez. While Rosales is recovering from the another assault by a MLS defender, Fernandez is hoping to return from a strained quad. However, because Fernandez remains doubtful, it appears that Rosales is the more likely of the two to see significant time on the field. If both of these players are absent, the Sounders will be hard pressed to break down a committed defense.

Additionally, it will be interesting to see who Sigi starts at right back. While Adam Johansson would be the obvious pick if you were looking to break down a defensive shell, Johansson himself is just returning from an injury. After starting and playing 90+ minutes in Chicago this past weekend, Sigi may be tempted to play Zach Scott. As I've noted before, Scott has a solid defensive skillset, but his inability to efficiently pass the ball is a clear liability. If available, Johansson's ability to get forward and provide dangerous crosses may be valuable to breaking a bunkered defense.

The Sounders record now stands at 4-1-1 after their match in Chicago. Although this club-best start to the season provides the Sounders with some breathing room, they cannot afford to drop any of these points. The Galaxy have left two of the best players in MLS at home. It is not often that the Sounders will get such a gift. There can be no excuses for failing to capitalizing on it.