The Seattle Sounders are very rarely embarrassed in a match. Sure, they occasionally lose. Every team loses games (though you might have forgotten that during the current run of wins). But it's not often that after a match the team and fans know that the team wasn't good enough to compete that day. In fact, it's happened 4 times. In 2010, they lost 4-0 at home to the Los Angeles Galaxy in the middle of an awful first half of that season. The fans were issued a refund. In 2011, they lost 7-0 to Manchester United in a friendly. There's some dispute as to whether this was really embarrassing at all, given that it was an exhibition game and the worst part came when our C team was playing against Wayne Rooney. But the front office was clearly unhappy with it, as were many fans. And this season the team lost 6-1 in their second leg match against Santos Laguna, a result tempered by the fact that most of it came at the end when the match was already over and the fact that Santos is and should be a lot better than any MLS team.

But arguably the worst of all of them was last season's first round playoff match in Sandy, Utah, when the team needed to go into a difficult environment, play disciplined soccer, and get out with a tie or a 1-goal deficit they could make up under the impetus of 36,000 fans at home. Instead they finished the leg down by three goals, and a solid 2-0 effort at home wasn't enough to prevent the 3rd consecutive first round playoff loss. This will be the first meeting between the teams since that series and I'm confident the desire to balance the books will give more meaning to this game than your usual first half weekend match. And the fact that it's a match between the two top teams in the standings adds a little something as well.

RSL gets a lot of 'second favorite team' votes around the league, in large part because they've been consistently good over the last 5 years. But also because there's a perception that the organization does things the right way. They don't spend a bunch of money on high profile Eurostar DP signings. Instead they use depth and balance. They play attacking, pass-oriented soccer. And Jason Kreis is a charismatic, stand-up coach. Though that reputation was certainly tarnished last season when Alvaro Saborio was suspended for a blatant dive in the box (only a week after Kreis ranted about Charlie Davies doing the same thing) and Kyle Beckerman was suspended for three games for head butting an opponent.

This season has started off well for them, with only 3 losses in their 12 games so far, but they're coming off a disappointing scoreless draw in Chicago on Wednesday. And Seattle's torrid start means the Sounders could take the top of the table with 3 games in hand with a win this weekend.

Tactically, they're very consistent. And why not? It's worked so far. They play a 4-diamond-2 with Beckerman in the holding midfield role, Javier Morales as the playmaker, and Savorio paired up top with Fabian Espindola. But as the average position map from the Chicago game shows, it's not entirely that simple. 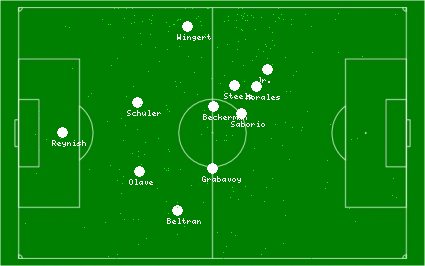 In that game it was Paulo Jr taking Espindola's place at forward and drifting out wide left. In fact the entire team was drifting left as Morales was also pushing into the left wing area, so much that he was actually further forward on average than Saborio. If that continues to be true on Saturday, then the right back and midfield (presumably Mauro Rosales and Adam Johansson) will have to be more conscious of defensive duty, while Marc Burch on the left may be free to move further forward.

As of writing the Friday MLS injury report hadn't come out, but if there aren't any additional injuries since Wednesday, then Seattle should be in good shape. Rosales and Fredy Montero both played only a half on Wednesday (with Fredy's half being a little more memorable), and Johansson, Burch (edit: by whom I mean Leo Gonzalez, of course. They're interchangeable!), and Osvaldo Alonso all had the game off. Add that to the indications that Alvaro Fernandez will be available and we may finally (for reals this time) see the intended pre-Zakuani offensive lineup. And only Michael Gspurning's absence would keep us from seeing the entire 11-man intended starting lineup.

RSL's only injury of significance was to keeper Nick Rimando. We don't know if he'll be suiting up tomorrow, but Kyle Reynish was a capable backup on Wednesday. On the other hand, they played most of their starting roster on Wednesday, while Seattle got away with about a B+ team over the course of the match, so the fatigue factor is probably in Seattle's favor despite this grueling stretch of games every 3 days for weeks.

Seattle has proven that they can beat this team, whether it's at home or breaking their record undefeated streak in Sandy. But we didn't beat them in the most important matchup, and it'll take a lot of wins to excise that wound. Tomorrow is a chance for a good start at it.