Switching the Attack: the Vancouver Whitecaps

Share All sharing options for: Switching the Attack: the Vancouver Whitecaps 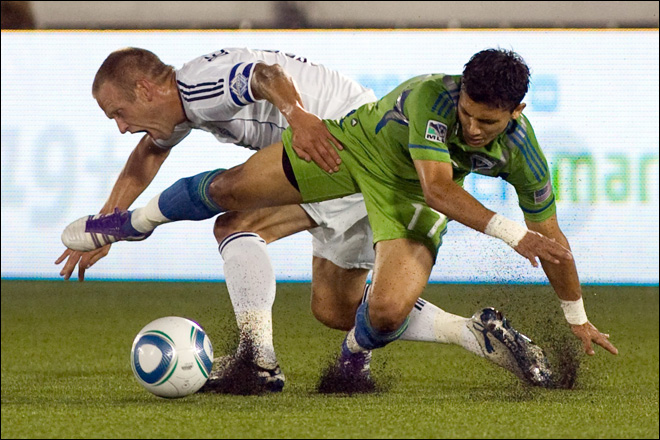 The Sounders lost their second game of the 2012 season last weekend against Real Salt Lake. Although they no longer sit atop the power rankings, the sky did not fall and they are still leading the table in points per match. But now it's all eyes forward to first edition of the 2012 Cascadia Cup. In 2011, the Sounders secured the Cascadia Cup in their only visit to Vancouver. This year, they look to start their defense in the first of two trips to BC Place.

Although Vancouver had some moments in 2011, their performance on the field can only be called a failure. After just one win by the end of May, the Whitecaps made the decision to fire manager Teitur Thordson and appoint Tom Soehn as interim manager. But even a coaching change couldn't improve the results dramatically. With just six wins on the entire season, the Whitecaps finished tied with New England for fewest points in MLS.

That was the 2011 version of the Vancouver Whitecaps. However, the Sounders will be facing a vastly improved Vancouver side. Martin Rennie has facilitated a drastic turnaround from the expansion squad of last year. While Thordson lead the team to just one in his entire tenure, Vancouver has already won five games. Remarkably, Vancouver sits in fourth place in the Western Conference in both the standard table and the points per match table.

So is this version of the Whitecaps for real? There are probably two answer to that question. The 2012 Whitecaps are much better than their 2011 counterparts. However, it doesn't appear that they will challenge the teams at the top of the Western Conference table. While the Sounders, San Jose, and Real Salt Lake are all sporting significantly positive goal differentials, the Whitecaps have actually conceded one more goal than they've scored.

Unfortunately for our neighbors to the north, the offense isn't similarly improved. In 2011, the Whitecaps mustered a dismal 1.03 GFA. In 2012 they are showing virtually identical numbers as they are averaging just one goal per game. The Whitecaps continue to have difficultly putting the ball in the back of the net. As the Sounders defense is currently the best in the league, I don't expect Vancouver to break out of this slump on Saturday.

Additionally, the Whitecaps played a midweek game against Toronto in the Canadian Championship—drawing at one goal apiece. While Vancouver rested Davide Chiumiento and Eric Hassli, only bringing them on midway through the second half, others such as Jay Demerit and Sebastian Le Toux went the full ninety minutes. So for the first time in what seems forever, Seattle may be the fresher team heading into its clash on Saturday.

While Vancouver is an improved team, I'm looking for Seattle to rebound against a team that is still trying to find its form offensively. With a week of rest and a derby match to motivate them, I think Seattle will get back on track on Saturday.